A panel discussion on "Resisting Fascism, Building Solidarities, India Kashmir and Beyond” was held at SOAS, London on 5 October 2019. It was organised by the South Asia Solidarity Group (SASG).

Introducing the event, Kalpana Wilson of SASG spoke about the global rise of far-right, authoritarian, and fascist politics, and said “India’s PM Modi must be counted up there with fascist and far-right leaders like Trump, Bolsonaro, Netanyahu, Erdoğan.”

At one point pro-fascist Hindutva supporters tried to disrupt the event, imitating Israeli strategies as ever with a woefully unconvincing attempt at 'pinkwashing': claiming to be the defenders of LGBTQI rights. This was all the more ridiculous given the acute and open homophobia and misogyny of BJP leaders, and the particularly acute impacts of the lockdown in Kashmir (which the disrupters were defending) for sexual minorities. The chair Dibyesh Anand, himself a prominent queer rights activist, was joined by Nitasha Kaul in asking the protestors to stay and engage. Instead, they went out and set off the fire alarm to disrupt the meeting. But the entire meeting reconvened temporarily outside the SOAS building, slogans against Modi and for a free Kashmir were enthusiastically shouted, speeches continued, and then the participants returned inside with increased numbers. 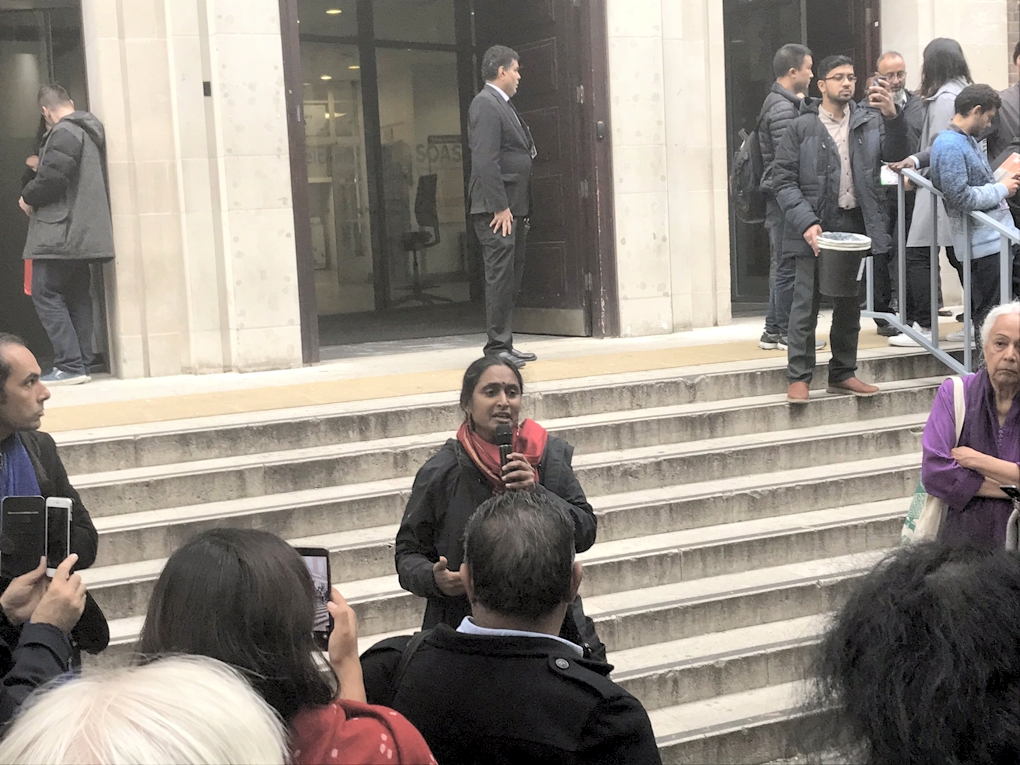 Kavita Krishnan, who had been part of the first teams to visit Kashmir after the lockdown, said that whereas previous Indian regimes wanted silence on Kashmir, the current BJP regime wants to portray Kashmir as a 'rebellious Muslim province' conquered by the Hindu-supremacist Modi. She said that despite all repression, Kashmiris had evolved strategies of resistance and civil disobedience, and were winning the battle of perception globally. She spoke about the Left and progressive movements in India that were mobilising in solidarity with Kashmir and against the NRC.

Nitasha Kaul said, “Kashmir as an unfinished project of the Hindu right goes way back in RSS history. Claim to be bringing LGBT rights is classic colonial homonationalist strategy and indicates the desperation of the global despots.” She stressed that for Indians, “solidarity cannot be based on the idea that Kashmiris are 'our people' but must be because they are people with rights and face a historical issue which has not been resolved.”

Sajjad Hassan spoke about the draconian NRC in Assam and also the openly Islamophobic agenda of NRC and Citizenship Amendment Bill in the rest of India. He said, “All states have been told to build at least one detention centre. This is intended at spreading fear. The ‘foreigner hunt’ ripping communities apart is the BJP's new divisive and polarising strategy after mob lynching.”

Dalit activist and grand nephew of Dr BR Ambedkar, advocate Raj Ratna Ambedkar noted the growing alliance of fascist and far right leaders across the world including Modi. He identified the roots of India’s fascism in caste and communalism.

The second session heard speakers from various movements across the world, on ‘Building Global Anti-Fascist Solidarities’. This session was chaired by Amrit Wilson of SASG. Kashmir Solidarity Movement speaker Mariyeh Mushtaq said “BJP are calling on Indian men to enact rape fantasies of Kashmiri women. Their statements reek of orientalist and colonial understandings.”

Musheir Al-Farra, activist from Gaza spoke on the connections and parallels between Palestine and Kashmir. Activists from Madaniya - Sudan Diaspora Global, Zeena Alhassan and Abd Alraheem Omer also spoke on the situation in Sudan. Dr Adam Elliot-Cooper, anti-racist and anti-colonialist researcher and activist from The Monitoring Group also made connections between various global movements.