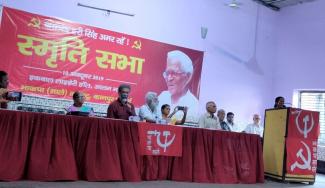 ON 10 October, the CPIML and AICCTU held a memorial meeting at Kanpur for the much-loved trade union leader of Uttar Pradesh, Comrade Hari Singh. Comrade Hari Singh passed away at the age of 80 on 25 September.

Comrade Dipankar said that Comrade Hari Singh was an exceptional trade union leader, who was a fighter not just of trade union battles but of larger political and social battles. Repression of students, oppression of women, communal discrimination and violence, mob lynching – there was no issue or concern which he would fail to address. A leader like Hari Singh is not born in a single day or a single movement – they are shaped by a long journey. When such a leader passed away, it is a great loss for society.

The best way to remember Comrade Hari Singh, he said, was to mobilise workers in the struggle against Modi-made recession and communal hate and violence, and to stand in solidarity with people’s resistance - in Kashmir as well as everywhere in India.