Fighting CoVID-19, Fighting a Pandemic of Cruel and Irresponsible Misinformation 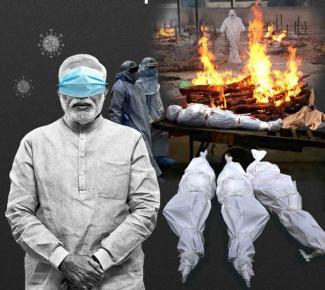 Fighting COVID has meant fighting several battles at the same time. We are fighting for hospital beds, oxygen cylinders, ventilators, injections and vaccines. We are also fighting against distress migration, job losses and growing and crippling economic insecurity, hunger and poverty. But there is another battle too that needs to be waged. The battle against widespread misinformation – cruel, cynical and deeply irresponsible and damaging misinformation campaigns targeting public health measures.

What does this misinformation campaign look like? For one, it is a sustained vilification of precautionary advice put out by public health officials. Super spreader events are being called ‘celebrations’, being ‘asymptomatic’ is being termed as just a nasty word to describe what is actually a perfectly healthy person. The list goes on. As per a meme doing the rounds on Twitter, Facebook and WhatsApp, holidays should not be vilified as ‘non-essential’ travel; meeting family and friends should not termed ‘non-essential’ contact and quarantine is nothing but house arrest. We are being told that the scare around COVID is a manufactured and unnecessary one. All this is apparently an elaborate conspiracy hatched by Big Pharma, with the connivance of politicians who are in their pockets! If we were to believe this campaign, it is Big Pharma which is selling us lies us that a) COVID is a serious scare, b) they have the solution, and c) we will need “booster” doses of vaccines at regular intervals. In other words, what is being touted as a medical model and public health advice is merely a business model to boost profits.

Most dangerously, we are seeing a wholesale vilification of simple public health measures such as universal masking and vaccinations. We are being told that to remain healthy, all we need to do is to expose ourselves to germs and build immunity, eat a healthy diet, maintain healthy interactions, exercise regularly and reduce stress. The narrative is that Big Pharma and politicians are inverting decades of medical knowledge by now claiming that one needs to isolate and stay in a sterile environment to stay healthy, one needs to constantly live in fear and not meet basic social needs of a human being. In fact, in this campaign, masks have been derogatorily termed as “face diapers”! Another meme proclaims: “Science and neutral reporting are increasingly being oppressed”.  This, apparently, is the result of an atmosphere of panic and fear foisted on us by Big Pharma and politicians, World Economic Forum and the World Bank. We are seeing an overt and covert propaganda against vaccines and masking. This propaganda promotes data on how people die even after getting vaccinated; how masks are ineffective.

What do we make of all this? To begin with, the fact remains that part of the reason for this skepticism is the well-documented nexus between scientific research and powerful funding agencies. We know, for example, how cigarette manufacturers influenced and even suppressed research on the impacts of nicotine consumption on human health. However, what we are seeing now is a concerted attempt to derail the work of public health officials; an effort which is laughable at best and downright dangerous at worst. And when such skepticism about masking and vaccines are peddled during a raging pandemic, when people are literally gasping to death  in large numbers and struggling due to lack of health infrastructure, it borders on the criminal.

For example, let us take the example of vaccines. Yes, we need studies on exactly how effective vaccines are. But let us suppose for a minute that two years down the line, we get to know after extensive studies that the Covishield vaccine is not 70%-90% effective as we are assuming now; but is rather just effective in 50% of the population who take it. So, it is not as effective as predicted initially. Does that mean that as responsible citizens, we spend all our time and energy convincing people not to take any vaccines at all? And to just exercise, eat well and build ‘natural’ immunity? Is it not the height of irresponsibility to vilify and demonise a solution that, while not perfect, at least helps to save some lives?

Similarly, let us talk about masking. Yes, the scientific community is constantly evolving its understanding of how effective masking is, and which masks are more effective that the others. Yes, we might come to know some months later that N-95 masks are not as effective as we thought they more. We might come to know that cloth masks need to be supplemented with surgical masks to be truly effective against new variants of the virus. There is always the space for expanding our knowledge. But that does that in the here and now, we spent all out energy telling people to expose themselves to germs and build natural immunity, when the risk is that doing so could well kill them?

Let us ask ourselves what is most needed right now. What is needed is the ability to process ever-growing and yes, ever-changing information about coronavirus and its variants. What is needed is to help people deal with it, protect themselves from COVID. What we do not need is a campaign that could well and truly endanger people, with literally death. We need to equip ourselves with findings from the latest studies, and counter the misinformation campaigns doing the rounds. Some of these campaigns come from well-known misinformation mongers – the likes of right-wing trolls telling us that a cow is a source of oxygen and as effective as an oxygen cylinder. But what is infinitely more dangerous is misinformation and vilification coming from so-called meaning people; misinformation against masking and vaccines that has the potential to endanger people.