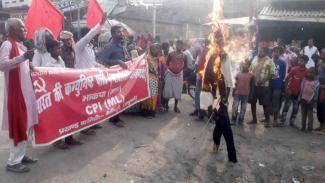 Bihar is currently in the clutches of criminals to whom the Nitish government has abjectly surrendered. Heinous incidents like murder, crime, loot, rape have become the norm, whether it is the recent brutal killing of 4 persons in Madhubani or the police in Bhagalpur mercilessly beating a government employee to death.

The government has fully surrendered to dominant sections and criminals. On the one hand autocracy is being established in the State through Police Raj, while on the other hand the dance of death by criminals goes unchecked. It is the common people who have to bear the brunt of all this.

The prohibition law is wreaking havoc on the poor of Bihar while the illicit liquor business is flourishing under the patronage of politicians and the administration. Despite repeated proofs given by CPIML, the government is taking no action on this and is only indulging in empty self-praise.

CPIML demands that the government should stop using the prohibition law as a weapon to repress and oppress the poor and override proper medical treatment and de-addiction programs for persons who are really addicted, and the deteriorating law and order situation in Bihar should be corrected without delay by the government.

The illicit liquor business in Bihar is flourishing under the politicians-administration-liquor mafia nexus, but Chief Minister Nitish Kumar, displaying his arrogance, repeatedly attempts to deny this truth. As a result today poisonous liquor has become a synonym for the death of the poor in Bihar. Instead of curbing the liquor mafia, the poor are being punished through the draconian Prohibition Act. Only recently painful deaths due to poisonous liquor had occurred in Gopalganj and Muzaffarpur, but the state government learnt no lessons and as a result a dozen more poor persons have died in Nawada and Beguserai.

A CPIML team met the victims' families. The terror of the prohibition law is such that people try to hide the truth out of fear. Therefore timely medical treatment is not done and people die untimely deaths.

The Nawada District administration has washed its hands of responsibility by saying that the deaths are due to heart attack and diarrhea. They are also putting pressure on the victims' families not to talk about poisonous liquor. The truth is that after consuming poisonous liquor all of them first had vomiting and diarrhea, but this fact is now being attempted to be covered up.

Ever since poor persons were sentenced to death by hanging for the crime of liquor consumption in the Gopalganj Khajurbani case, the poor across Bihar are living in terror. They fear that they will also be sentenced to death. What kind of nonsense is this? Fully knowing the truth, the government does not curb the liquor mafia, but on the other hand gets the poor punished through the prohibition law.

Nitish Kumar should acknowledge the truth about the Prohibition Act and first of all dismantle and destroy the politicians-administration-liquor mafia nexus and stop unleashing terror on the poor. The government should make special medical arrangements for de-addiction centres at the sub-division level.

A protest march was organized on 1 April in Nawada against the growing number of poisonous liquor deaths. CPIML expressed deep condolences for the victims.

On 5 April a high level CPIML enquiry team met the family members of the 17 people who have died till date and the 8 people admitted in hospital in the poisonous liquor incident in Nawada, and attempted to understand the truth of the entire matter. The enquiry team comprised Ghosi MLA Rambali Singh Yadav, State Standing Committee member and AIKM leader Ramadhar Singh, District Secretary Narendra Singh, Bhola Ram and AIPWA leader Sudama Devi.

Speaking for the enquiry team, MLA Rambali Singh Yadav said that the death toll has reached 17 due to administrative negligence and terror of the draconian Prohibition Act. If the administration had taken timely action, many lives could have been saved. The area in which the incident occurred is right behind the DM's office in the city. Lower level police personnel are being targeted in the matter in order to protect the truly guilty persons. The team demanded strict action against the DM, SP and the liquor mafia. Nitish Kumar must apologize to the people of Bihar. The Prohibition kaw has failed absolutely. Bihari society is coming into the clutches of poisonous liquor. This illicit liquor business cannot be run without the politicians-administration-liquor mafia nexus.

On the other hand, the terror of the draconian Prohibition Act is such that even hospitals and relatives hide the truth about alcoholism. As a result, victims do not get timely treatment and they are pushed into untimely deaths. The attitude of the police-administration in this matter is extremely negative. They use force and put pressure to hide the true nature of the deaths. All these facets have come out into the open in Nawada.

The enquiry team visited the affected mohallas including Budhoul, Gendapur, Siswan and Kharidibigaha. They met the families of victims Gopal Sharma, Bhushan Rajvanshi, Prabhakar Gupta, Loha Singh, Dinesh Prasad, Ramdev Yadav, Akash Kumar, Shivshankar Yadav, Dharmendra Kumar, Sanoj Kumar Mishra aka Sonu, and others. In the morning of 30 January when the condition of those who had consumed poisonous liquor started deteriorating and they were taken to hospital, the initial reaction of the hospital was to tell them, take these people back otherwise it will become a case of alcohol consumption. Only after 2 or 3 deaths was the administration forced to conduct post-mortems, bringing out the fact of liquor consumption. If the hospital had begun timely medical treatment many lives could have been saved, but the draconian Prohibition Act has created an atmosphere of terror in the entire area.

Despite the post-mortems showing proof of poisonous liquor the police forced the victims' family members to write that these deaths were caused by heart attack or epilepsy. When the enquiry team went to deceased Bhushan Rajvanshi's house they saw that 2 police personnel were already seated there on chairs. Under pressure from the administration the victim's daughter told us that his death was due to tension and not to alcohol, whereas the report says otherwise. The most shameful thing was that when our team was returning from Genda Bigaha, the police attacked the village and beat up people for the alleged crime of talking to us about liquor! It appears as if Nitish Kumar has decided to destroy Bihar totally. This matter should be probed.

Nitish Kumar's officials are sitting inside Circuit House and enquiring into the matter. Clearly they want to wash away the case lightly. The police has nabbed a poor corn-seller woman Mata Devi and sent her to jail, and suspended a chowkidar Vikas Mishra on the charge of manufacturing poisonous liquor. Thus a veil is being laid over the actual liquor mafia-administration nexus.

CPIML demands that the government should pay Rs 20 lakhs compensation and a government job to each of the dead victims' families, proper medical treatment at government expense for the 8 people being treated in hospital, and immediate action against the DM and SP.