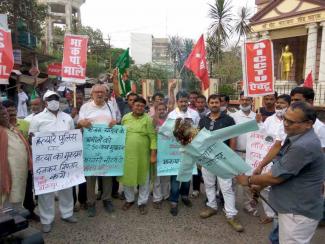 CPIML and RJD jointly organized a protest on 30 March at Ghanta Chowk in Bhagalpur against the brutal beating to death of Irrigation department employee Sanjay Kumar by the police at Barari Thana. Mahagathbandhan activists protested by burning Chief Minister Nitish Kumar's effigy and raising slogans against the brutal killing and demanding the repeal of the Bihar Special Armed Police Bill 2021.

The protest was led by CPIML State Committee member SK Sharma, District Secretary Bindeshwari Mandal, AICCTU State Secretary Mukesh Mukt and RJD District President Chandrashekhar Yadav. The leaders said that Police Raj has been imposed on Bihar through the Bihar Special Armed Police Bill 2021. The police dance of death on Holi day 29 March led by the City SP and the Barari Thana in-charge is a consequence of this. The police picked up Irrigation department employee Sanjay Kumar from his home and beat him so brutally that he died on the spot in the Thana.

CPIML and RJD demanded the removal and arrest of the Bhagalpur City SP and the Barari Thana in-charge and strict punishment for them under murder charge. CPIML and RJD also demanded Rs 50 lakhs compensation to the family of deceased government employee and a government job for his dependent.