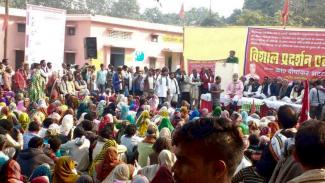 A sit-in was organized on 20th January, 2018 at Chandauli, Uttar Pradesh to demand the arrest of the killers of Comrade Dinesh Rajbhar, a district committee member of the party in Chandauli district of Uttar Pradesh. Comrade Dinesh was murdered on 16th December, 2017 when he was returning to his village after attending a People’s Tribunal on Forest Rights in Varanasi. The killers, waiting for him in a jeep, suddenly pounced on him while he was crossing a bridge over the river Ganges along with his mother-in-law. They threw him in the river where he drowned and died. Comrade Dinesh was fighting a legal battle for the ownership of a valuable piece of land. The killers were hired by his criminals, who had been conspiring to eliminate Comrade Dinesh and usurp the disputed land.

Immediately after this murder, a BJP minister Anil Rajbhar, who hails from the region, reached the site of crime with media persons and gave a statement that a farmer had drowned in the river after falling from the bridge. It is alleged that the minister was in contact with the opponents of Comrade Dinesh and was in knowledge of the on-going legal tussle for the disputed piece of land. Fingers are being pointed about his role in this crime because of the expediency showed by him in declaring a murder as a simple accident.

On getting the news about the murder, party leaders reached the spot and pressurized the police to search for his body. His body was recovered by divers and was sent for post mortem. The cause of his death was reported to be due to drowning. The police filed an FIR for a case of death by drowning and not as a murder.

When after one month of the murder, no arrests were made by the police even after the names of the suspects were given to them, the party organized a sit-in where people from the districts of Chandauli, Mirzapur and Ghazipur attended in large numbers to lodge their protest against the police inaction.

The main speaker was Comrade Dipankar, General Secretary of the party. While addressing the protesters, he said that the Yogi rule in Uttar Pradesh had turned into a nightmare for the oppressed sections of the state. The election slogan of BJP was to weed out the Goonda Raj of the erstwhile Samajwadi Party government. In reality however, it was the poor tribals of the state that were being evicted from their lands in the name of implementation of the Forest Rights Act. He accused the Uttar Pradesh of working in the interest of the land mafia and expressed surprise at the fact that even when a witness (mother-in-law of Comrade Dinesh) was present at the scene of crime, the police was not accepting her statement about the crime and filing an FIR for murder. Comrade Dipankar said that the promise of the Modi government to provide 2 crore jobs every year had turned into a damp squib. Now to divert the attention of the people, issues like ‘cow protection’, ‘love jehad’ etc. were being brought to the fore. The BJP was silencing the voice of its opponents- be it Gauri Lankesh in Karnataka and Comrade Dinesh in Uttar Pradesh. Even senior judges of the Supreme Court of India are speaking about the curtailment of democracy in the country. He urged the people to rise up in solidarity against the heinous designs of the BJP-RSS to stifle democracy in the country.

The protest sit-in was also addressed by Comrade Sudhakar Yadav, State Secretary of Uttar Pradesh, Central Committee member Iswari Prasad Kushwaha, Comrade Jeera Bharati, and Comrade Ram Pyare Ram. The meeting was conducted by Comrade Shashikant, the District Secretary of Chandauli. Later, a memorandum was handed over to the SDM of Chandauli in which demands were made for the immediate arrest of the killers of Comrade Dinesh. 