Skip to main content
Commentary 02 February 2018
No to Netanyahu, No To Complicity With Israel's Apartheid 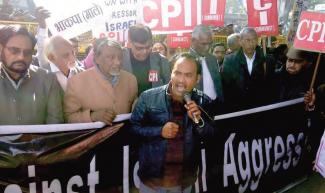 (Statement by Activists, Academics and Concerned Citizens issued on the eve of Israeli PM’s India Visit)

IN the coming week, Israel’s prime minister Benjamin Netanyahu will tour different cities of India along with Prime Minister Narendra Modi. This visit comes at the beginning of a year that sees Israel globally ever more isolated and ever more aggressively advancing its ethnic cleansing and annexation of Palestinian land. To invite the leader of Israel’s apartheid regime for a diplomatic visit is nothing short of an open endorsement of Israel's crimes and ominous for the Palestinian and the Indian people.

2018 marks 70 years since the Nakba, the ethnic cleansing of Palestinians to forcibly establish Israel. The process of making Palestinians refugees, destroying villages and towns, conquering lands that began then continues till today. Israel has established a regime of settler-colonialism, occupation and apartheid against Palestine which operates in utter violation of international law and human rights. Israel’s exceptionalism rests on the support it still receives from western imperialist powers and increasingly now from India.

After the US decision to recognise Jerusalem as the capital of Israel in violation of international law and Palestinian rights, the thuggishness of both Trump and Israel have been opposed by the entire world in the UN General Assembly resolution ES 10/L.22 in which 128 countries voted against this decision. This was met with open threats by the US Ambassador to the UN. And now, Modi rolls out the red carpet for Israel, all out to build the alliance of Hindutva and Zionism and to strengthen a Trump-Israel-Modi axis of anti-democratic policies of exclusion, repression and supremacy.

This visit is being hailed as a milestone in Israel-India relations. What really have these relations done for India? India is the biggest importer of Israeli weapons, which go on to strengthen the capacities of repression of the Indian government against any form of dissent and undermine our democracy. Israel’s technology in agriculture is bringing forth unsustainable contract farming models. Despite having been shown to be disastrous in its impact, Israeli state and corporate investments in Indian agriculture are garnering favours by state governments. Israel is assisting the increase in surveillance technology, it is privatizing water resources, and yet it is being celebrated by pro-government agencies. These trade and military relations finance the repression of Palestinians and help Israel’s PR attempts to whitewash its crimes.

There is another connection between Modi and Netanyahu- their visceral fear of resistance. Palestinians have shown the path to the rest of world with their valiant and ongoing resistance in the face a brutal regime, sustained by imperialist powers. 12 years ago, Palestinians have called upon the world to join their resistance by building a movement for Boycott, Divestment and Sanctions (BDS) movement. This movement has grown across the world to become one of the biggest challenges to Israel’s apartheid in its efforts to hold Israel accountable for its crimes and isolating it till it respects Palestinian human rights.

Israel is currently engaged in an all-out 'war on BDS' but it is compelled to acknowledge that all its money and military cannot stop people from acting in solidarity. The movement continues to grow. Similarly, in India, dissenting voices of Dalits, minorities, farmers, students, journalists, etc. are regularly threatened, attacked and even killed by henchmen of the ruling regime and delegitimized as ‘anti-national’. Four senior judges of the Supreme Court of India have recently expressed their grave concern at the state of democracy in India, showing just how each aspect of civil rights and freedoms in India is under threat.

Palestinians were inspired by the Indian experience of boycotts when they launched their call for BDS. Today, we have to remember the history of Indian solidarity with Palestine and inspire ourselves with the steadfastness and courage of the Palestinian resistance.

We, the undersigned, refuse to be a part of the growing complicity of India in Israel’s crimes. We are deeply aware of the political climate of India today and how, with this alliance of Hindutva and Zionism, we are endangering our future as a nation. It is more important than ever before for the progressive and liberal political forces and individuals to come together to extend steadfast solidarity to the Palestinian resistance. Standing for Palestine is to stand for justice, freedom, equality and secularism- in Palestine, in India and everywhere. Supporting the BDS movement is to stand up to corporate bulldozing everywhere. Standing for Palestine is standing on the right side of history. Therefore, we wish to state in absolutely clear terms- Netanyahu is not welcome here!