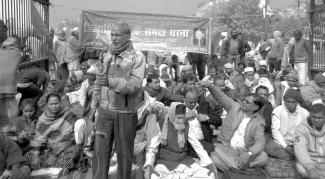 CPI(ML) Nalanda District unit, Insaf Manch, RYA and Bihar State Vidyalaya Rasoiya Sangh held a dharna in front of the Nalanda Collectorate on 6 January 2018 to demand the unconditional release of former JNU student, RYA Bihar State Council member and ‘Not in My Name’ movement leader Com Manmohan, and withdrawal of all false cases against him.

The arbitrary arrests of activists in Bihar is proof of the undemocratic character of the Nitish-BJP Government. On 17 July 2017, a peaceful, bannerless silent demonstration in Bihar Sharif (inspired by the Not In My Name protests) by the Insaf Manch against mob lynchings and the terror attack on the Amarnath Yatra was brutally lathicharged. Participants in the protest, and even ordinary Muslim bystanders were beaten up and jailed en masse. The same administration allowed a rally by the Bajrang Dal that openly displayed arms and shouted threatening slogans. This episode was an early warning signal of the shift in the weather-vane of Nitish Kumar’s politics, indicating that he was no icon of secular politics but was in fact playing footsie with the fascists. Barely ten days later, Nitish had betrayed the Bihar mandate and broken the Mahagatbandhan to form Government with the BJP.

Comrade Manmohan, a former JNU student and AISA activist and currently a leading CPI(ML) activist in Nalanda, who had also been leading struggles for the rights of Biharsharif Municipal Corporation sanitation workers, has now been framed and arrested for organising the silent peace march of 17 July 2017. Protests are being held all over Bihar demanding his release. 