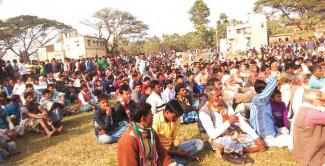 On 17 January 2018 – the first anniversary of the killing of two young men Mafizul and Alamgir in firing by the nexus of West Bengal police and TMC thugs – a public meeting was held at Bhangar. The public meeting was called by the Committee for Protection of Land, Livelihood, Ecology and Environment which is steering the movement. Family members of the victims as well as hundreds of people from several villages, and members of the Bhangar Solidarity Committee attended the meeting.

The families of Mafizul and Alamgir said that till now – a year on – they have not even got death certificates. The local TMC is saying they will operationalise the power grid before the panchayat polls, but the Committee for Protection of Land, Livelihood, Ecology and Environment that is leading the people’s movement is determined to stall it untiPublic Meeting: The First Anniversary of the Bhangar Martyrs l the Government addresses the people’s concerns. Initially the Mamata Banerjee Government had claimed that local people have no grievances or losses; but now the Government is expressing willingness to compensate people in cases where the power grid lines pass over their land. But brick kilns and fish bheries (embanked water bodies) are being branded “illegal” to deny them compensation. The Government is completely unwilling to enter into any discussion or negotiations with the movement. 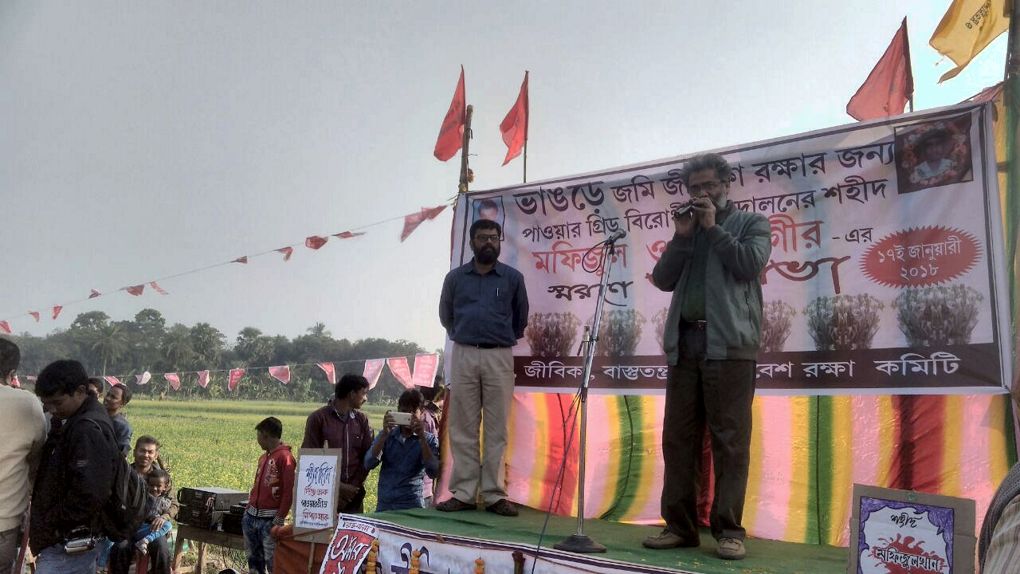 Addressing the meeting, Comrade Dipankar hailed the Bhangar movement for its year-long struggle. He said that at the Bengal Global Business Summit (held on 16-17 January at Kolkata), the central slogan was ‘Bengal Means Business’. He asked, what does Business mean? Does business mean displacement and state terror? Bengal has already shown won’t brook this model of ‘business’, he said, and the TMC Government and its thugs will be taught a lesson. He spoke of the peasants facing similar attacks and firing on movements all over India – quite recently in Mandsaur and in Jharkhand – and the all India peasant movement that has arisen against these attacks. He said that the BJP, in India as well as in West Bengal, were hell bent on creating communal divisions among people - and people’s movements must robustly resist communal politics and assert unity. He spoke of the labourers from Malda in West Bengal – like Afrazul who was brutally killed in Rajasthan in a videotaped communal hate crime, and Shakir who also died in mysterious circumstances in Rajasthan, saying that while the BJP propagates the myth of “Muslim appeasement”, the fact is that Muslims are at the receiving end of discrimination and violence – in West Bengal and in Rajasthan too. He called upon people’s movements to unite to resisting the fascist BJP-RSS aggression as well as the TMC thuggery and repression. 