The CPI(ML) condemns the shocking insensitivity and neglect of the Central Government towards flood-devastated Kerala.
In spite of repeated requests by the State Government and concerned people all over India, the Centre has refused to declare the deluge a national calamity.

The Prime Minister made a belated visit to Kerala, but he failed to release the Rs 2000 crore requested by the Kerala Chief Minister for relief and rehabilitation of people and rebuilding of the state. Instead he added just a meagre Rs 500 crore to the Rs 100 crore the Centre had already released. The Central Government is also seeking to block aid offered by various international sources. Such deliberate neglect exposes the true face of BJP’s claims of cooperative federalism. Clearly the Centre’s attitude is driven by political vendetta towards Left-ruled Kerala.

At the same time the Sangh Parivar machinery is spreading misinformation in the effort to derail and communalise the relief efforts, and is busy maliciously claiming the floods are divine punishment for - variously - beef eating or women seeking entry into the Sabarimala temple!

Meanwhile the Centre’s callousness is in contrast to the herculean rescue and relief efforts being made by members of the forces as well as by civilians in Kerala as well as the rest of India. Special mention must be made of the fish-workers whose fishing boats are reaching and rescuing people in isolated areas where even the Navy boats are unable to reach.

The CPI(ML) has appealed to its members and committees all over India to collect relief for the people of Kerala. 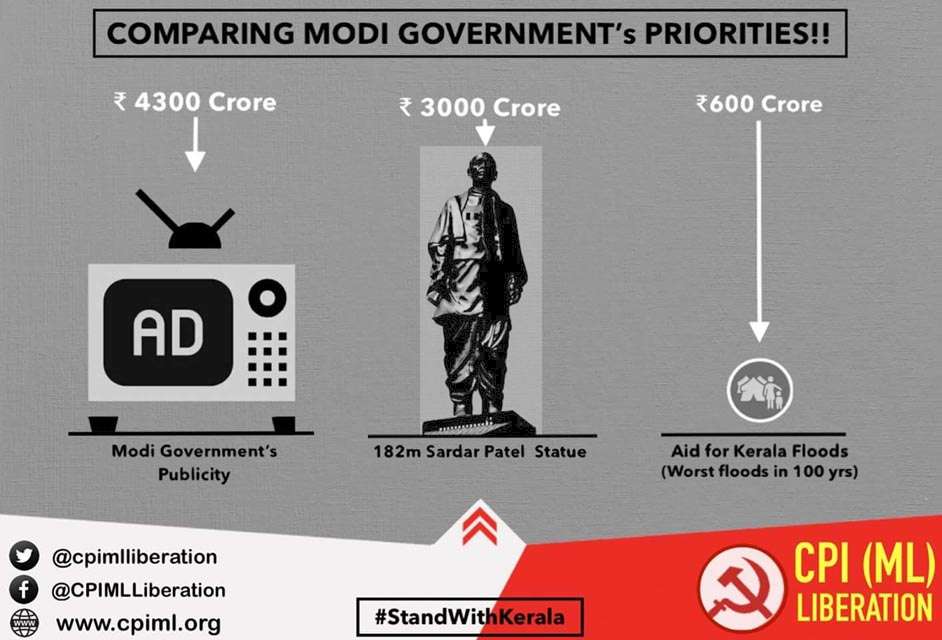