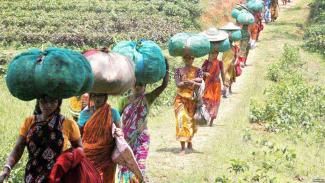 Daily-wager tea workers of both West Bengal and Assam are starving. After Indian Railways, Tea is the 2nd largest labour-intensive industry of the land where a few million workers are deprived even of subsistence wages, suffering a legion of starvation deaths, not restricted only to closed tea gardens.

To counter the myth that tea gardens are loss-making for employers and the perpetual backlash against workers’ demand even for the realisation of a structured Minimum Wage, 29 trade unions operating in tea sector of West Bengal joined hands to create a ‘Joint Forum’ way back in 2014 through a workers’ convention at Chalsa in Dooars region of the tea belt in North Bengal.

In the wake of a vibrant workers’ solidarity movement, the Mamata Government assured the unions to implement MW for the first time in the history of more than 150 years tea industry in Bengal and a tripartite agreement was signed to that end on 20 February 2015. A similar ferment was also seen in Assam gardens.

All through the last  three and half years, the Joint Forum could achieve the respect and acceptance of 4.5 lakh tea workers of Bengal with its united mass movements. But the demands for Minimum Wages, realisation of the monetised value of their legitimate rations as provided earlier as part of wage, a tract of homestead land for permanent workers, opening of closed estates and enhancing the retirement age of permanent workers from the present 58 years to 60 years etc. remained a mirage due to behind-the-curtain deals between the state government and the employers. 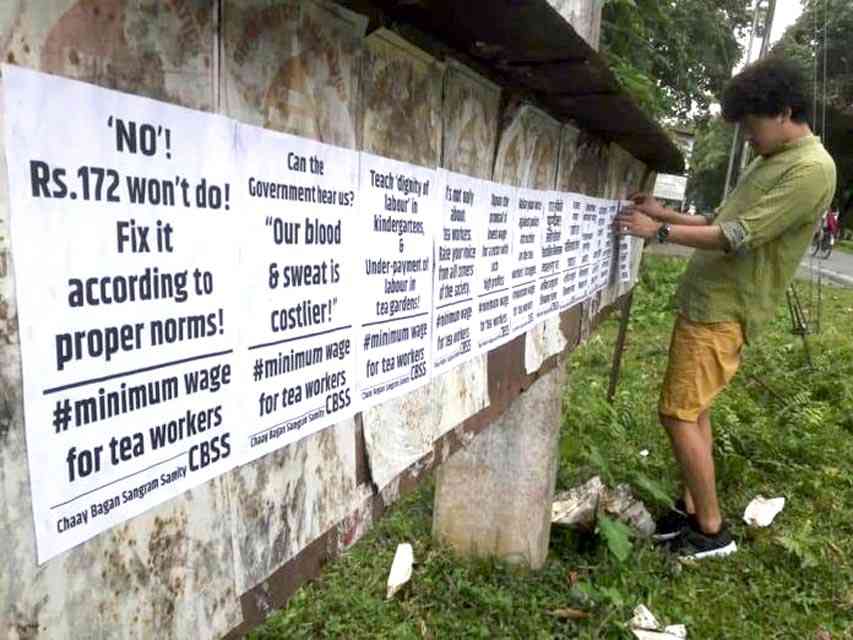 The labour directorate of the state ultimately placed an amount of Rs. 172 on 6 August as being the proposed MW, notwithstanding the very basics of MW calculations. They completely failed to consider the base index of Industrial workers, the cost of a balanced food basket, the monetised value of fuel and electricity as 20% weightage and 25% more to add as cost price of education, health, old age provisions etc. to keep afloat the employers’ excessive profit ratio. The constituent unions of Joint Forum placed before the labour secretary their considered calculation to continue the negotiations. But he unilaterally called it quits, leaving the tripartite parleys at an end.

The Joint Forum (Tarai Sangrami Cha Shramik Union, affiliated to AICCTU being one of the constituents) gave a call for 3-days strike in the tea sectors of Bengal on 7-8-9 August 2018 and asked the workers of every tea garden both from the hills and the plains to take to the streets to start a long march to reach Mamata’s  Mini-Secretariat ‘Uttorkanya’ at Siliguri.

On the 9th of August, hundreds of tea workers from Thorbu, Tingling and adjacent five other gardens of Mirik hills struck their work and began a long march towards Siliguri. When they reached near Sonada bazaar a massive police force under the local OC obstructed their way. The workers and trade union leadership squatted on the road forcing the police to retreat. Later the police administration clamped non-bailable sections on 11 JF leaders. 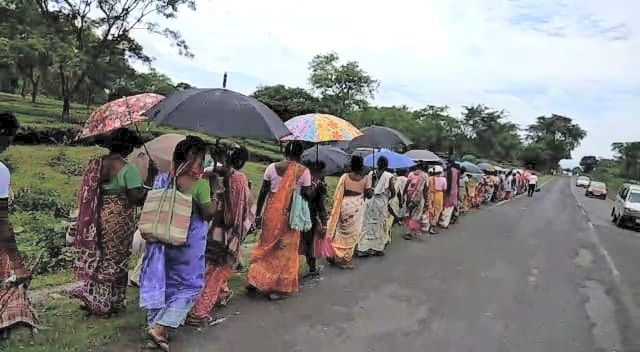 Such a massive and unprecedented workers’ march had been halted with much trouble by the police administration at 48 different points as they tried to stall the strike mid-way. Undaunted the strikers went ahead. Dispatch of made tea was blocked in the hill gardens too.

The irate labour minister of the state had convened an emergency meeting only with the employers and few leaders from ruling party unions on 16 August. In that meeting, attended only by the employers’ representative and few union leaders toeing the official line, the Labour Minister unilaterally declared an interim relief, amounting to Rs. 10 from the month of September and additional Rs. 7 from the month of October 2018, thereby increasing the pluckers’ wage to a meagre Rs. 176 by the end of this year.

Joint Forum, in its 18th August meeting at Siliguri took stock of the prevailing situation. This leaders’ meet resolved to salute the tea workers’ of the state for observing the strike en masse, demanding immediate fixation and enforcement of Minimum wages. Constituent unions of JF unanimously registered their strong protest on the uncalled for deployment of police to intimidate the striking workers. They also condemned the suo motu case lodged on the union leaders by Jorebungalow police. They assessed the declaration of interim by the MIC, Deptt. of Labour, Government of West Bengal  as a measure to escape from his constitutional responsibility of enforcing MW. By way of proclaiming some sorts of interim obviously leads to a chaotic and differential rates of wages in different plantations in the state and it is nothing saved an effort to avoid the lawful for a on industrial issue. JF seeks to escalate the movement in the last week of August if the state government fails to finalise a revised MW wage structure for the struggling tea workers of Bengal at the 11th round of MW Advisory Committee Meeting slated on 23 August. 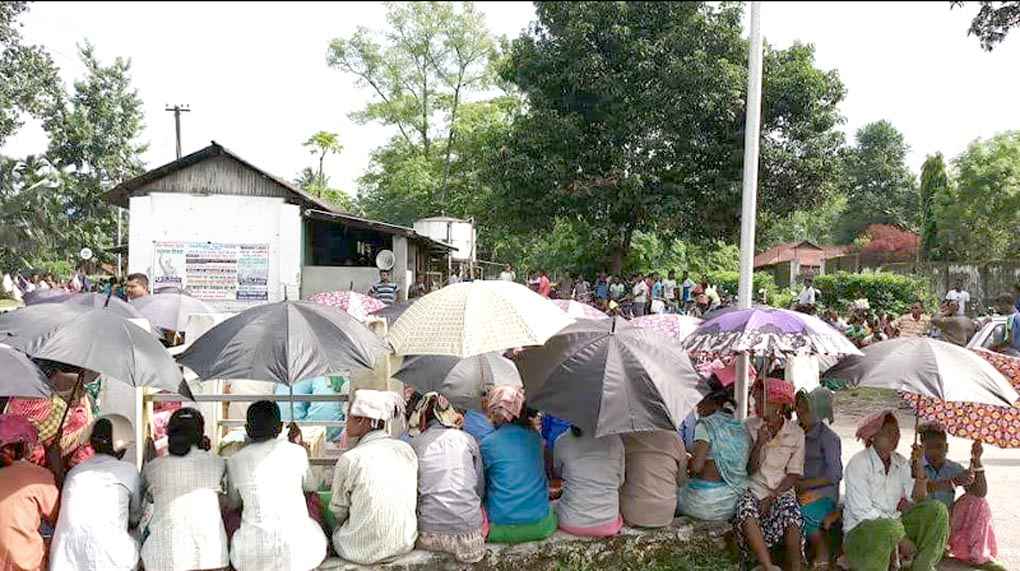 On 20th August, 2018, the Joint Action Committee of Tea Workers Wage (JACTWW) called a day long strike (Bagisa Bondh) on the demand of Rs 351.33 per day wage of tea workers. This is longstanding demand of tea workers of Assam, and JACTWW has been build up struggle on this demand. JACTWW is the common platform of Left TUs and Tea Nationalities organizations comprising Asom Sangrami Chah Shramik Sangh, Akhil Bharatio Chah Mazdur Sangh, Asom Majuri Shramik Union, Chah Mukti Sangram Samittee, Asom Mazdur Union, All Assam Adivashi Students Association, All Assam Adivashi Mahila Samittee etc. In every part of Assam, the tea workers’ strike was very successful: most of the major tea gardens of the Brahmaputra valley remain closed due to strike. The tea factories also were closed. More than 6 lakh tea workers participated in the strike. To take the example of one district: out of 16 gardens of Biswanath district,15 gardens were closed.

Before the Strike, an all-party meeting was held at Guwahati in support of the strike, where CPIML, CPI(M), CPI, AAP, LDP participated. On the other hand the Congress-led Union ACMS (Asom Chah Mazdur Sangh) tried to foil the strike in every possible way, but tea workers defeated them, exposing how ACMS is helping the BJP Government suppress the tea workers’ rights.
In support of the tea strikers’ demands, the Labour Minister’s effigy was burnt on 20 August in Dibrugarh.