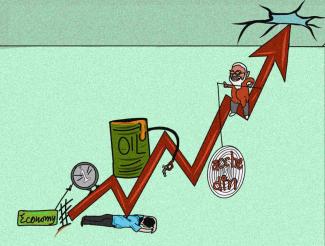 Data from Centre for Monitoring Indian Economy (CMIE) has pointed out that unemployment in India has risen from 6.5% in March to 13% in June. Urban unemployment increased to as much as 9.78%. These figures demonstrate that despite the Modi government’s repeated claims to the contrary, the rapid rate of job losses have not stopped. The evidence was corroborated by a survey released by IHS Markit that demonstrated the rapid rate of loss of jobs in key sectors like manufacturing.

In March 2020, the government had imposed one of the strictest lockdowns in the world, claiming that India would be able to defeat COVID-19 within the span of three weeks. This was followed by grand declarations by the Finance Minister of robust government spending that would spruce up the economy. At the same time we saw the mass exodus of Indian workers from major urban centres who were forced to walk hundreds, sometimes thousands of kilometres back to their villages.

The lockdowns imposed in May 2021 were a further blow to an already battered economy with the CMIE estimating that nearly 17 million daily wage labourers and small traders were forced into unemployment. A follow up report points out that “there is also a steady fall in the employment independent of the lockdowns”. This indicates the general trend of the ‘jobless growth’ that has characterized the Modi regime, with job losses in the public sector and replacement of permanent posts with contractual employment. The CMIE predicts that nearly one third of the jobs eliminated by the lockdown will not be recovered.

This comes at a time when India’s GDP growth seems to be unable to make expected progress. In April, Oxford Economics, which had predicted India’s GDP to grow at 11.8% in 2021, downgraded its estimate to 10.2%. Around the same time, the ratings agency Moody's revised its forecast for India's economic growth in the current financial year downwards to 9.3 percent from an earlier projection of 13.7 percent. India’s debt burden relative to its GDP is also expected to grow. It must be remembered that India’s GDP contracted by 7.97 percent in 2020, and only showed a marginal growth of 4.04% the year before.

A recent report by Bank of America (BofA) Securities revealed that the Indian IT outsourcing companies could see 30 percent reduction in low-skilled jobs globally by 2022 due to Robotic Process Automation (RPA) upskilling. The report titled Robo Sapiens: Future of Work Primer  argues that nearly a third of the current jobs will be eliminated by automation as robots will be 5% more productive and 1% cheaper annually over the next decade. What is relevant is that automation of back-office work means that nearly one hundred billion dollars of ‘salary costs’ will be eliminated. This means that many of those employed in back-office work will be pushed further into precarious employment or into the so-called ‘gig economy’.

NASSCOM has however contradicted the claims stating “With the evolution of technology and increasing automation, the nature of traditional IT jobs and roles will evolve overall leading to creation of newer jobs. The Industry continues to be a net hirer of skilled talent, adding 138,000 people in FY2021.”

Essentially, the claim made by NASSCOM is that the jobs in the IT sector are secure because despite the ongoing process of automation, the sector has been a ‘net-hirer’. Of course being a net hirer does not mean that those currently in employment will be retained or will have equal levels of job security. There is no clarity regarding the process of reskilling and most of those employed in the jobs that are at the highest risk of being automated have no job security to speak of.

The report however has sparked concern with the Pune based Nascent Information Technology Employees Senate (NITES), an organisation working to protect interests of IT employees, appealing to the Maharashtra government to establish an independent board for the IT / ITES sector to protect the welfare, rights and families of employees.

India’s Non Profitable Asset (NPA) crisis seems to be growing deeper as Indian banks have written off loans worth Rs 1.53 lakh crore in 2020-21 to show reduced NPAs on their accounts. This is deeply troubling as Rs 2.54 lakh crores NPA were written off in the financial year 2019-20, which was the highest in the decade. What is even more concerning, is that experts have predicted a rise in bad loans to 13-15% in the current fiscal year.

Recoveries have taken a significant hit as many micro-finance institutions have been sharply been hit by the economic crisis that has accompanied the COVID19 pandemic and the subsequent lockdowns. Tourism, hospitality, restaurants, salons, aviation, construction, textiles and high-contact services are among the worst-affected segments. The blame for the current crisis however lies squarely on the BJP government, which has failed to support the most vulnerable sections of the society during the pandemic.

An Oxfam report had pointed out back in January that the wealth of Indian billionaires had increased by 35%, an amount which would be enough to provide the poorest 13 crore Indians with nearly one lakh rupees each. In fact this is a part of a global trend that has seen the world add 607 new billionaires while the vast majority of people suffered during the crisis.

It must be pointed out that an RTI in 2017 had revealed that big corporate entities held Rs 9.5 lakh crore in NPAs.  An IndiaSpend report also pointed out that top 12 corporate NPAs cost more to the exchequer than farm loan waivers, lest anyone be tempted to lay blame on the farmers and small lenders for the current crisis. The current crisis is very much the result of ‘corporate friendly’ policies of the union government that have made them less accountable to the public, while benefitting off the taxpayer.

It is important that political pressure is generated so that any fresh write-off must be done in consultation with the vast majority of Indians, who have been adversely affected by the process and must bear the burden of the irresponsible risks taken by corporates.