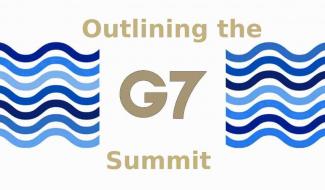 The G7 Summit, held between 11th and 13th June in Cornwall, UK in the backdrop of the ongoing COVID19 crisis and the deadly ‘second wave’ of infections in India. Key issues on the agenda were to ensure effective and rapid vaccination, climate change, and an end to tax havens. India was invited by the UK along with Australia, South Korea, and South Africa to be a part of the summit.

Since its very inception as the ‘Library Group’, the G7 has acted as a consultative body for the advanced global economies, where their interests could be consolidated. Given that many of the countries in the current G7 have been accused of hoarding vaccines, while many in the Global South (particularly India and South Africa) have been unable to procure enough for their own populations, the stark differences remained on issues that needed to be sorted out.

The US president Joe Biden has been championing the cause for a global corporate tax arguing that the current system incentivizes corporations to stash their profits in overseas tax havens while encouraging a global ‘race to the bottom’ for corporate tax rates. This is undeniably true as global corporate taxes have fallen from a global average of 49% in 1985 to 23% in 2019. Most of these earnings end up stashed in tax havens like Bermuda, the Caymans, Ireland, the Netherlands, Singapore and Switzerland. In a speech by US Secretary of the Treasury Janet L. Yellen to The Chicago Council on Global Affairs, emphasized on the need for a global corporate tax. While the initial proposal by the Biden administration was for a 21% global minimum corporate tax rate, further negotiations have seen the figure slide down to as low as 15%.

While accepting the need for a global minimum corporate tax, Gabriela Bucher, Executive Director of Oxfam International, pointed out that the 15% rate is far too low and comparable to the soft rates charged by existing tax havens. She points out that “Billions of dollars in revenues lost to tax havens each year would flow to wealthy countries where most of the large multinationals like Amazon and Pfizer are headquartered ― regardless if their sales and profits are actually made in developing nations. The G7 can’t expect the majority of the world’s countries to accept crumbs from its table”. Oxfam lends its support to the Independent Commission for the Reform of International Corporate Taxation (ICRICT) demand for a global minimum corporate tax of 25%.

Dani Rorik, Professor of International Political Economy at Harvard University, pointed out that certain developing economies rely on tax incentives to attract FDI. Most of the share of the tax income would flow towards high income countries where the sales are made whereas low income countries, which often provide labour and raw materials might be left behind.

A remedy has been suggested by Emmanuel Saez and Gabriel Zucman at the University of California, Berkley that proposed to levy a tax of 0.2% on publicly listed companies’ stock market capitalization – the value of their shares. Taxes raised could be allocated proportionally to the sales made in each country, which would include non-G20 countries.

While the effect that a new global tax regime on India isn’t apparent, it is unlikely that the Indian economy will remain unaffected by the changes. India held an unfavourable stance towards the initial 21% minimum tax rate, especially since India had lowered the corporate taxes on newly incorporated companies in 2019 to 15%. The general consensus, especially among corporate consultants, is that India will benefit as it has a large market for big tech companies. However with increasing inflation nullifying any improvement in the purchasing power of Indians and weak economic recovery in the aftermath of the pandemic, India could soon lose its sheen as a market.

Another key agenda on the G7 meet was that of Climate Change. A study by the Swiss Re Institute demonstrates that in the case of an increase of global annual temperatures between 2-2.6 degrees Celsius would result in a shrinking of global economies by more than 11% and the Indian economy shrinking by a quarter.

One major commitment made was on the phasing out of coal powered industries as a major source of global warming and a shift towards ‘Green Energy’ sources. The G7 committed to spending $2.8 billion towards incentivising developing countries to transition from fossil fuels into environmentally sustainable solutions. The target is supposed to limit global warming to 1.5 degrees celsius. The 2021 United Nations Climate Change Conference (COP26) to be held later this year in Glasgow is likely to deliberate on this issue further.

The idea for a ‘Green Belt and Road Initiative’ has been pitched, with the implicit idea of countering China’s ‘Belt and Road’ plan for massive investments in Central Asia, West Asia, Eastern Europe, Africa and SE Asia. Such an approach however has the potential to be rendered counterproductive as it emphasizes on applying a geopolitical lens to a problem that requires a collaborative solution.

This confrontational approach was seen in the revival of the theory that COVID19 was developed in a Wuhan lab as a potential bioweapon, an idea first pitched by Donald Trump which has significantly hampered initiatives to prevent the spread of the virus and strengthens ‘anti-vaxxer’ arguments.

The G7’s commitment to deliver 870 million vaccine doses by the end of 2022 falls far short of both need and expectation. Many of the G7 nations have been criticized for withholding and stockpiling vaccine doses that were multiples of their population, while others like India were left out to dry. Though this criticism doesn’t take away any of the blame that lies with the Indian government for exporting millions of vaccine doses even as a majority of Indians remained unvaccinated.

The joint statement released at the end of the meeting emphasized on the need to establish a global framework for detection and identification of emerging diseases and the swift development of vaccines. This requires a shared commitment to scientific progress regardless of geopolitical contradictions.

The Commitment to Open Societies

The G7 emphasized on the commitment to ‘open societies’, democratic values and multilateralism. Among all the declarations made at the G7 summit this one rung the hollowest. The United States, has been plagued by accusations of voter suppression in Republican led states with many US lawmakers even currently making various attempts to overturn the popular mandate of the 2020 US Presidential elections. The mistreatment of immigrants, the police violence and disproportionate incarceration of Black and racial minority groups in the US found no mention as the term ‘systemic discrimination’ was found in the declaration.

India’s objection to a blanket critique of internet shutdowns was also accommodated and the term ‘politically motivated internet shutdowns’ was introduced in order to allow the Indian government a space to weasel itself into the declaration. The crimes of the BJP in shutting down all access to internet in Kashmir, as well as various parts of India during the protests against NRC-CAA-NPR and the Kisan Andolan cannot be ignored. Neither has the Yogi government’s arrests of healthcare workers for speaking out about the condition of hospitals or even mentioning the crisis caused by the second wave of COVID19 escaped attention.

Even in the aftermath of the G7 declaration, the Indian consulate in Toronto, Canada wrote to a school in the city accusing it of spreading hatred for teaching its students about the Kisan Andolan. This should speak to the credibility of the G7’s commitment to transparency and freedom of speech, given that Canada is a member of the G7.

The G7 while raising many of the issues that are of real concern, have rarely taken up any concrete steps capable of addressing them. Let us take the example of the issue with tax havens, it has come to be universally understood that the low benchmark 15% lets companies that have engaged in stashing profits abroad off the hook. More importantly the discussion does not address the fact that while capital flow is globalized, there has been no talk about taking steps towards a ‘globalized labour regime’ that can put an end to the superprofits earned by MNCs. Similarly the talk of the economic cost of the pandemic or climate change completely ignores the very real human cost that has been inflicted on the working class people of the world.

What the G7 demonstrates is that there is a real need for a forum for people-to-people discussion regarding the very real problems that we face rather than one in which leaders of certain countries meet for photo ops and empty words.