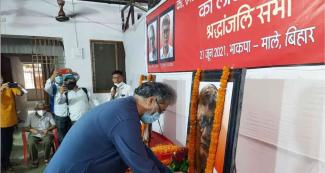 With the passing of Comrades Ramjatan Sharma and Arvind Singh, we have lost two of our finest comrades who had begun their communist journey in the tumultuous 1970s. Comrade Ram Jatan Sharma gave up his government job to join the movement as a full-time organiser in the mid-1970s after his younger brother Comrade Suresh (Siddheshwar Sharma), who had joined the CPI(ML) as a college student, had died a martyr in the Bhagalpur jailbreak campaign on 4 May 1976. Comrade Arvind Singh joined the CPI(ML) during his student days in Patna University during the Emergency and while choosing teaching as a profession, he remained a committed Party activist all through his life.

Bihar in the late 1970s was the ground where the CPI(ML) resurrected itself after the initial setback suffered earlier in the decade. The party central committee had been reorganised under the leadership of Comrade Jahar (Subrata Dutt) on the second martyrdom anniversary of Comrade Charu Mazumdar. Even as Comrade Jahar fell to the military might of the Indian state in a Bhojpur village on 29 November 1975, the party suffered no disruption and went on to hold its Second Congress in Gaya under the leadership of Comrade Vinod Mishra. If the state thought it had the last word in repression, the revolutionary movement knew how to overcome it with exemplary resilience.

The latter half of the 1970s were to prove a turning point for the CPI(ML). Patna had been the epicentre of the 1974 movement which, after the spring thunder of Naxalbari, was arguably the second biggest post-Independence youth uprising. While the youth movement raged on the streets of Patna, the rebellion of the oppressed rural poor grew in rural Patna and the adjoining districts of Shahabad and Magadh. It was a matter of time till the two met and understood each other. The Emergency era jails provided a vantage meeting ground and the euphoria of the 1977 ouster of the Congress and the disillusionment with the short-lived Janata party created the right ambience for this conversation.

CPI(ML) did not remain a silent spectator to this changing political environment, it reenergised itself by drawing a lot of inspiration and also necessary lessons from the 1974 movement and the electoral upsurge of 1977. Significant changes started taking shape in the party’s tactical approach, mass work, mass struggles and mass organisations assumed a new urgency and vitality in the party’s ideas and practice. Following the 1979 special convention of the organisation, the party’s mass outreach began to grow through diverse avenues and the organisation too began to acquire a growing all-India character amidst a vibrant churning of ideas, blossoming of initiatives, systematisation of everyday activities and regularisation of organisational life.

In their own ways Comrades Ramjatanji and Arvindji were typical representatives and organisers of this churning and expansion of the CPI(ML) in the post-1979 era. Comrade Ramjatanji, known as Aalokji to comrades in Patna would go on to play a key role in recruiting and developing comrades from among student activists in Patna University and Comrade Arvindji would play an anchor role in managing the party’s entry into arena of Hindi publication, as a member of the core team that launched the popular weekly journal Janmat. Aalokji would become Varmaji and take up the responsibility of party secretary in Uttar Pradesh before returning to Bihar via Chhattisgarh and Jharkhand and guide the Bihar party first as state secretary and then as in-charge of the Magadh region. From 2013 to 2018, Comrade Ramjatanji was the chairperson of the Party’s central discipline commission, and in 2018 Comrade Arvindji was also elected a member of this apex disciplinary body.

Comrade Ramjatan Sharma took keen interest in the dissemination of Marxist ideas and holding Marxist study classes involving young comrades. To sustain and consolidate the party’s continuing mass expansion, a communist party needs an ideologically motivated and equipped contingent of party cadre, and Ramjatanji would always concentrate on this often neglected aspect of the communist movement. Across generations there are many party cadres, including leading women comrades, who remember Comrade Ramjatanji for his close attention to cadre development and party education. In recent times he had also energetically taken to the use of digital technology and social media to carry on his role as a Marxist educator and motivator in these pandemic period when normal modes of communication and meetings have been hugely disrupted.

As we bid goodbye to these Party veterans we must try and imbibe their exemplary qualities of communist organisers – their tireless activism, hope and reliance on the people, and unflinching devotion to the revolutionary communist mission in our own lives.