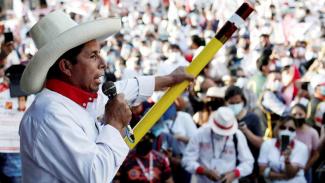 The recent elections in the Latin American country of Peru witnessed a historic mandate for the revival of the Left and against the right-wing neoliberal forces and the Washington Consensus.

Pedro Castillo, a rural school teacher and a union leader was elected as the president of Peru in the recently held presidential elections. Castillo secured 50.137% of the vote polled (8.83 million votes) while his opponent Keiko Fujimori secured 49.893% (8.78 million votes) according to the final result declared by Peruvian Electoral Authorial (ONPE). While in terms of figures, Castillo may have secured less than 1% lead over Fujimori, but the mandate is historic not only for Peru but for the entire region of Latin America. Firstly, it is the second time history of Peru, that a President has been elected from the rural and indigenous population. Unlike any previous governments in Peru, Castillo comes from a marginalized social base with direct connection to the masses. Second, the mandate is a strong rejection of right-wing politics spearheaded by Keiko Fujimori, daughter of Alberto Fujimori. And finally, the current mandate against the neoliberal project and Washington consensus provides an opportunity for revival of Left in Peru.

Castillo comes from Tacabamba District in province of Cajamarca, a country side in Peru. He has earlier led the successful two month long teachers’ strike in 2017 demanding increase in salaries, social debt relief, repealing of the Law of Public Teacher Career and an increase in education budget. The massive strike forced the then President Pedro Pablo Kuczynski, who initially refused to negotiate with the striking teachers to finally come to an agreement.

Castillo’s candidature for presidency against the right-wing and authoritarian ‘Fujimorism’, represented by Keiko Fujimori, and various social mobilizations exposing the perils of neoliberal policies, altered the course of election with uniting the poor, working class and liberal-democratic sections. On the other hand, Keiko Fujimori continued to push ant-communist rhetoric and invoking her father’s ‘strong government.’

Peru witnessed one of darkest period in its recent history under the rule of Alberto Fujimori in 1990s. Backed by the United States, Fujimori went on a brutal campaign against left wing students, peasant and worker activists, and indigenous leaders, while aggressively pursuing full scale neoliberal and austerity policies (known as Fujishock). These neoliberal policies were part of the Washington Consensus, a ‘reform package’ violently promoted by International Monetary Fund (IMF), World Bank (WB) and the United States’ government Treasury Department for Latin American countries.

In 2009, Alberto Fujimori was convicted for crimes against humanity and massacres organized by his death squads, Grupo Colina. He is also on trial for the forced sterilization of over 270,000 women and 22,000 men conducted during his regime.

While the governments that came after Alberto Fujimori in theory condemned ‘Fujimorism’, all followed the similar neoliberal agenda. Amid the COVID-19 pandemic, social inequality in Peru has risen steadily, with poverty rate reaching 30 per cent. As of 2020, 26 per cent of Peru's urban population is poor and in among the rural population the figures are at 46 per cent. Two million Peruvians have lost their jobs during the pandemic, according to official figures. The neoliberal model in Peru has destroyed the county’s public healthcare system with most poor having no proper access to healthcare. Currently, Peru has the world's highest COVID-19 death toll per capita.

Castillo and his party Peru Libre, with their slogan – No More Poor in A Rich Country – has promised to put an end to neoliberal policies the previous governments has pursed in collusion with the government of United States and International Monetary Fund (IMF). Peru Libre founded in 2016 relatively new left wing political party in Peru’s political landscape that take a socialist, Mariáteguism and anti-imperialist approach. Mariáteguism is the political ideology in Peru based on the works of José Carlos Mariátegui, a prominent Peruvian communist, journalist and author of influential work Seven Interpretive Essays on Peruvian Reality (1928).

Peru Libre emphasized on social conditions, issues of land reforms and focus on rural population for the elections. It also called for nationalization of corporate industry, especially the destructive mining industries, which has for a long period enjoyed complete impunity to plunder. However, Castillo has noted in his election campaigning that he does not aim to takeover over corporate industries, rather would re-negotiate the existing contacts with them to channel more revenues from these industries for domestic social program. The election manifesto also calls for a second land reforms drive focusing on agro-export land concentration, and supporting community and family agricultural production.

Peru Libre also calls for changing the current constitution, which came into force during the regime of Alberto Fujimori in 1993 and is entrenched wit deep neoliberal character.  The party also for closure of US military base in Peru, which remains as a reminder of the US support to the acts of crimes against humanity committed during Fujimori’s regime.

Castillo’s policies can be considered to be most progressive compared to any left-wing government that came to power recent history of Peru. His support comes from the interior and rural provinces, particularly in the Andean regions where the population lives in poverty. The rampant expansion of agro-export and copper-lithium mining industries have destroyed land and led to concentration of wealth in the hands of few. Castillo’s call to change these social relations led to him securing historic victory in 16 of the rural states.

The current mandate of the Peruvian presidential elections provides a historic opportunity to take Peru on to the path envisioned by José Carlos Mariátegui and put a brake to disastrous neoliberal project. But this historic mandate comes with major challenges ahead. One of the biggest questions is how far Castillo and his party are ready to go to fulfill the promises. There have also been concerns about Castillo’s social conservative approaches especially on the issues of abortion and same sex marriages and LGBTQ+ rights, even though Peru Libre’s election manifesto calls for legalization of abortion in the country.

Another challenge lies at the doorstep of Castillo’s electoral partner, Verónika Mendoza’s Nuevo Perú and its important to see how will Castillo take forward Peru Libre’s radical policies negotiating with Mendoza. Castillo, whose party has 37 seats in the Congress, also would have to form a united progressive block together with other left-wing parties in the Congress to take forward it’s policies.

As in every country in Latin America where people decide to stand up against US imperialist design, there are on-going attempts to destabilize the election victory of Castillo. The fears of a possible coup are unfolding as Keiko Fujimori have refused to accept the results and filed series of lawsuit challenging it. Some of the retired military generals, most of whom served under Alberto Fujimori’s regime have called upon the current ranks of Peruvian military to coup against Castillo’s victory. The current allegation of ‘electoral fraud’ put forwarded by Keiko Fujimaro brings back the memories of November 2019 coup in Bolivia toppling the people’s mandate that elected Evo Morales as the President.

The people of Peru are determined to stop any toppling of this historic mandate. Hundreds of thousands of people continue to mobilize in the capital city of Lima and other places across Peru in defence of their vote against right-wing hooliganism and the neoliberal project.