Adivasis’ Movement in Bastar Against Paramilitary Camps and Killings Continues 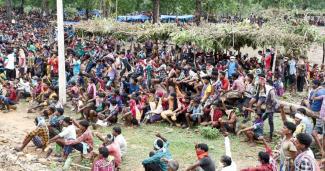 Since May 12, in Silger village in Chhattisgarh’s Sukma district, thousands of Adivasi locals were protesting against the newly built CRPF camp in what was previously a jungle on the border of Bijapur and Sukma districts. But on May 17, state forces (police and paramilitary CRPF) openly fired at the Adivasi protestors at the campsite leading to the death of three people. A pregnant woman succumbed to her injuries five days later.

Since then the protest has continued unabated for more than a month. Protests against construction of CRPF camps are not new in Bastar. Since October 2020, there have been at least 12 such protests in southern Chhattisgarh. CRPF camps are usually set up to protect road construction projects, which the State claims are necessary for “development”. But for the local adivasis, it is clear that “development” is code for corporate plunder of natural resources – in particular, the roads are needed by mining corporations to transport minerals they extract from the forest land they destroy. Roads are also used to facilitate the movement of paramilitary forces, who in the name of suppressing the armed Maoist insurgents, unleash daily violence and fear against unarmed civilian villagers. Arbitrary detentions, arrests, torture, killings and rapes by the forces, as well as daily harassment including stop-and-search operations at every camp and check-post are common. (See Bastar: Where The Constitution Stands Suspended, Liberation July 2016)

The CRPF camps are set up without the consent of the village bodies (gram sabhas), in violation of the Panchayat (Scheduled Areas) Act (PESA). Section 4 (i) of the Provisions of the Panchayat (Scheduled Areas) Act mandates that the gram sabha or panchayat must be consulted “before making the acquisition of land in the Scheduled Areas for development projects and before re-settling or rehabilitating persons affected by such projects in Scheduled Areas”. Chhattisgarh, along with Odisha, Jharkhand and Madhya Pradesh, in spite of being states with substantial adivasi populations, is yet to frame the rules needed to implement PESA, which was passed in 1996. The Congress came to power in Chhattisgarh in 2018 on a promise to fully implement PESA, especially in Scheduled V and Adivasi areas. But two and a half years have passed and this is yet to happen; instead the old story of setting up CRPF camps on adivasi land by force continues.

Rape and Murder Disguised as “Encounter”

On 30 May, an adivasi girl, 18-year-old Payke Veko was picked up by District Reserve Guards (DRG) personnel from her home in Nelsanar, Bijapur district, Chhattisgarh. Her family members tried to follow but could not keep up with the DRG vehicle. Later they were told that police had been seen carrying something wrapped in plastic. Suspecting the worst, they went to the police station – to find the body of their daughter, with torture and mutilation marks on her breasts, thighs and fingers. The police claim that Payke was a “Maoist” insurgent, killed in an “encounter”, while her family members allege rape and murder.

This is not the first incident of rape and/or murder of an adivasi woman in Bastar being passed off by Chhattisgarh police and paramilitary forces as an “encounter”. In 2011, teenager Meena Khalko was gangraped and murdered by Chhattisgarh policemen, who then claimed she was a Maoist killed in an encounter. A judicial enquiry established later that she had been raped and killed by the police – but her killers have yet to be brought to trial. The AIPF report on Bastar (Liberation July 2016) tells of Pandi, a young woman who like Payke was picked up by police from her home with her husband. Pandi’s mother followed the police for some time, but could not keep up. Pandi and her husband were shot dead in cold blood, and Pandi’s corpse was dressed up in Maoist “uniform”. But their injuries told of torture which did not support the claim of an “encounter”. Moreover the police had claimed that the encounter had taken place with a battalion of Maoists – and it is impossible that among such a large number, the two persons killed by the police would be husband and wife!

The AIPF report also documented the killings of two little girls Vanjam Shanti and Siriyam Pojje, aged 12-13, who were killed by the police in cold blood. The police falsely claimed later that they were part of a “Maoist squad” and were killed in an encounter.

We may recall that an October 2015 NHRC report had found that 16 women were “prima facie victims of rape, sexual and physical assault by state police personnel in Chhattisgarh” in Bijapur district - the same Bijapur where Payke was raped and killed.

The most remarkable and encouraging aspect of the Silger movement is the emergence of a team of young adivasi men and women who have represented the movement in talks with the government, MLAs and MPs.

On June 3 the Silger movement put together a 10-member team of adivasi youth between 17-25 years of age (who had a schooling and spoke Hindi fluently in addition to their own adivasi mother tongues) from different villages in Sukma, Bijapur and Dantewada. This team along with the teacher and activist Soni Sori (survivor of custodial rape by the state forces) met a government delegation comprising 8 MLAs and the Bastar Lok Sabha MP, all from the ruling Congress party, as well as the district collectors and police superintendents of both Bijapur and Sukma, as well as Bastar Inspector General of Police.

The team insisted on holding the talks in the open in the presence of the protestors. On behalf of the protestors they demanded dislodgement of the CRPF camp, suspension of police personnel who fired at the protestors, an inquiry by a retired Supreme Court judge into the firing, instructions to the police to leave a memorial built for those who died in May untouched, a guarantee that no protestor would be harassed by the police or administration, that no further camps should be established without holding a gram sabha meeting, and that a committee representing all seven districts of Bastar division would be formed which must be consulted before any security camp is set up. Talks failed because the government did not agree to removing the illegally set up camp, or to give the other assurances in writing.