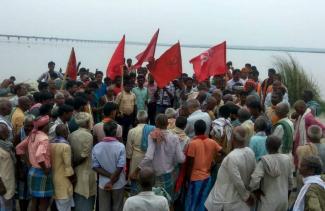 Dedicated first generation leader of the Naxalbari movement in Bhagalpur District and CPIML Kharik Block Committee member Comrade Lakhanlal Mandal (65 years) passed away at his home in Lokmanpur (Kharik) at about 7 pm on 15 August 2019. He was active in the Party from the latter half of the 70s till his demise. Born in a poor farmer’s family Comrade Lakhanlal played a leading role in the anti-feudal struggles and land rights struggles in the Kadva region. He was always dedicated and true to the Party and the interests of the poor and the oppressed. He is survived by his wife, two sons and three daughters. A wave of grief engulfed the entire Party cadres when news of his demise reached them.