PROTESTS broke out all over India against the Modi Government coup which dissolved the state of Jammu and Kashmir and abrogated Article 370 of the Indian Constitution.

In Delhi, within hours of Amit Shah’s announcement of the draconian move, hundreds of protesters gathered at Parliament Street, in response to a protest called by Left parties. Protestors including a large number of students, held up protest banners, saying, “Stop making Kashmir into a prison,” “Restore Articles 370 and 35A!”, “Release all opposition leaders in Kashmir!”, “Do not play with Kashmir and the Constitution!” And “We Stand With The People of Jammu And Kashmir.”

In Patna, a protest organised by CPIML, AISA and AIPWA at Kargil Chowk was attacked by some far-right goons calling themselves the “Rudra Chandi Sena” who raised slogans of “Godse Zindabad” in support of Gandhiji’s assassin, and were clearly trained in wielding lathis and other weapons. The protestors however stood their ground and offered a spirited resistance, giving the goons a taste of their own medicine and forcing them to beat a hasty retreat.

A protest by Left parties was held in Siliguri as well, which CPIML joined in good numbers. In Puducherry, CPIML held a protest which was addressed by the party Secretary Comrade Balasubramanian. In Gurdaspur, Punjab, also, the party held a protest meeting which was attended by hundreds of people. 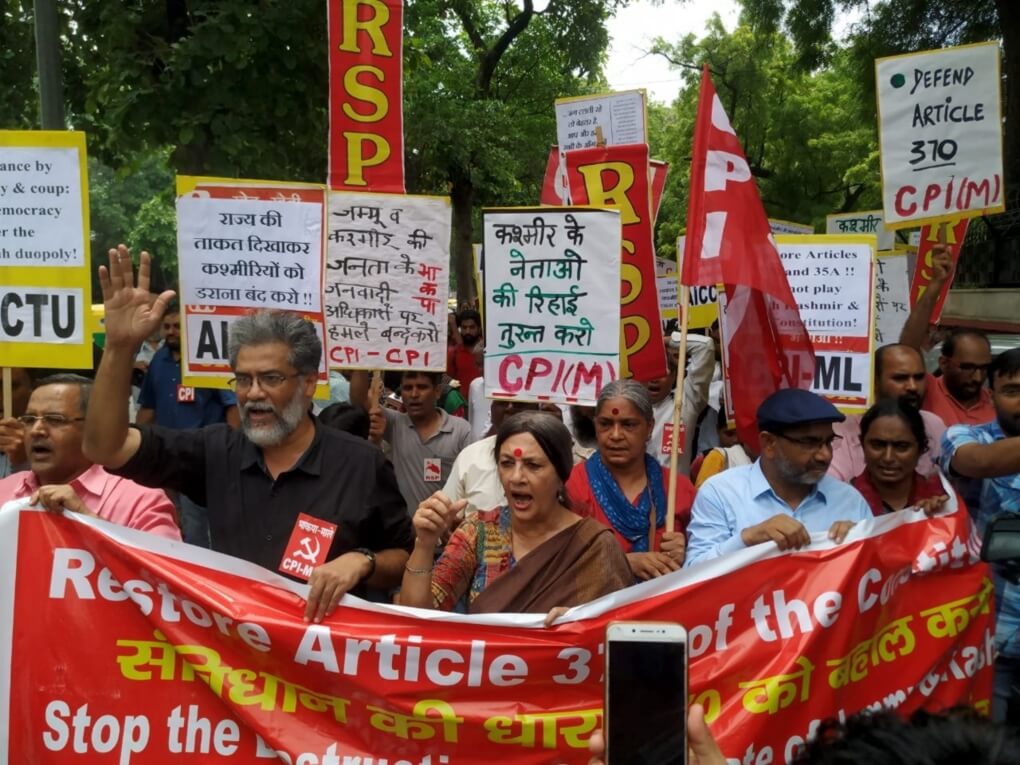 On 7 August, Left parties held protests all over the country. In Delhi, CPIML GS Dipankar Bhattacharya, CPIM GS Sitaram Yechury, CPI GS D Raja, as well as Left leaders Brinda Karat, Annie Raja, Kavita Krishnan, Purushottam Sharma and others led the rally from Mandi House to Parliament Street. Joint Left protests took place in Guwahati, Chandigarh, and Bhubaneshwar. Protests were held in Jaipur, Udaipur, Jhunjhunu and other districts of Rajasthan. In Jaipur, RSS cadres protected by the police attacked the protesters but protestors stood their ground and forced them back.

In Tirunelveli (TN) lawyers led by CPIML State Committee member G Ramesh held a protest march. CPIML held protests in other parts of TN also, defying the police and administration which denied permission for the protests all over the state. In Vizhupuram, protesting CPIML activists were detained by the police.