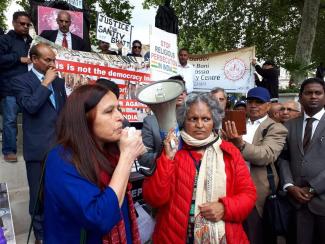 NEARLY a thousand people from different parts of the UK attended a vigil and protest against fascism in India titled ‘This is not the democracy India fought for’ at Parliament Square, London, on 18 August.

Seven organisations representing the significant Dalit community in the UK joined hands with South Asia Solidarity Group to organise the protest, which highlighted anger in the Indian diaspora about the Narendra Modi government’s illegal abrogation of Articles 370 and 35A and the ongoing blockade, mass arrests and human rights violations in Kashmir, the state-sponsored epidemic of mob lynchings of minorities, the escalating persecution of Dalits, including the recent demolition of the Guru Ravidass temple in Delhi, the protection and promotion of BJP leaders and associates who are rapists, the mass detentions and threatened deportations under the NRC, the silencing of all forms of dissent, and the draconian amendments to the UAPA.

Among the speakers who addressed the protest were Tim Dawson (Convenor, International Federation of Journalists, Taranjit Chana (GMB union), Kashmiri students, Akashi Bhatt, daughter of imprisoned whistleblower and former police officer Sanjiv Bhatt, and representatives of the Labour Party, as well as speakers from the organising groups South Asia Solidarity Group, CasteWatch UK, and Together 4 Good.

Nirmala Rajasingam of South Asia Solidarity Group said: ‘The overseas wings of the BJP and RSS are seeking to whip up Islamophobia and intensify Caste discrimination in the Indian communities in this country while at the same time, fundraising for Hindu supremacist violence, glorifying Modi and spreading fake news about his achievements. They have the support of the Conservative Party and have managed to scupper a law banning caste discrimination which had been passed by the previous Labour government. The struggle against them has become more intense with the possibility of Brexit looming and Britain looking to India for trade deals. The recent appointment of Priti Patel, a supporter of the RSS and an ardent admirer of Narendra Modi as UK Home Secretary has further strengthened the forces of Hindu-supremacist fascism in Britain.

Satpal Muman of CasteWatch UK, the biggest Dalit organisation in the UK, said: ‘We are outraged and shocked by the events unfolding in India today. The BJP regime has unleashed a tyranny of the majority in the guise of Hindu Nationalism. This, however is not nationalism at all since it endangers the lives of citizens  of the nation. 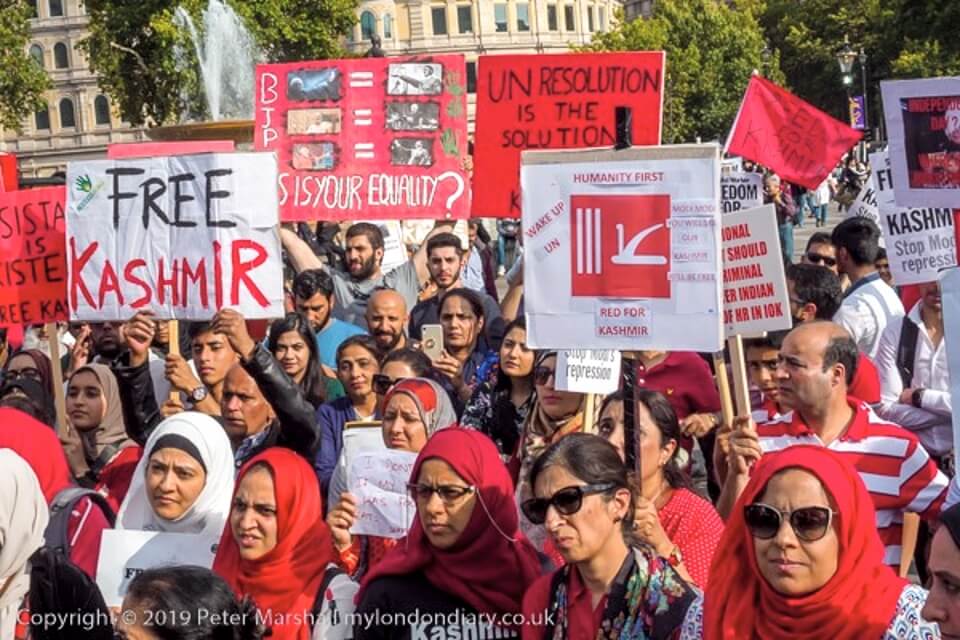 ‘We are also concerned that having abrogated Articles 370 and 35A 'because they  were temporary', reservations and other rights of Dalit communities will also be revoked since they are also being regarded by the RSS and its supporters as interim measures.

‘The fact that the  Ravidass Mandir in Tughlakabad in Delhi, a 15th century Mandir of deep spiritual significance to the Ravidassia community, was ruthlessly demolished  on 9th August by a local authority controlled by the BJP highlights for us the BJP's  anti-Dalit agenda of murder and rape and continuing marginalisation of Dalits. We are concerned that these violations of basic fundamental freedoms  and human rights and suppression of dissent are a slippery slope to dictatorship and a fascist state.’

A spokesperson for Together 4 Good, an organisation which investigates hate crimes, said, ‘In Gujarat and Delhi, two Muslim children, aged 15 and 18 respectively, are murdered - one for allegedly being involved in a theft, and the other for daring to fall in love with a Hindu girl. Another 15-year-old Muslim boy is set on fire in Uttar Pradesh but the police refuse to take action, claiming the incident is “suspicious”. In Bihar, four people - including two Sikhs - are brutally thrashed within an inch of their lives, on suspicion of being child abductors. Amidst a spate of similar incidents - 12 cases in a mere 15 days - state police is forced to launch a special awareness drive appealing for calm. A week later, a 35-year-old Mahadalit is beaten to death in the same state. In Rajasthan, all six accused are given the “benefit of the doubt” and acquitted by a local court in the lynching to death of Pehlu Khan (April 2017), an incident that was caught on video and sent shockwaves across the country and wider.

‘This is New India, where life for minorities often resembles scenes lifted straight out of a dystopian novel. The cancer of radical Hindutva continues to seep into all strata of society, across states but particularly in large BJP-ruled states like Uttar Pradesh and Gujarat.’