Skip to main content
SPECIAL REPORT 13 August 2019
Let Us Unite and Resist! We Shall Overcome!

A very warm welcome to you all at this mass convention. On behalf of the Central Committee of the CPI(ML) I salute you for making time to attend this Convention which binds us together with its clarion call 'Unite and Resist'. The end of July reminds us of some great names that are sources of enormous strength and inspiration in facing today's challenges. 28 July is the martyrdom day of Comrade Charu Mazumdar, this year we observed his 47th martyrdom anniversary. July 29 is the death anniversary of Ishwar Chandra Vidyasagar, one of the greatest pioneers of education who broke the boundaries of caste and gender to make education accessible to all way back in the 19th century. And 31 July is the birth anniversary of Premchand, one of the greatest Hindi writers of all time whose pen gave colonial India immense power in the twin struggles for national liberation and social emancipation.

This city of Kolkata has also got its unique place in the history of modern India. It is a city which has initiated and witnessed many great struggles and assemblies of the people. The stirrings of anti-colonial nationalism rocked the city at every step and turn of the freedom movement. After 1947, every major upsurge of the Indian people, every dissent against despotic attacks on democracy, every international outcry against imperialist interventions, wars and occupations in any part of the world has reverberated in Kolkata. We pay our tribute to the great thinkers, writers and social reformers, freedom fighters, communist leaders and countless martyrs of West Bengal who have shaped this glorious progressive history of Kolkata and Bengal.

Kolkata has also been hit by tragedies, the famine of the 1940s, the communal violence of the Partition days, the custodial deaths and massacres of the repressive Siddhartha Ray era, and now increasingly the vandalism of the Sangh Brigade. But Kolkata has never succumbed to these tragedies, the voice of protest and resistance has always echoed boldly and loudly. Today when fascist lynch mobs are raising their heads in West Bengal and the voices of protest are being sought to be harassed into silence, we have assembled here to say a loud no to this fascist onslaught. We are determined to strengthen our unity. And we are here to declare our resolve to fight and win. 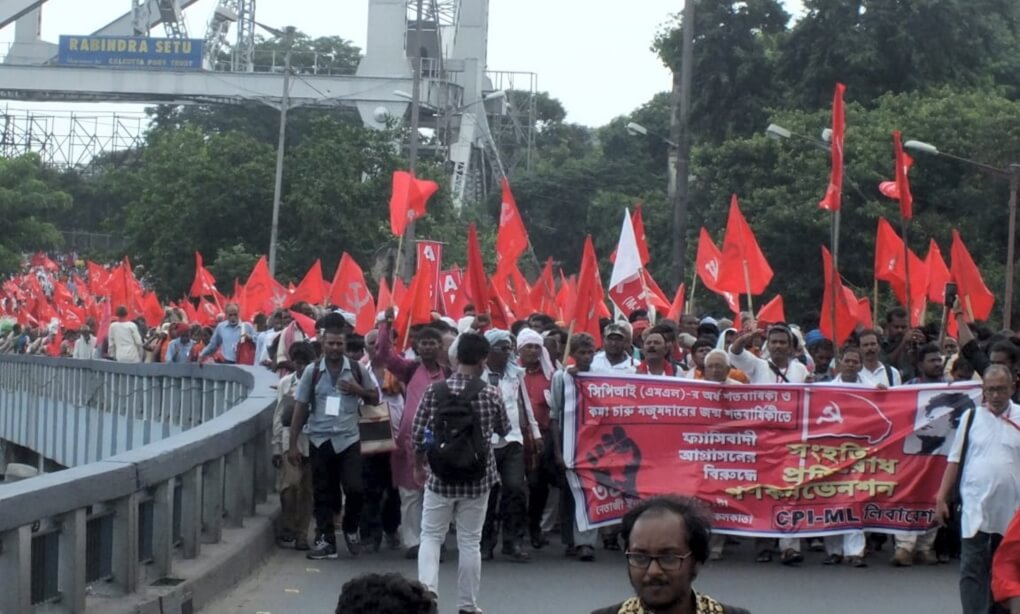 We have come here from all corners of India. We speak different languages. We follow different religions. We wear different clothes. We eat different food. This diversity is our collective identity and we are proud of it. We will never allow any organisation, howsoever big, or any government, howsoever powerful, to dictate us what language we should speak, what clothes we should wear, what food we must eat, what slogans we must chant. Our unity is rooted in this diversity and we will not allow anybody to bulldoze us into uniformity and homogeneity.

We respect our differences, we celebrate our diversity. The Sangh-BJP establishment wants to insult and distort our differences and turn them into walls of prejudice and hate, battle lines of fear and violence. We are equal as Indians despite our differences, in fact, our differences and diversity broaden our cultural canvas and deepen our unity as a people. The Modi government, on the contrary, is busy centralising all powers by constantly undermining the federal framework of our Republic. This aggressive centralisation is alienating large sections of Indians and weakening India, we therefore insist on immediate reversal of this trend to carry the Indian mosaic forward on the basis of our diversity, pluralism and federalism.

The rise of communalism during our freedom movement weakened our unity and eventually led to the partition of India. The only lesson India should take from this tragedy of history is not to repeat it, not to allow communalism to drive the country towards further division, but to strengthen secularism and harmony as the foundation of our unity and maturity as a democracy. Today the Sangh-BJP order is out to overturn the secular foundation of our Republic. We are determined to foil this destructive design.

This country belongs to all of us. The anthem of 1857 proclaimed this popular ownership in the clearest possible terms, 'Hum hain iske malik, Hindostan hamara' (we are the owners of this Hindostan of ours). The Constitution of India, drafted under the chairmanship of Dr. Ambedkar, declared us, 'we, the people of India' as the fountainhead of India's sovereignty. The Sangh-BJP order denies this basic spirit of equal ownership and wants to reduce minorities to second grade citizenship. With the NRC and Citizenship Amendment Bill, it wants to strip sections of Indian residents of their citizenship and entrap them in permanent prisons of fear and persecution. We have come here to reject this blueprint of division, there can be no religious test for Indian citizenship, there can be no detention camp for Indian residents, there can be no forcible deportation without any bilateral agreement with Bangladesh. 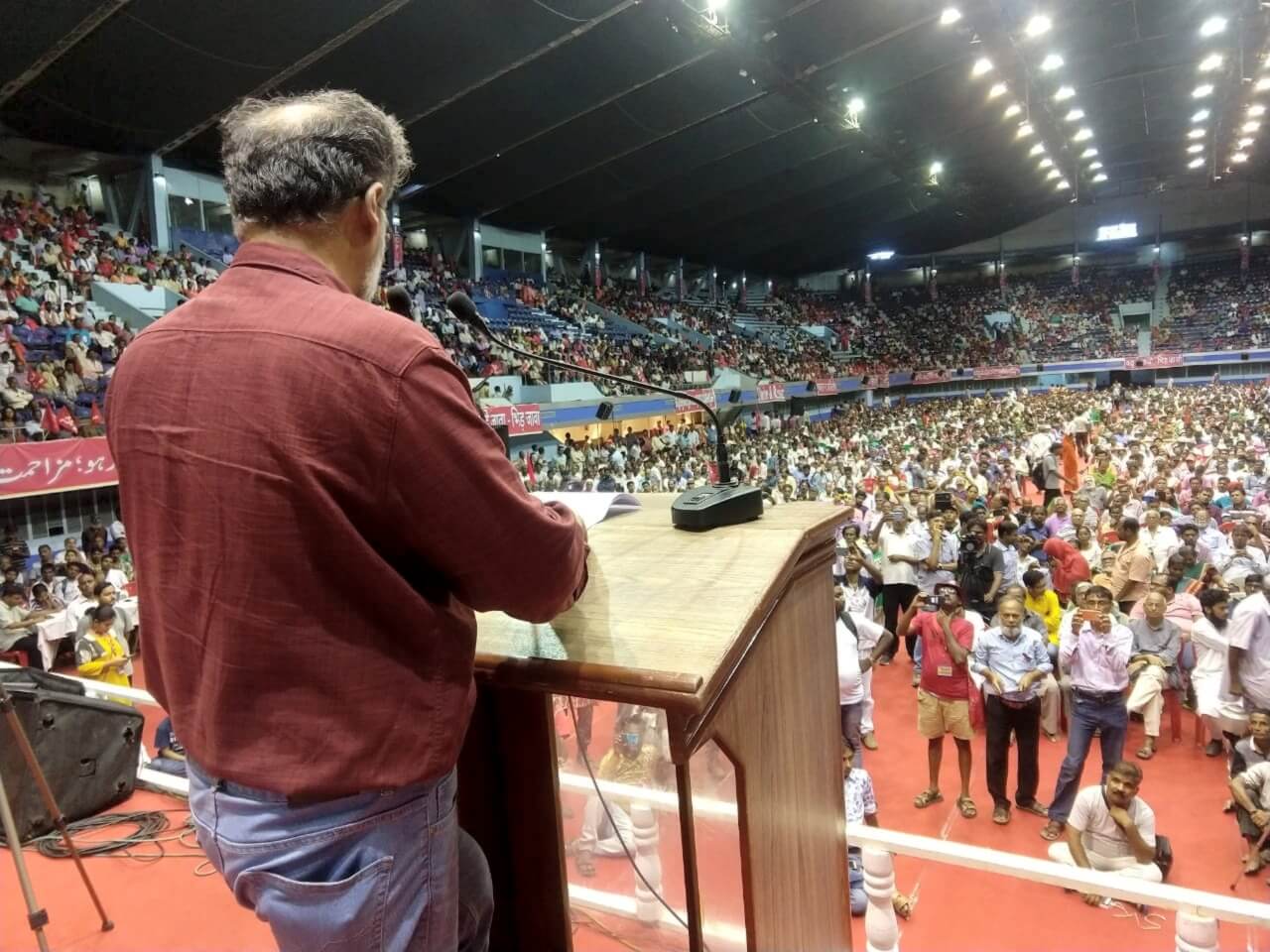 The Modi government wants to concentrate all our resources in the hands of the richest 1%, and deprive the poor of all their basic rights, food and shelter, education and healthcare, livelihood and social security. The more they talk of nationalism, the more they subject the nationalised economy and public sector units to disinvestment and privatisation. They want to rewrite our forest act to evict millions of Adivasis and forest-dwelling people from their ancestral land. If this government wants to mortgage India to the interests of the Adanis and Ambanis, the inheritors of Sidhu-Kanu and Birsa will defeat this design. We are here to reaffirm our song of resistance that has already become the anthem of the anti-eviction movement: jangal zameen chhodab nahi, ladai chhodab nahi (we won't leave the forests and land, we won't leave the struggle)

In a couple of weeks from now we will be observing the 72nd anniversary of our independence. The Modi government claims to have enhanced India's international standing, but today Trump says Modi has asked him to mediate and arbitrate between India and Pakistan. Our budget comes up with plans to borrow in dollars from private foreign lenders. America has the audacity to dictate our terms of international trade, tell us not to buy oil or gas from this or that country. This is nothing but a dangerous erosion of our hard won independence. The RSS has no roots in India's glorious and protracted history of our freedom movement, their history is a history of collaboration with the British rulers. Their hero is Savarkar who sought and obtained mercy from the British rulers to come out of jail, while we have Bhagat Singh and countless other martyrs who sacrificed their all for the liberation of our people who continue to guide and inspire us.

We cherish the great legacy of our freedom movement, and are determined to expand the frontiers of freedom. Freedom from imperialist bondage must be accompanied by freedom from all kinds of social slavery, oppression and discrimination. The solemn commitment of justice, liberty, equality and fraternity made by the Constitution to the Indian people cannot be mortgaged to khap panchayats and lynch mobs patronised by the state. Manusmriti and the patriarchal Brahminical framework may be the model social code for the Sangh parivar, but modern India will never go back in historv to the days of social slavery. The ideas of Phule, Ambedkar, Periyar and other crusaders for social equality and gender justice will continue to propel us forward towards a just and egalitarian order. As for the lynch mobs, we know they will disappear if the state upholds its constitutional responsibility of enforcing the rule of law. If the government reduces governance to institutionalised anarchy, we as conscious citizens will do everything possible to hold the government accountable for rule-based governance.

We want to live and advance as a free people, as citizens with inviolable rights - the Modi government on the contrary wants to rule by fear, repression and regimentation. The colonial legal architecture is being reinforced to restrict and subvert civil liberties and democratic rights, the infamous Rowlatt Act of 1919 has just been resurrected in the form of the UAPA Amendment Bill. We have any number of cases of people being acquitted after being jailed for years and decades on false terror charges, but the amended UAPA will now enable the state to treat citizens as terrorists and detain them without trial and judicial review. While the country is being bombarded with fake news and hate-filled propaganda, the people's right to demand information and insist on transparency and accountability has just been effectively buried. Democracy is our constitutional right and we are here to declare our resolve to defend this right with all our might.

In the 1970s West Bengal had suffered heavily under the infamous regime of  Siddharth Shankar Ray. But the spirit of democracy fought back resolutely. This valley of death is not my country, this euphoric celebration of the killers is not my country - declared the protesting voice of the 1970s. The restoration of democracy saw a remarkable rise of the Left, the two almost becoming synonymous. The welcome steps towards implementation of land reforms, barga rights and panchayat raj built a big stable base for the Left government in rural Bengal. In a quirk of history three decades later the very agenda of peasant rights and democracy led to the ouster of the Left Front government, but the TMC which came to power promising democracy has given Bengal instead a reign of terror, anarchy and corruption. And now the BJP wants to capture power in West Bengal precisely by unleashing a bigger campaign of terror mixed with heavy doses of communal venom and violence.

We are confident that the democracy-loving progressive people of West Bengal will forcefully intervene at this juncture to save West Bengal from being turned into a laboratory of communal hate and fascist terrov and vandalism. The Left forces of West Bengal already have the eye-opening example of Tripura and the rampage that has already begun in the state, not to mention the intensifying countrywide assault on democracy that we have been experiencing since 2014. 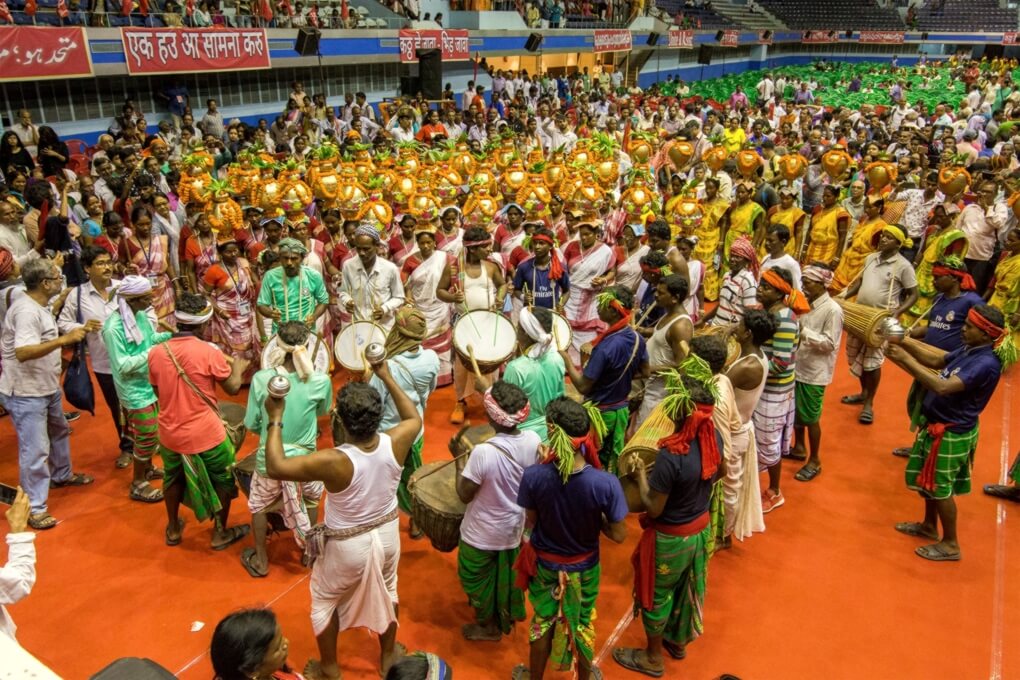 The CPI(ML) began its journey from this city of Kolkata, Comrade Charu Mazumdar was killed in police custody in this very city. Today our Party has turned 50 and we are observing the centenary of Comrade Charu Mazumdar's birth. From the platform of this historic mass convention in Kolkata we renew our pledge for a truly democratic, egalitarian and federal India and extend our sincere cooperation to the entire range of forces fighting for democracy, social justice and people's rights.

The opposition may be weak today inside the parliamentary arena where the government is bulldozing its way to pass new legislations without any parliamentary scrutiny, but we will make sure that out on the streets of India there will never be any dearth of opposition to challenge the fascist establishment at every step. Let us unite and resist with all our might. We shall overcome. 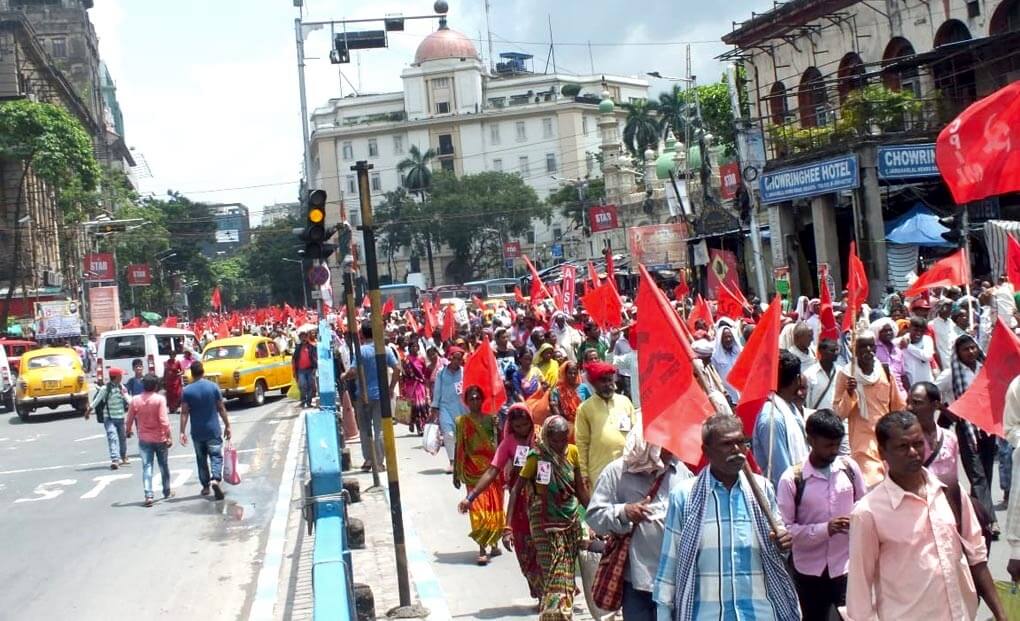