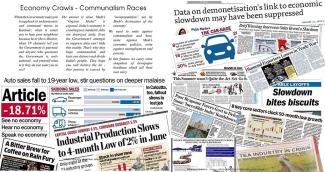 The answer is clear. Modi’s “Gujarat Model” is exposed. India’s economy is crawling to a standstill. Jobs are destroyed daily. Even the Government’s attempts to suppress data can’t hide this reality. That’s why they hope communalism and hate can distract and divide India’s people. They hope you will believe the lie - that poverty is caused by “overpopulation” not by Modi’s destruction of the economy.

In this feature, we carry some snapshots of newspaper headlines which tell their own story.