Forward with the People's Resistance Against Fascist Offensive!

Make the 10th Congress of the CPI(ML) A Great Success 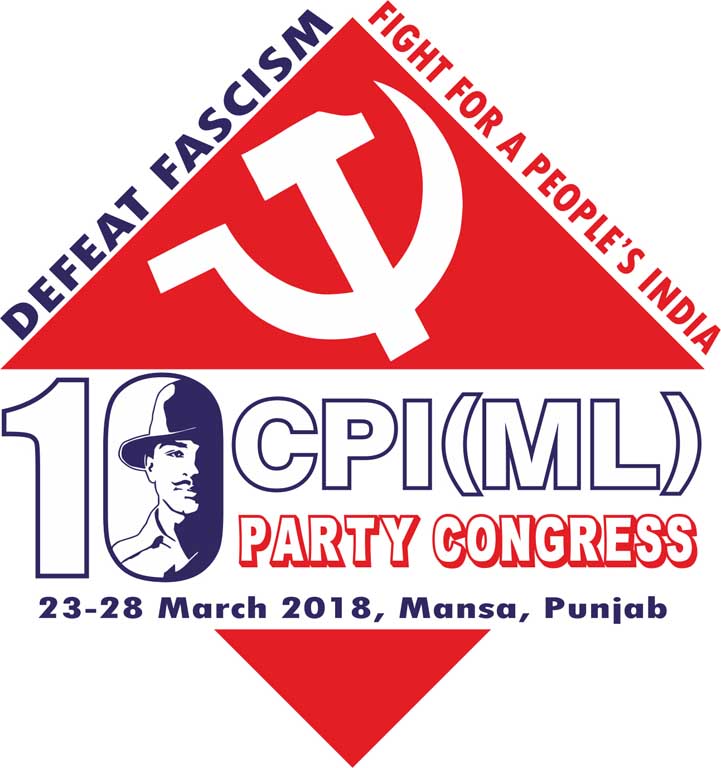 WE are now in the fourth year of the despotic Modi regime and with every passing day the regime is pushing the country into a deeper crisis. India has never had a government in the past that had unleashed this kind of a total war on the people. Through demonetization and GST, this government has caused enormous disruption and destruction of India’s small-scale economy, be it agriculture, small-scale manufacturing or trade. And now by linking Aadhaar to every welfare scheme meant for the poorer and vulnerable sections of the society, the government is taking away the last means of survival from many already deprived people and we have already witnessed a series of Aadhaar-linked starvation deaths. The banking sector is reeling under the burden of massive unpaid corporate loans, but in the name of saving the banks the government is busy diverting public money to bail the banks out, and now there is a proposal to allow banks to appropriate bank deposits and convert them into bank shares!

Accompanying this economic war is a growing campaign of unmitigated communal violence. Mob lynching and contract killing have become the order of the day. From Pehlu Khan to Junaid to Alimuddin Ansari to Mohammad Afrazul, every now and then we get reports of horrific murders of Muslims from some BJP-ruled state or the other. From Una to Saharanpur, Dalits are also faced with intensified atrocities, especially in the wake of the BJP’s massive UP victory and the anointment of Yogi Adityanath as the Chief Minister of UP. While the BJP governments grant impunity to the thugs and killers who lynch common people and kill writers and activists, they invoke draconian laws to suppress dissent. Peasant leader Akhil Gogoi of Assam and Dalit leader Chandrashekhar Azad ‘Ravan’ of UP are detained under NSA, student leaders are facing sedition charges while journalists are being sought to be silenced by slapping defamation suits.

But 2017 has also made it abundantly clear that the people of India are determined to resist this fascist onslaught of the Sangh brigade and the BJP governments. Across the country, we have seen sustained mobilisations of workers and peasants around their burning demands. Even as the Modi government delayed the normal schedule of the winter session of Parliament, workers and peasants from across the country reached Delhi and staged massive demonstrations. In university after university, students have rejected the ABVP, raising a powerful voice of protest against the government’s policy of curtailing educational opportunities, academic freedom and campus democracy and denying basic safety and rights for women students.

And in spite of the BJP’s stunning victory in UP amidst widespread allegations of EVM tampering and the blatant capitulation of large sections of the mainstream media, we continue to see signs of public anger in elections and the rise of an alternative media with investigative exposes of corruption and crony capitalism and courageous attempts to hold the governments and various institutions accountable. Regardless of the final outcome of the Gujarat elections, it has been clear that most sections of the people of Gujarat are fed up with the betrayal and non-performance of the BJP and the pro-corporate anti-people character of the much touted ‘Gujarat model’. The fact that the entire Modi government and chief ministers from all BJP-ruled states have been forced to camp in Gujarat and that the BJP’s poll campaign has been stripped of all its developmental rhetoric have exposed the vulnerability of the BJP and the Modi government. The unravelling of the so-called Gujarat model right in its birthplace has itself been a great gain for democracy.

2017 has also exposed the bankruptcy of the bourgeois opposition. In Bihar, Nitish Kumar betrayed the emphatic mandate he had secured from the people in the name of defeating the BJP by handing over power to the same BJP. In Gujarat, even as basic economic issues have come to the forefront and the Congress is clearly getting a good response from the peasantry, traders and youth on issues of agrarian distress, GST and unemployment, Rahul Gandhi is trying to compete with the BJP on the terrain of soft Hindutva by visiting temples and projecting himself as a sacred thread wearing Shiva-worshipping Brahmin. This has made it easier for the BJP to raise the Ram Mandir issue as a key point of electoral discourse in the Gujarat elections. Ironically, this was precisely the path traversed by Rajiv Gandhi three decades ago when rattled with corruption charges and the backlash triggered by his government’s capitulation to the Muslim orthodoxy on the Shah Bano verdict of the Supreme Court, his government had shelved its 21st century India rhetoric to open the floodgates of the Ram Janambhoomi campaign leading to the spectacular rise of the BJP.

Strengthening of the communist movement and other progressive democratic trends alone can create the ideological-political foundation for an effective resistance against the fascist forces. This is the legacy of Comrade VM which we must boldly uphold at this crucial juncture of Indian politics. The forthcoming 10th Congress of the Party will be dedicated to the agenda of defeating fascism and strengthening the battle for a genuinely democratic India. On the 19th anniversary of Comrade VM’s demise, let us resolve to make our best possible efforts for the success of the 10th Congress so the CPI(ML) can emerge stronger and play its due role at this decisive hour of Indian history.