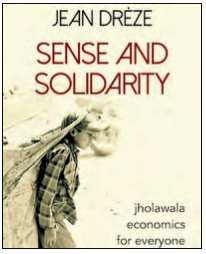 Jean Drèze’s Sense and Solidarity: Jholawala Economics for Everyone is a collection of essays on various aspects of ‘social development’ in the Indian context and the role of action-oriented research in the same. As its title suggest, it makes a passionate and well-reasoned case for a 'jholawala' – humanitarian – approach to economics. Activists in India are mocked in the media as 'jholawalas' ('jhola' is a cloth side bag), and Drèze asks why carrying a briefcase should be seen as more acceptable and deserving of respect than carrying a jhola. In the context of social development, he looks at various qualitative indicators of child health, elementary education and gender equality and broadens the same to include aspects such as the abolition of caste, the progress of ethics and social norms among others.

The book looks to understand these various parameters of social development through the lens of the various welfare schemes that were developed by the Government from the PDS to the mid-day meal schemes to the more recent NREGA. He traces the journey of these schemes from the various efforts made by successive governments in the provision of these schemes, some of which have now become laws, to the important role played by them in ensuring some basic rights to the poor, the problems of corruption plaguing them and efforts being made to either dismantle them or privatise them. From the attempts to dismantle the Public Distribution Scheme to reducing the fund allocation to NREGA or the ridiculous attempt to substitute hot cooked mid-day meals with Parle-G biscuits, he looks at the present attempts to break this welfare state.

The book also takes on the critiques of such social spending, and the ludicrousness of the argument against what they call ‘non-merit subsidies’ comparing the minimal amount of social spending to the (truly non-merit) large-scale write-offs made to the corporate sector. He points to the total of a mere 1.7% of the GDP being spent on social support, viewing India as being ‘among the world champion of social under-spending’. The fallacy of such an argument has also been brought out by P Sainath who pointed out that between 2005 and 2014, the total amount of revenue forgone under corporate income tax is well over Rs. 36.5 lakh crore, which could have been used to fund the MGNREGA for around 105 years or the Public Distribution System for 31 years. Even as we speak, such social spending is only decreasing, and added to it is an increased stress on private-sector participation in social programmes.

While the dismantling of the welfare state is certainly a reality that we are being confronted with, it is also essential to look into the notion of the welfare state itself, and its inherent failure to confront the social structures that allow for inequalities to not only exist, but to perpetuate. The World Inequality Report, 2018 which was released last week found that in 2014, the share of national income captured by India's top 1% of earners was 22%, share of top 10% of earners was around 56% and the top 0.1% of earners has continued to capture more growth than all those in the bottom 50% combined, who have only about 15% share in the total income. The report also finds that this inequality has risen substantially from the 1980s onwards, tracing its source to the implementation of deregulation and opening-up reforms. As can be seen there has been a steep rise in real inequalities.

The book, in the section on the public distribution system, speaka of the manner in which the Chhattisgarh Government managed to turn-around the PDS system and fix a dysfunctional system. At the same time, it recognizes the political calculations of the same and the government's contempt for people's rights. This is perhaps the starkest evidence of the limited nature of the welfare state. While the Government provided for expanded PDS coverage and a less corrupt PDS system, it has also imposed, in the words of the Supreme Court in the Salwa Judum case, an “amoral political economy” and a culture of unrestrained selfishness and greed spawned by modern neo-liberal economic ideology. The act of the Government that provided 35kg of rice a month for Rs. 1/- cannot be seen in isolation when the same Government has unleashed a “development paradigm” which has reduced the communities to a sub-human existence not merely on account of pre-existing conditions of material deprivation, but by the systemic denial by the forces and mechanisms of the developmental paradigm unleashed by the State.

While the important role of the Welfare state in ensuring some level of life and dignity cannot be in any manner disputed, the welfare state at best does what Engels in The Wages System speaks of as the most unfair division of the worker’s produce, where the worker receives in return for her full day’s working power, just as much, and no more of the necessities of life as is required to keep up the repetition of the same bargain every day. The welfare schemes at their best, attempt the same – to ensure that a person does not die of starvation. This is also evident where the Government in the implementation of the NREGA refused to pay workers the notified minimum wages, which itself is nothing but starvation wages, but instead sought to pay them much lower wages that were to be specifically notified for NREGA.

The inequitable nature of growth in fact finds a metaphor (and a reality) in the Indian Railways in Drèze’s essay of the Bullet Train Syndrome. While for the privileged travellers, there have been major improvements, the person who travels without reservation is exactly where she was 35 years ago. Even the punctuality of the expensive priority trains are at the cost of delaying other trains.

The existing state looks at its role in social development as being limited to the dispensing of 'doles' in order to ensure that people don't die of starvation. Such a limited role fails to meet even the most fundamental of duties laid out in the Constitution for the State. The directive principles of state policy mandates that the state is to strive to minimise the inequalities in income and the elimination of inequalities in status, facilities and opportunities, not only amongst individuals but also amongst groups of people. The State is required to direct its policy towards securing that the operation of the economic system does not result in the concentration of wealth and means of production to the common detriment and that resources are used for the common good.

The battle then cannot be merely towards ensuring that the basic welfare measures are maintained, but for real equality, where existing inequities are dealt with. The present welfare state that treats people as subjects to be patronized is required to be changed to recognition them as citizens with a right to an equal share over resources and all opportunities.

Sense and Solidarity is a useful read for anyone – not just economists – wishing to challenge the 'common sense' economic rationale promoted by the mainstream media and economists who work for the Governments and the World Bank.