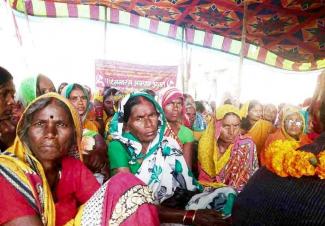 Communal tension has been prevailing since 2 December in Phulwari Sharif close to the capital Patna. On 2 December 150 people from the Muslim community from Gonpura were going to the Ishopur dargah to offer a ‘chaadar’ on the occasion of Prophet Mohammed’s birthday. They were attacked by Bajrang Dal Block President Uday Yadav’s son Sanjeev Yadav and his group who poured petrol and set the ‘chaadar’ ablaze. They also fired shots seriously injuring 2 people from the minority community. After setting the fire at Phulwari the rioters split into smaller groups and started spreading frenzy and terror in nearby villages. They burnt down 10 houses of Muslims at Lahiyarchak in Gonpura. They also attacked Muslim houses in Nihura and tried to spread terror in the entire area.

On 3 December Left parties tried to hold a Peace March against the spread of communal poison but the administration put a ban on the march and appeared in no mood to arrest the rioters. The tense situation still prevails in the area and the minority community lives in fear. At a joint left parties’ convention held on 6 December, a resolution was passed that strongly condemned the Nitish government’s policy of surrender to and collusion with communal forces. It was also pointed out that the Nitish administration, while banning Peace Marches on the occasion of the Babri Masjid demolition anniversary, was allowing armed ‘Shaurya Diwas Yatras’ (Valor Day processions) by the Bajrang Dal which had already indulged in open communal violence in Phulwari!

Hundreds of activists and supporters came out on the streets for the Bhagalpur bandh called by the CPI(ML) on 30 November 2017 against the brutal killing of dalits at Jhandapur in Bihpur, Bhagalpur district. About 10 houses in Jhandapur Basti belong to Ravidas families. The current atmosphere in the village is so terror-filled that nobody is willing to say anything. On the morning of 26 November 3 out of the 4 members of the family of Gayatri Das were found dead—the dead were Gayatri Das, his wife Meena Devi and 12 year old son Chhotu Kumar. The heads of all the dead were badly crushed and streams of blood were flowing on the floor. There were injury marks on many parts of the bodies. The 17 year old daughter of Gayatri Das was found fully nude and in an unconscious state with several injuries on her body. The private parts of Gayatri Das and his son had been cut off. There were injury marks on the private parts of the women also. Party leaders met with and spoke to the victims and their families at Sadar Hospital.

Speaking at the meeting in Ambedkar Chowk, leaders pointed out to the people how crimes and violence by feudal dominant forces against women, dalits, children had increased during the Nitish-BJP government: burning of houses and beating of dalits in Rangra by criminals under protection of JD(U) Block President Bhola Mandal; attempts at rape and repression of dalits at Nathnagar; gang rape of a girl student by rich brats in Bhagalpur; murder of advocate Arjoo; brutal murder of 4 young players at Bihpur; these are only a few examples of the growing number of crimes under the present dispensation.

The Nitish Government is forcibly evicting the poor from Bhoodaan land in Champaran and is arguing that since the Land Reform Act had been passed, the land-owners had no right to give away their land in Bhoodaan. The irony is that Chief Minister Nitish Kumar started his ‘Sameeksha Yatra’ on 7 December from this very Champaran. 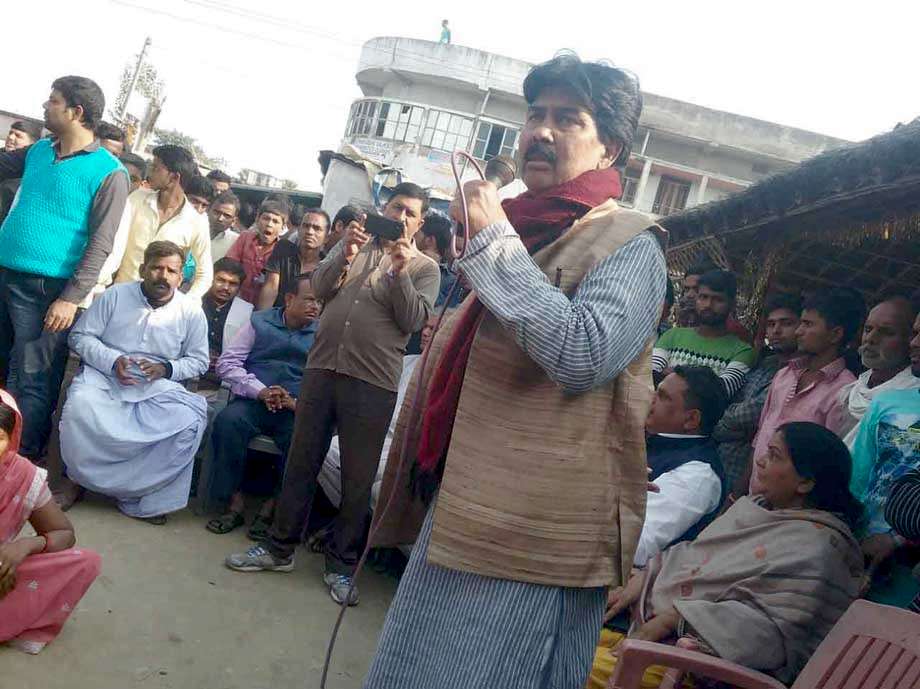 A State level CPI(ML) team visited Betia on 2 December. The team consisted of MLA Mahboob Alam, Virendra Prasad Gupta and Umesh Singh. The enquiry team visited the Dolbagh area in Betiya where 200 families have so far been evicted and their homes razed.

It is well-known that a big portion of the 3.5 lakh acres of land in Betiya Raj is in the clutches of real estate, sugar, and indigo tycoons. There is a long standing demand that these lands should be acquired and distributed among the poor. But the Nitish government is today doing the very reverse. They are evicting the poor even from the small portions of land on which the poor have been settled and are handing the land over to capitalists. Apart from sugar mill and real estate owners, some of the lands are in the clutches of leaders from the BJP and Congress. While the land loot goes on, the government is giving the argument that it is merely the caretaker of the Betia Raj land and the Land Reform Act is not applicable here. That means, in effect, that the old British law will apply here! The government is bent on evicting around 8200 poor families in Motihari, Betiya, Bagaha, Majholiya, Madhopur Cantt and Madhubani Block . Notice has been issued to 4200 homes in Betiya, and the demolition of 1017 houses in the centre of the town has already started. Of these, 200 homes have already been razed despite the poor having settled in Dolbagh mohalla for more than 30 years. All of them have Adhaar cards; their names are on the voting list; some even have Indira Aawas.

The Auxiliary Nurse Midwife (ANM) nurses, after agitating in vain since November 3 to demand equal pay for equal work and permanent status for their jobs, militantly gheraoed the Secretariat in Patna for a full 4 hours on 13 December. They were assured that a meeting would be arranged with the health minister and principal secretary (health) on December 18 to discuss their demands and reach a decision. Instead ANMs were lathicharged on December 18th, and two leaders of the Bihar State Non-Gazetted Employees Federation (Gope faction) – Comrades Rambali Prasad and Premchand Sinha – who had gone to meet the state health department officials, were picked up by the police and detained, without any clear reason being given for the detention.