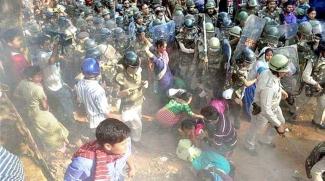 The anti-people, anti-poor policies and activities of the BJP led Sarbananda Sonowal government in Assam has once again been reflected in the eviction of more than 500 families in the Amchang wildlife sanctuary area. This harrowing atrocity left people in open amidst chilling winter, even the schools have not been spared by bulldozers. It is the time for annual exams in schools and this destruction has caused the loss of a complete year for the kids. This eviction, like the ones in other parts of the country, has been done by misusing a high court order for protecting the forest areas.

The people evicted are those who fled from mostly Dhemaji and Majuli due to the loss of their entire lands in floods. The majority of them belong to the Mishing community. No governments yet have taken any proper measures towards their rehabilitation. They have been subjected to periodical eviction by previous governments as well. The BJP that resorted to the slogans of protecting JATI, MATI, BHETI (Community, Land, Base) before coming to power in Assam is now engaged in uprooting people from their base and livelihoods.

It is also admitted by the government that these evicted families were living in this area prior to its being declared the Amchang Reserve Forest in 2004. Therefore, the right of the tribal people, even if assumed to be living within the Reserve Forest, ought to have been settled under the Forest Rights Act 2006.

The portrayed concern of the BJP Government towards protecting wildlife is also a cruel joke. Right after coming to power in 2016 the Sonowal Government has given hundreds of bighas of lands to Baba Ramdev's Patanjali company. This huge area happens to come under the elephant corridor in Sonitpur district. The assurance given by the Government in this regard was that it would provide employment to the local people. This assurance has also proved to be futile when the locals were specifically denied employment in the company. Widespread protests were also seen regarding this incident. After the Amchang incident, apprehensions are rising that the evicted lands will be handed over to big corporates, though the Government hasn't said anything as such. The Government has turned a blind eye towards the cement factories constructed within 150 and 350 metres from Amchang!

The Amchang eviction is not the only one that Assam has witnessed in recent times. The eviction in the Sipajhar area of Darrang district just a fortnight before was very similar in nature. The settlers in that area are largely Muslims who fled from Dhubri and nearby areas after losing their lands in floods. They claimed to have legitimate documents of land purchase and had been living in the area for more than a decade. Conscious efforts were made to give that incident a communal colour and vilify the settlers as illegal immigrants. While the NRC process in underway with the supervision of the Supreme Court, the BJP is continuing to fulfil its communal agenda by fueling hatred against these settlers by branding them illegal immigrants.

In August, draconian charges were slapped on the Borgaon tea garden workers who were demanding payment of their bonus and lifting of an illegal lockout. Now, in December the owner of the Bogidhola tea garden in Golaghat district opened fire on workers who had been demanding the bonus due to them for the past nine months.

Unable to answer the questions raised by people, the BJP Government in Assam has become increasingly autocratic. The slapping of NSA on Akhil Gogoi is another incident indicating the Sonowal Government’s fascistic attitude. Three other activists of KMSS – Bedanta Laskar, Dharjya Konwar, Gopi Saikia have been arrested for protesting against the Amchang evictions. Large scale intimidation is also underway.