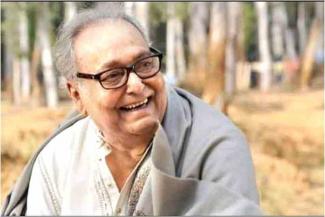 Paying tribute to the legendary actor of Bengali theatre and cinema Soumitra Chatterjee, CPIML general secretary Comrade Dipankar wrote, “Adieu, Soumitra Chatterjee! For decades you strode like a colossus on the cultural canvas of West Bengal, and now you won't be around when West Bengal is fighting the biggest battle ever to save its cultural soul and social ethos. Your legacy will inspire us to win this battle.”

Today, the people of India recall Soumitra Chatterjee as the unforgettable “Apu” and “Feluda” of Satyajit Ray’s films. They also remember him as a public intellectual who spoke up boldly for secularism till his last day. One of his last acts of public protest was to sign his name on a protest banner against the CAA NPR NRC.

His last published piece appeared in the CPIM organ Ganashakti’s festival number, where he said “I still believe that the Left path is the only alternative,” and spoke up against communalism. He wrote: “I am surprised that the man during whose tenure Gujarat witnessed communal riots in 2002 is now ruling India. Indians are tolerating these people and voting them to power once again….So many people are dying during the pandemic and yet there is politics in the name of Ram.” Denouncing lynchings in the name of beef he asked, “How can someone put a diktat on what to eat?” Referring to demolition of the Babri Masjid, Chatterjee wrote, “I will always raise one question. Where were the political parties that could have stopped it? Speaking against the incident is not enough. People should have been brought together under their flags.”

In 2018, Soumitra Chatterjee joined other eminent poets, novelists, writers, human rights activists, and actors to issue a call to the people of West bengal to join a protest rally on 8th April from Esplanade to Rabindra Sadan against the Islamophobia and communal violence that gripped many parts of the state on the eve and on the Ramnavami Day, 25 March, when the BJP MP of Asansol, Babul Supriyo and the RSS whipped up a communal frenzy.

In 2019 Soumitra Chatterjee and 48 others had signed a letter to the Prime Minister following the lynching of Tabrez Ansari in Jharkhand, expressing anguish and concern at such lynchings, and especially at the fact that Ansari had been forced to chant “Jai Shri Ram” (Victory to Lord Rama) by his tormentors and killers. Right-wing public personalities including Kangana Ranaut had written a counter letter accusing Soumitra Chatterjee and others of being out to “break India”, and had demanded sedition charges against him. PM Modi, in a veiled reference to the protest letter against lynching, said in speeches during the Bihar elections, “They (the opposition) are part of the Break India gang, they want to stop you from saying Jai Shri Ram.” Following Soumitra Chatterjee’s death however, Modi and Shah, with an eye on West Bengal elections in the near future, hypocritically tried to claim him as a “Bengali icon.” But Soumitra da was much than that: he was a fine artist and a sensitive, conscientious human being, who used his voice to defend India’s constitution and secularism from the BJP and RSS. The true tribute to his memory would be to put up a determined fight against BJP’s communal politics in West Bengal.

The world we knew

I often think of my childhood friend Benu these days. In these troubled times, his face returns to me, floating before my eyes. We lived in the same neighbourhood in Krishnanagar. Benu – Benu Rahman – was my Fazlukaka’s son. Benu was more Hindu than Hindus. I would get irritated because he followed so many of those rules and rituals. And he would say to me, “Pulu, you should follow some of these,” but I would scold him.

I also think about Rupchand jethu (Rupchand Tapadar). I didn’t meet him when I went home for the pujo vacation. What a scolding I got when he found out!! Rupchand jethu was a Christian.

That was the world we knew.

When elders visited our home, I would touch their feet. It made no difference whether they were Hindus or Muslims or Christians. Yes, I had heard the word ‘communalism’ as a child, but it didn’t really make an impression on my mind. Why? The situation, the environment for the word to be significant was not there. The riots of ’46 had no effect in any part of Nadiya. Not in Krishnanagar either. But now? I truly feel despondent about where we are now. What is this darkness in the country I know? And will it ever be able to come out of this darkness? I do not know if I will ever see, once again, the country I knew.

I am surprised that the man who was in power in Gujarat during the horrific riots of 2002 is now the man on the throne of India. The people of India are tolerating him and his party. They are being re-elected. Perhaps people can’t see a powerful alternative. Or they are unable to understand the toxic nature of this politics.

During this pandemic, many people are getting infected, so many are dying. In a word, this is intolerable. But politics in the name of Rama continues in the midst of all this.

The funny thing is, since childhood, we all know the Rama in whose name they want to build a temple. For hundreds and thousands of years, Rama has lived in a space of love and inspiration. Tell me, the Rama who went to live in the forest to carry out the promise made by his father – would he live in a grand temple? Of course, carrying out his father’s words, living in the forest – these are only stories. But our values are shaped by them. They become the symbols of our values. But where are these values now? We are actually letting go of our culture.

If anyone can be an alternative, it is the Left. But where is their steadfastness? Are they inspiring belief in people’s hearts? When I face these questions, I feel despondent. I don’t know where this country is going to end up. The Right is gaining in strength all across the world.   We see many forms of injustice – which cannot take place unless the authorities keep their eyes shut. My question is – how do we change this?

In our country today, we have gau-sevak and gau-rakhshak. We hear that the cure for Covid is cow urine, or that the virus will disappear if we bang plates and light candles. And then we hear claims that India is a great and powerful nation!

I can’t express in words the anger I feel when I see the drama about eating beef. Where else can you get such high protein for such low prices? People around the world eat beef. Most important, who is anyone to decide what others can and cannot eat? A Hindu might object to eating beef. But why should that objection be imposed on someone else? Dictating other people’s food habits – is this the level to which we have descended. Muslims are being murdered in the name of eating beef. We have not seen this before in India – we saw India at a time when even our school textbooks told us what this nation is built on.

In conclusion, I want to say that religion and politics are being cleverly mixed to produce fundamentalism. Who loves Rama and who loves Rahim should not even be an issue. Again, this is why I feel that only the Left can be an alternative to all this.

We, as peace loving and proud Indians, are deeply concerned about a number of tragic events that have been happening in recent times in our beloved country.

Our Constitution describes India as a secular socialist democratic republic where citizens of all religions, ethnicities, gender and castes are equal. Hence, to ensure that every citizen enjoys the rights given to her/him by the Constitution, our submission is:

1. The lynching of Muslims, Dalits and other minorities must be stopped immediately. We were shocked to learn from the NCRB (National Crime Records Bureau) reports that there have been no less than 840 instances of atrocities against Dalits in the year 2016, and a definite decline in the percentage of convictions.

Further, 254 religious identity-based hate crimes were reported between January 1, 2009, and October 29, 2018, where at least 91 persons were killed and 579 were injured (FactChecker.in database, October 30, 2018). The Citizen's Religious Hate-Crime Watch recorded that Muslims, (14% of India's population) were the victims in 62% for cases, and Christians (2% of the population), in 14% cases. About 90% of these attacks were reported after May 2014, when your Government assumed power nationally.

You have criticized such lynchings in Parliament Mr. Prime Minister, but that is not enough! What action has actually been taken against the perpetrators? We strongly feel that such offences should be declared non-bailable, and that exemplary punishment should be meted out swiftly and surely. If life imprisonment without parole can be the sentence in cases of murder, why not for lynchings, which are even more heinous? No citizen should have to live in fear in his/her own country!

Regrettably "Jai Sri Ram" has become a provocative 'war-cry' today that leads to law and order problems, and many lynchings take place in its name. It is shocking to see so much violence perpetrated in the name of religion! These are not the Middle Ages! The name of Ram is sacred to many in the majority community of India. As the highest Executive of this country, you must put a stop to the name of Ram being defiled in this manner.

2. There is no democracy without dissent. People should not be branded ‘anti-national’ or 'urban Naxal' and incarcerated because of dissent against the Government. Article 19 of the Constitution of India protects freedom of speech and expression of which dissent is an integral part.

Criticising the ruling party does not imply criticising the nation. No ruling party is synonymous with the country where it is in power. It is only one of the political parties of that country. Hence anti-government stands cannot be equated with anti-national sentiments. An opn environment where dissent is not crushed, only makes for a stronger nation.

We hope our suggestions will be taken in the spirit that they are meant – as Indians genuinely concerned with, and anxious about, the fate of our nation.