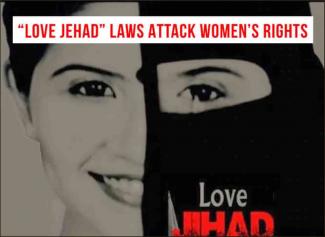 (In the wake of the decision by various BJP state governments to enact laws criminalising “love jehad”, we reproduce statements by the All India Lawyers’ Association for Justice and the All India Progressive Women’s Association, on the issue.)

(Statement by All India Lawyers’ Association for Justice)

All India Lawyers’ Association for Justice condemns the announcements of various BJP- ruled states to pass a law against ‘love jihad’, a pejorative and communal term for inter-religious marriages, which has no basis in fact or law. AILAJ believes that every person has the right to marry or not, and to select their partners as per their will and desire. It is demanded that the Governments, instead of pursuing a communal agenda that penalizes those who exercise their constitutional freedoms, take immediate steps to enact a law that would specifically cover the field of so-called ‘honour’ crimes as directed by the Hon’ble Supreme Court in the case of Shakti Vahini vs. Union of India (UOI) and Ors. [AIR 2018 SC 1601].

BJP’s statements unlawfully terming the concept of inter-religious marriages as ‘love jihad’ go against the very essence of Articles 14, 21 and 25 of the Indian Constitution, which recognize the fundamental right of an individual to equality, to live with dignity and to freely profess, practice and propagate religion, which cumulates in every individual’s right to love and marry a person of one’s choice. The statements are a direct attack on the Constitution and the individual freedoms of the people in this country.

Justice DY Chandrachud in his concurring judgment in Shafin Jahan Vs. Ashokan K.M. & Ors. [(2018)16 SCC 368], popularly known as the ‘Hadiya judgment’ held that the right to marry a person of one’s choice is integral to Article 21 of the Constitution and that matters of belief and faith, including whether to believe are at the core constitutional liberty and that the Constitution exists for believers as well as for agnostics and that it protects the ability of each individual to pursue a way of life or faith to which she or he seeks to adhere. It is further held that, “Matters of dress and of food, of ideas and ideologies, of love and partnership are within the central aspects of identity... Society has no role to play in determining our choice of partners.”

A Division Bench judgment by the Kerala High Court in Anees Hameed Vs. State of Kerala [ILR 2017(4) Kerala 389], the Kerala High Court held: “We are appalled to notice the recent trend in the state to sensationalise every case of inter-religious marriage as either love jihad or ghar wapsi. Disturbing news is coming from several parts of the country that young men and women who undergo inter-caste marriages are threatened with violence or violence is actually committed on them. In our opinion, such acts of violence or threats or harassment are wholly illegal and those who commit them must be severely punished. This is a free and democratic country and once a person becomes a major, he or she can marry whosoever he or she likes.”

In fact, on 04.02.2020 in response to queries on “love jihad” cases, the Hon’ble Minister of State in the Ministry of Home Affairs Shri G. Kishan Reddy responded stating: (a) to (c): Article 25 of the Constitution provides for the freedom to profess, practice and propagate religion subject to public order, morality and health. Various courts have upheld this view including the Kerala High Court. The term ‘Love Jihad’ is not defined under the extant laws. No such case of ‘Love Jihad’ has been reported by any of the central agencies. However, two cases from Kerala involving inter- faith marriages have been investigated by the National Investigation Agency (NIA).

We demand that instead of creating issues, the BJP governments should focus on addressing the rampant murders of couples, solely because they belong to different castes and communities, called “honour killings”. In fact there is complete failure of the Governments to tackle the same.

In Lata Singh v. State of U.P. [(2006) 5 SCC 475], the Supreme Court directed the administration and police authorities throughout the country to ensure that “if any boy or girl who is a major undergoes inter-caste or inter-religious marriage with a woman or man who is a major, the couple are not harassed by any one nor subjected to threats or acts of violence, and any one who gives such threats or harasses or commits acts of violence either himself or at his instigation, is taken to task by instituting criminal proceedings by the police against such persons and further stern action is taken against such persons as provided by law.” The Court further notes on dangers of ‘honour’ killings, and notes that there is nothing honourable in such killings, and in fact they are nothing but barbaric and shameful acts of murder committed by brutal, feudal minded persons who deserve harsh punishment.

In fact, in Shakti Vahini vs. Union of India (UOI) and Ors. [AIR 2018 SC 1601], the Supreme Court prescribed a slew of recommendations to ensure the protection of couples who enter into inter-caste or inter-religious marriages. It prescribed that a law on the lines of abolition of ‘sati’ and ‘dowry’ be implemented to fight the social menace of ‘honour killings’. However, till date, the directions and recommendation of the court have been ignored and statements are made time and again to threaten the freedom of individuals in their choice of life and practicing religion.

It may be noted that Article 16 of the Universal Declaration of Human Rights underscores the fundamental importance of marriage as an incident of human liberty and states that the men and women of full age, without any limitation due to race, nationality or religion, have the right to marry and to found a family and that they are entitled to equal rights as to marriage, during marriage and at its dissolution, and that such family is entitled to protection by society and the State.

The proposed law is also problematic because the structures of caste and religion are kept in place by the structure of arranged marriage. In fact when young people exercise their right to love across lines of caste, religion and gender, they are doing so at enormous personal risk and in the process disrupting existing lines of social authority. Thus, the right to love is not just about personal autonomy but about challenging rigid social structures. By doing so, lovers open out space in existing culture for all of us.
Instead of implementing the decisions of the Apex Court in ensuring the protection of the free, secular, fraternalistic and democratic principles of the Constitution based on which the country thrives, the politicians are propagating inequality, hatred and are snatching away the rights of the people of this country. Such statements are steeped in patriarchal, paternalistic notions, where women need to be “saved” from “predatory” men, thus denying the agency and the autonomy of the woman, which is yet another mode for controlling women. This is in furtherance of the communally divisive ideology of the Sangh Parivar. AILAJ condemns these statements and seeks that the constitutional principles and democratic rights are upheld by the elected representatives of the country.

Many BJP-ruled State governments have announced that they are going to make a law against ‘Love Jihad’. Central Minister Giriraj Singh has also demanded such a law in Bihar. AIPWA strongly opposes any such law because such a law would be a lethal attack on the freedom of Hindu women and their Constitutional right to make their own decisions in life. Such a law has no place in the India that believes in Ambedkar’s Constitution.

Till date the police, investigative agencies, and courts in many States and the country have said that there is no such thing as ‘Love Jihad’. There is no proof for saying that Muslim youth are hatching a conspiracy to convert Hindu women under the guise of love. The truth is that the youth of India are breaking the bonds of caste and religion and falling in love, and this is to be welcomed as beneficial to the country. According to the BJP, if a Hindu woman loves a Muslim man it will be considered ‘Love Jihad’ and legal action will be taken against this. All in all, a legal weapon is being handed to ‘honor crime’, the patriarchal violence against love.

Standing resolutely against Manuvadi patriarchal forces, Dr Ambedkar had passed the Hindu Code Bill that has many provisions for equality and freedom of Hindu women. Laws against the dowry system and Sati practice were made after long battles. The law against ‘Love Jihad’ is a BJP conspiracy to weaken these laws and snatch away Constitutional rights of Hindu women. Therefore today the danger to Hindu girls and women is not from Muslim youth but from the BJP which is playing politics in the name of Hindus. History is witness to the fact that all ruling forces that run the government in the name of any religion are the enemies of women’s rights.

Love can never be a ‘jihad’ or a war. Nikita Tomar was stalked and murdered by a Muslim youth –but that was not ‘Love Jihad’ because Nikita was not in love with that youth. Stalking and killing was also done of Priyadarshini Mattoo by Santosh Singh. Similarly, some Hindu youth killed Gulnaz in Bihar—that is also patriarchal violence, not ‘Prem Yuddh’ or ‘Love Jihad’.

Any adult citizen has the right can adopt any religion according to his personal wish and discretion and take their own decisions in matters of love and marriage. Actually, religious conversion for marriage takes place largely because the Special Marriage Act requires one month’s notice which gives room for violence against such marriages. People resort to religious conversion to escape this violence. AIPWA demands that the provisions of the Special Marriage Act should be changed and the one-month notice period should be scrapped.

AIPWA appeals to the women and youth of the country to stand up and be counted to save freedom and autonomy. Where better laws and action are needed against ‘hate’, BJP wants to make a law against ‘love’! We appeal to the people of the country to foil this conspiracy by the BJP.