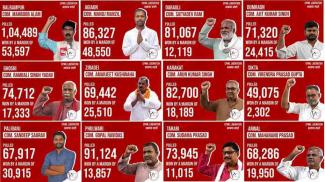 The Left is being much talked about after the Bihar Assembly election results. The three Left parties in the Mahagathbandhan have won 16 seats in this election. CPIML contested 19 and won 12 seats; CPI and CPM contested 6 and 4 seats respectively and won 2 each. This the largest tranche of Left representatives to reach the Assembly in the last one and a half decades and that is why the Left, especially CPIML, is now constantly the focus of discussion.

For the past many days the simple lifestyle of Balrampur MLA Mahboob Alam has been viral on social media. Posts of his simple lifestyle and very modest ‘kachha’ house were shared by even those who are not Left supporters. He has now been re-elected to the Assembly by the largest number of votes, getting 104489 votes and defeating nearest rival by 53597 votes. It is interesting to note that the nearest rival was the BJP candidate in 2015 and contested as VIP candidate in this election as the BJP gave the seat to the VIP. In other words, BJP gave its ally not only the seat but also the candidate!

However, Mahboob Alam is not the sole Left candidate to live simply. Simple living is the rule rather than the exception in the tradition of the Left, especially CPIML. That is why material wealth is not an eligibility criterion for getting a ticket in ground-struggle parties like the CPIML. A labour leader in Patna said during the election campaign, “At such a time when tickets are being auctioned to the highest bidder in other parties, Maley has given the ticket to a poor man who does not even own a house! This is indeed unique”. He was speaking of CPIML candidate from Phulwari (Patna District) Comrade Gopal Ravidas. The same Gopal Ravidas who got elected to the Phulwari seat will 91124 votes.

Leaders are made in the CPIML through the touchstone of struggles. There can be no better example than Comrade Manoj Manzil. 32 year old Manoj who won the Agiaon seat with 86327 votes and a margin of 48550 votes comes from a landless dalit family. His father and mother work in a brick kiln. In his early days he was active in AISA. The family’s finances were so straitened that after he was married (at a very young age) it became a problem to find space for his wife to stay. But Manoj never thought of poverty as his personal problem; for him it was an issue of struggle for thousands like him who were landless, poor, dalit and deprived. For the last one decade, any struggle against oppression or atrocity in his area saw Comrade Manoj at the forefront holding the red flag aloft.

He got the third place in the 2015 election but he was always first on the struggle front. Manoj could be seen in every fight for justice, be it sand workers’ struggles or struggles against feudal oppression. His ‘Sadak par School’ campaign drew people’s attention to the dire conditions in government schools run by the Nitish government that boasted about ‘development’. Through this constructive campaign he also attracted people’s attention to himself.

All 12 newly elected CPIML MLAs are well-known faces through people’s struggles. Virendra Gupta who won the Sikta seat put his own life at risk to relentlessly fight against feudal forces for the rights of the landless poor. On the one hand there was the Shikarpur Estate representative fully armed with money and muscle power; on the other hand was Comrade Virendra Gupta running for election on the power of the landless, the poor and the farm laborers. In the end, the rural poor ensured the victory of their comrade-in-arms who stood with them in their struggles!

Arwal is an old battleground for the struggles of the CPIML. Laxmanpur Bathe falls in Arwal, where on 1 December 1997 the feudal army Ranveer Sena massacred 58 dalits and backward section people, including a large number of women and children. When Ranveer Sena Mukhiya Brahmeshwar Singh was asked why women and children were killed, he replied that children were killed because they grow up to become Naxals, and women were killed because they give birth to Naxals. BJP leader Giriraj Singh sees the epitome of Mahatma Gandhi in this cruel and barbaric Brahmeshwar Mukhiya; this speaks volumes for his and the BJP’s character.

CPIML’s Comrade Mahanand Singh has won the Arwal seat for which the election was held on 28 October in the first phase. On the same day in the morning a gentleman adorned with a trishul-like tikka came to our campaign vehicle and said, “Be assured, Mahanand is winning; our people have left on motorcycles to vote for him”. In the neighboring District to Arwal, Jehanabad, trade union leader Rambali Singh Yadav of the CPIML has been elected to the Assembly from the Ghosi seat.

CPIML had 3 MLAs in the last Assembly. All three—Mahboob Alam, Satyadev Ram and Sudama Prasad—have been re-elected to the Assembly with an even bigger margin than last time. These 3 MLAs were the strongest Opposition voices in the last Assembly. They consistently raised the people’s issues inside and outside the Assembly with posters and banners, and many times the Honorable Speaker could be seen requesting them not to wave posters and placards. On one occasion the Speaker said to CPIML LoP Mahboob Alam, “You have once again brought a poster. Why do you trouble the postermakers every day!” Obviously the issues raised in the posters were making the ruling powers uncomfortable. On another occasion the Speaker said, “Mahboob Ji, do remember the meaning of your name. It is Mahboob”. They expected CPIML MLA ‘Mahboob’ to show some ‘Mohabbat’ (love) towards the ruling powers. But he is the people’s ‘Mahboob’; he will not set aside the people’s issues to show love to the ruling powers!

On one occasion Chief Minister Nitish Kumar was so flustered by MLA Satyadev Ram’s questions that he lost control of himself. Comrade Satyadev Ram raised the question of distributing ‘fazil’ ceiling land and other government lands among the poor. When Nitish Kumar became CM for the forst time the Land Reforms Commission was constituted led by D Bandopadhyay. The report submitted in 2008 by the Commission gave data of lands in Bihar and made recommendations for distribution of land among the poor. Under pressure from big land owners, Nitish Kumar put the Land Reforms Commission report in cold storage. It was in this context that Darauli MLA Satyadev Ram raised the issue of allotment of land to the landless, when Nitish Kumar exploded in frustration and said, “Where is the land? This is ‘bakwas’ (rubbish)’. The frustration was double edged: the CPIML MLA raising the issue on the one hand; and his bowing down to the diktat of land owners on the other hand, leading to the shelving of the Commission report.

This same Satyadev Ram who forced CM Nitish Kumar to explode in frustration was re-elected from Darauli with 81067 votes and a margin of 12119 votes.

Young, CPIML faces fresh from student politics have also found places in the new Assembly: RYA Honorary President Comrade Amarjeet Kushwaha from Jeeradei in Siwan; former JNUSU Secretary and AISA National General Secretary Comrade Sandeep Saurav from Paliganj; RYA Bihar State President Comrade Ajit Kushwaha from Dumraon. Of these, Amarjeet Kushwaha is in jail for the past 5 years on a false and fabricated case. Fighting the election from jail, he won the seat with 69442 votes and a margin of 25510 votes.

A wonderful mélange of experienced as well as young leaders ready to fight on the streets for people’s rights is in the Assembly now. Now it is the turn of issues on the streets to find their place inside the Assembly. The issues of education, employment, health, and land for the landless that were raised during the election campaign will now echo inside the Assembly. During the campaign BJP leaders including the BJP President tried to make the people afraid of Maley; inherent in this attempt was the BJP’s own fear that MLAs who would relentlessly pursue people’s issues would reach the Assembly. Their fear has now been turned into reality.