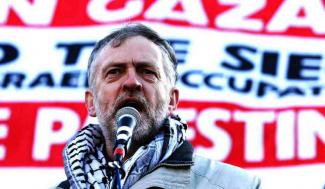 On October 29, news of former leader Jeremy Corbyn’s sudden shock suspension from the Labour Party spread rapidly across the UK. That morning, a report had been published by the Equalities and Human Rights Commission (EHRC) inquiring into anti-Semitism in the party. In the wake of the report, Corbyn claimed that the scale of anti-Semitism in the party had been ‘dramatically overstated for political reasons’ – and was promptly suspended. He has now been reinstated by the National Executive Committee (NEC) following a major public outcry from Labour members, including many Jewish members. However, current leader Keir Starmer has unilaterally withdrawn the whip from Corbyn, effectively meaning he is now an Independent MP (in his North London seat, where he has served since 1983 and remains immensely popular).

From the outset, Corbyn’s lifelong support for Palestinian rights has made him a target for the Israeli state and its supporters in the UK establishment, including inside the Labour Party. In 2018, pressure was mounted on Corbyn’s then-leadership to adopt in full the International Holocaust Remembrance Alliance (IHRA) definition of anti-Semitism, which allowed criticisms of the Israeli state to be framed as examples of anti-Semitism. When the leadership did eventually adopt the full definition, they emphasised that this would not preclude criticism of Israel or championing of Palestinian rights, which was framed as controversial by the party’s right and the wider establishment. The mainstream media coverage of this episode fed into a wider smear campaign branding Corbyn and his supporters as anti-Semitic, a phenomenon Corbyn alluded to in the comments which led to his suspension. This coverage included claims that 34% of the membership held anti-Semitic views (the actual figure is closer to 0.3%, the lowest of any UK party). Many of the cases of anti-Semitism which have been put forward in the past few years have been supported by little to no evidence aside from comments about Israel. Meanwhile, a report leaked in April demonstrated that genuine cases of anti-Semitism had been ignored by internal staff loyal to the right wing of the party, in order to further discredit Corbyn’s handling of anti-Semitism.

When Corbyn was reinstated on November 17, Starmer declared that ‘this is a sad day for Jewish people’ – entirely ignoring the swathes of Jewish Labour members that have continued to staunchly support Corbyn throughout this episode. Shortly after his suspension, Jewish members in Corbyn’s constituency penned a letter (which only progressive, local newspapers were prepared to publish) asserting Corbyn’s support for the local Jewish community, and urging Starmer to reinstate him instantly. These Jewish party members, and Jewish supporters of Palestine in general, have consistently spoken out against the insidious weaponization of anti-Semitism to silence any criticism of Israel – and have faced more hostility and abuse for this position than anyone else, often being called ‘self-hating’ by opponents.

Corbyn is not the only Labour politician to be targeted for criticizing Israel. The day before Corbyn was reinstated, Gemma Bolton, a newly-elected member of Labour’s National Executive Committee was placed under investigation for a 2018 tweet calling Israel an apartheid state, and in June, left MP Rebecca Long-Bailey was dismissed from the Shadow Cabinet for tweeting an interview which mentioned Israeli Secret Services teaching US Police violent tactics. Meanwhile, Rachel Reeves – an outspoken admirer of the notoriously anti-Semitic, Nazi-supporting 1930s Conservative MP Nancy Astor – remains in Starmer’s shadow cabinet, speaking volumes about his supposed commitment to rooting out anti-Semitism within the party. Clearly, Starmer’s real focus is rooting out anyone that dares to criticise Israel – which includes many on the left of the party. On a personal level, Starmer has close links with the Israeli state, and has cast being the polar opposite of Corbyn as the defining feature of his leadership. As Jewish South African politician Andrew Feinstein has pointed out, this weaponization of anti-Semitism to fight factional political battles, and to silence criticism of Israel, trivialises real anti-Semitism.

Ironically, equating criticism of Israel with anti-Semitism amounts to equating Jewish people with the state of Israel – itself a form of anti-Semitism, according to the IHRA definition which Starmer has championed.

There is a clear strategy here: rooting out not anti-Semites, but leftist members. Anti-Semites can stay, so long as they don’t criticise the Israeli government. Those at the helm of the insidious smear campaign around anti-Semitism have gained power within the party. It is noteworthy that Corbyn’s suspension came during the NEC elections, in which a large number of left candidates were expected to win. For many on the left, the suspension was the final straw – after six months which saw revelations of internal sabotage from the party’s right in the 2017 General Election, followed by multiple suspensions and penalising of left MPs for fabricated reasons or simply for their politics – prompting them to tear up their membership cards and leave Labour for good. But people quickly caught on that a mass exodus of left members during the NEC elections was exactly the outcome those behind the suspension had been hoping for. Ultimately, the left candidates did retain a significant presence on the NEC. However, seven months on from the end of Corbyn’s leadership, the future of the left within Labour remains uncertain.

Many have talked of a new party being formed. But Corbyn himself is unlikely to form a new party, despite no longer being an MP for the party he has remained loyal to and kept faith in for over four decades. Besides, many struggle to imagine a non-mainstream party attracting new members on the scale that Corbyn’s Labour did when he became leader in 2015. Regardless, at this time of unprecedented economic hardship in the wake of a global health pandemic, enduring institutional racism, anti-Semitism and xenophobia and a deepening climate crisis, and with a far-right government set to remain in power for another four years, the left must devote itself to building and strengthening movements which can lay the groundwork for a genuine alternative to become a reality.