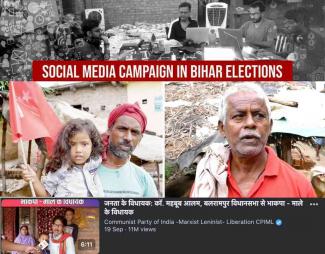 The Bihar Assembly Elections held in October-November 2020 was one of the first elections for CPIML Liberation where the social media and ground level campaign strategy were used in tandem. Amid the COVID -19 pandemic and BJP-RSS’s fake news industry, the party’s intervention in social media was inevitable and necessary.

Somewhere in September, a small team of cadres with experience in social media went from the Central office to the Bihar State Office. Soon we realised that the task in front of us was daunting. But amid all the challenges and roadblocks, we found a way out. Innovation became the norm. Have you ever heard of a ‘war room’ (as media used to call the social media campaign centres of various parties) operating without any broadband connection? We did it! The party’s office in Kadamkuan in Patna is an area where, for some reason, no service provider could provide broadband. With various permutations and combinations and multiple trial and errors, finally we managed to find a way around using simple mobile internet.

First, we began with an on-the-move 'war room' – relocating from one room to another depending on which room was free. Seeing us try to find a stable place to work, our comrades in the Bihar office created an entire ‘war room’ in a matter of a few hours, with much ingenuity and creativity.

The core factor that helped in driving the social media campaign was the rich history of our party’s struggles and sacrifices of thousands in Bihar. No matter where we travelled, we found stories of the party’s struggle and sacrifice and thus our cameras never stopped rolling.

It was at Bhojpur’s Ekwari, one of first places in Bihar where the fire of the Naxabari movement rose, where we found our opening visuals for our campaign. The first visual was of a 5 year old girl with the flag of CPIML Liberation, shouting, ‘Inquilab Zindabad’ (Long live the revolution). Soon our camera panned to a corner where a 70 year old was standing in a red shirt. “It was CPIML Liberation that fought for our right to sit on the cot, for our wages. We will vote for CPIML Liberation even if we are killed," he said.

Between the old man and the child, four generations have passed but the flame of Naxabari is still alive in their eyes. And that was aim of our campaign, to keep this flame alive for the generations to come that will be more tech savvy and glued to visuals.

One of the videos worth mentioning and that increased our aspiration, was of CPIML MLA Comrade Mahboob Alam that broke all our earlier records and crossed 11 million views. This video gave us the more insights into the world of social media campaign and helped in better strategising our campaign.

What was unique about our social media campaign compared to others. We did not have corporate campaign companies or consultants that were churning out abstract posters or videos. Every poster and video produced from the ‘war rooms’ in the Bihar State Office or at constituency level ware a product of people’s movements and voices. One of the biggest task of circulation of campaign materials was at the constituency level, with hundreds of WhatsApp groups created at block and panchayat level. This was done manually by comrades going to each area and gathering numbers and adding people to groups. Without this, our campaign would have come to a standstill.

As our first experience in a large scale social media campaign, Bihar elections helped us in synergising our strategy based on whatever resources available. At the same time, it exposed a lot of gaps that needs to filled. One such is the need for the social media communication strategy to become part and parcel of the party’s organisation structure. 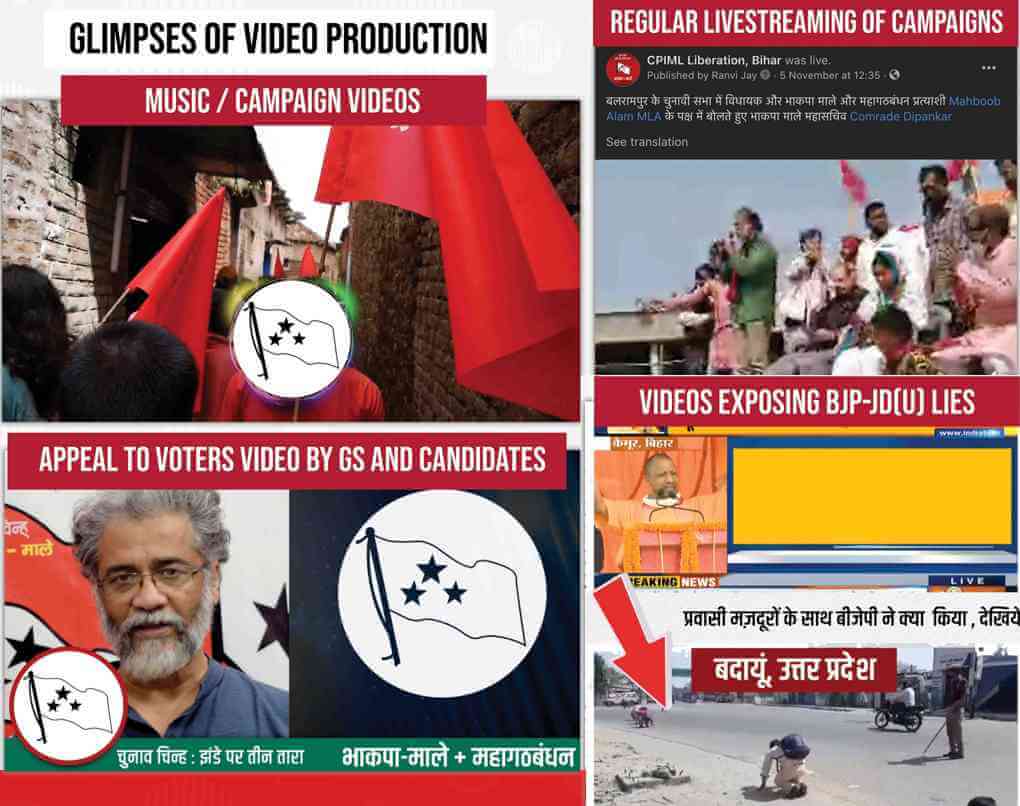