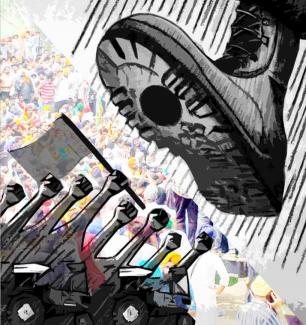 The farmers' movement in India for the repeal of the disastrous farm laws of the Modi government has now entered the fourth month. In these three months the movement has demonstrated limitless creative energy, courage, imagination and resilience. The regime had tried to nip the movement in the bud by blocking their entry into Delhi, but the farmers fought back by occupying the borders and setting up huge protest sites. By stopping farmers from pitching their tent on Delhi's Ramlila Maidan, the Modi government made sure we got four protest sites surrounding the capital.

The protests reached a pinnacle on the Republic Day, with Delhi denizens lining up on two sides of roads to applaud the protesting farmers holding their unforgettable tractor parade. But the regime and its lapdog media reduced the parade to the stray incident of a few people hoisting the Sikh religious flag on an empty pole in the Lal Qila ramparts. With massive media blitzkrieg discrediting the movement as anti-national anarchy and conspiracy, the regime unleashed its trademark weapons of fabricated charges under draconian laws and the tango of police repression and orchestrated attacks by organised thugs. For a few hours it looked like the regime had managed to overpower the unprecedented upsurge of India's farmers.

The farmers movement overcame that juncture of crisis with remarkable resilience. It has now come back stronger with wider and deeper support across North India and louder resonance than before in other parts of India. The rise of Rakesh Tikait as a powerful face of the movement and the massive participation in Kisan Mahapanchayats in Western UP, Haryana and Rajasthan have once again put the government on the backfoot. The unity and strength of the farmers has once again blocked the option of crushing the movement through sheer repression. To counter the emotional impact of Tikait's tears Modi has gone back to shedding crocodile tears for small farmers and spinning a deceptive narrative about the 'harmlessness of the farm laws'.

Modi devoted his long speeches in both chamers of Parliament to this mission. He claimed that MSP and APMCs would continue as before, the laws are only empowering farmers with additional options regarding the sale of their crops. In Rajya Sabha, he targeted farmer leaders and others supporting the farmers' movement as 'andolanjeevi' (surviving on struggles) and 'parjeevi' (parasites). Obviously, he considers struggles as trouble, as organisers and leaders of struggles as troublemakers. This is just another way of presenting his case for making India's democracy 'opposition-free', or turning democracy into dictatorship by killing dissent. In Lok Sabha, he called the farmers' movement sacred but chastised it for raising 'impure' demands like release of political prisoners.

Clearly, the regime does not want farmers to talk about non-farm issues or non-farmer citizens to talk about farmers. In other words, the idea is to isolate the farmers and intimidate others who are supporting the farmers. This strategy is already being pursued to the hilt. The Modi government's ridiculous response to the tweets by Rihanna and Greta Thunberg and the arrest of climate change activist Disha Ravi in connection with the so-called Thunberg Toolkit Case are just two terrible examples of this strategy at work. By arresting Disha Ravi, the government is probably trying to kill several birds with one stone. It is a warning to India's own environmental movement, against making common cause with the farmers and against challenging corporate interests.

We must remember that the new labour codes, the farm laws and the subversion of environmental safeguards are all of a piece, they constitute the government's latest legal package to promote corporate interests at the cost of India's workers, farmers and environment. And looking at the way the Delhi Police violated all norms to arrest an activist from Bengaluru to put her in a Delhi prison, we can clearly say the central government is making it a habit to override all constitutional restrictions and federal norms. The Disha Ravi arrest is intended to be a message for all concerned that the Modi government is ready to go to any length in its war on India's farmers and India's Constitution.

For all of us supporting India's farmers and defending the constitutional foundations of rule of law in a secular democratic republic, the challenge is to defeat the Modi government's diabolical strategy. If the government is trying to weaken the solidarity for farmers, the response must be to build more active solidarity. If the government is trying to bombard small farmers with fraudulent propaganda about the farm laws, our job is to take the message of the movement to all sections of small and marginal farmers and agricultural labourers. If the government is hoping to project the movement as an expression of Jat power to alienate other social groups, our job is to bring the broader social composition of the movement to the fore. The farmers' victory will be the victory of all Indians who are fighting for their rights against corporate aggression and fascist offensive.