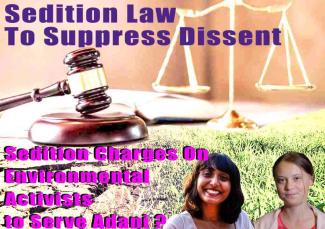 The Article-14 portal maintains a database on the sedition law for the last decade. Its analysis of the data is revealing. It found:

65% of nearly 11,000 individuals in 816 sedition cases since 2010 were implicated after 2014 when Modi took office. Among those charged with sedition: opposition politicians, students, journalists, authors and academics.

96% of sedition cases filed against 405 Indians for criticising politicians and governments over the last decade were registered after 2014, with 149 accused of making “critical” and/or “derogatory” remarks against Modi, 144 against Uttar Pradesh (UP) chief minister Yogi Adityanath.

A 28% increase in the number of sedition cases filed each year between 2014 and 2020, Modi’s time in office, compared to the yearly average between 2010 and 2014, the second term of the United Progressive Alliance (UPA) administration.

Much of this increase is due to a surge in sedition cases after protest movements, such as those against the Citizenship Amendment Act (CAA), 2019 and the rape of a Dalit teen at Hathras in UP.

Of the five states with the highest number of sedition cases, a majority were registered during the BJP’s time in power in four of them—Bihar, UP, Karnataka and Jharkhand.

In UP, 77% of 115 sedition cases since 2010 were registered over the last four years, since Yogi Adityanath became the chief minister. More than half of these were around issues of “nationalism”: against those who protested the CAA, for shouting “Hindustan Murdabad”, allegedly celebrating Pulwama attack and India’s loss in 2017 ICC Champions Trophy.

In Bihar, between 2010-2014, the majority of sedition cases related to Maoism and counterfeit currency. After 2014, 23% of sedition cases were against those who protested the CAA, against celebrities who spoke up against lynching and intolerance and those who allegedly raised “pro-Pakistan” slogans.

It is not just Modi’s Home Ministry and various BJP State Governments that are assaulting free speech and the right to protest. Modi’s crony Adani serially files defamation suits against journalists who report on its many corrupt and dodgy dealings.

But in late January 2021, the Adani group issued an “open letter” in which it made the mistake of explaining in Orwellian language, exactly what it meant by “freedom of speech.”

Titled 'An Open Letter on the need to act against false propaganda', the document was tweeted out by the Adani Group’s blue-ticked Twitter handle.

It began, “Dear Fellow Citizens, Freedom of speech is a fundamental right of any well-functioning democracy.” So far, so good. But the next sentence could not have been more revealing of the Adani Group’s heavy-handed authoritarianism, if it had been written by a satirist. It reads, “Adani Group believes in the free speech that promotes truth and serves the national interest.”

The next paragraph explained that “the national interest” is basically equivalent to the Adani Group’s interests. India is Adani and Adani is India, more or less. The letter says the Adani Group runs “critical assets essential for our country’s progress”. It then goes on to say that the local and international financial institutions that have “demonstrated faith and invested in the Adani Group”, have by doing so, displayed a “demonstration of faith in India.”

In the next section titled “Falsehoods cause immense harm”, the letter waxes on about how fake news does great harm, and how the Adani Group has been a “victim” of “false propaganda” and “manufactured online campaigns”.

Naturally, it then states that those who run campaigns against the Adani Group are of course enemies of India. The online campaigns against Adani operations, it claims, are “mounted by vested interests to sabotage India’s strategic interests.” Is this beginning to ring a bell? Does it sound like the FIR against Disha Ravi and Fridays For Future activists?

It then goes on to say that it respects the media fraternity very much, but is forced to take legal action “if, under the pretext of free speech, we see damage to our strategic interests.”

Not only is the Adani Group filing defamation suits to silence journalists – its letter is also exposing the mind of the Modi regime. The reason why the Modi Government will not back down on the farm laws, and will instead file sedition and UAPA cases against farmers’ movement activists and supporters and environmental activists, is because these activists and their toolkits are exposing how the farm laws serve Adani and its ilk; and launching effective campaigns against various Adani projects that harm the forests and environment in India and abroad.

In Modi Raj, it is clear that the entire regime and its police force encourage crony corporate loot and anti-minority hate, discrimination, and violence and criminalise any dissent or resistance to the above. We must fight back with all our might, exposing this pro-corporate, pro-Adani-Ambani, pro-hate toolkit of the Modi regime.

Teachers Against the Climate Crisis (TACC)

We demand that Disha Ravi be immediately and unconditionally released, and that the government stop victimizing environmental activists.

We are shocked by the arrest by the Delhi Police of Disha Ravi, a 22-year-old member of the environmental organization Fridays for Future, on charges of sedition and criminal conspiracy while raising support for the ongoing farmers’ protests. Non-bailable warrants have been issued against two others. Nikita Jacob and Shantanu Muluk. To mobilize support for the farmers’ protests is their basic political and constitutional right. In addition, the manner in which Disha Ravi was arrested and taken to Delhi violates detention norms laid down by the Supreme Court, and reflects disregard for basic democratic rights.

Attempts by the central government to cast youth-led climate organizations, or their members, as a threat to national security defies sanity. These organizations have been raising issues regarding the climate and other environmental crises, which in fact constitute the gravest threat to the security of the people of this country. The government’s own report, Assessment of Climate Change Over the Indian Region by the Ministry of Earth Sciences, details many grave changes already taking place, such as a weakening monsoon, accelerating sea level rise, and more frequent droughts. It warns of longer and more intense heat waves, more extreme rainfall events, and that a large part of the Indus and Ganga river basins will become unliveable by the end of this century if global greenhouse gas emissions are not reduced urgently.

The government has weakened environmental protection by diluting Environmental Impact Assessment (EIA) measures, potentially damaging carbon sinks, the forests on which millions depend. To support forest-dependent and agrarian communities in their struggles is simply an extension of the movements for environmental justice. Youth-led movements have campaigned against dilutions of the EIA, have spoken out against the destruction of ecosystems, and the expansion of coal use. This is the context in which they are now being targeted.

Our young activists have stood up for issues that will affect millions of today’s youth in the decades to come. They must be celebrated for the courage of their convictions and for speaking truth to power, not persecuted, intimidated, and criminalized. Expressing support for the farmers’ struggle or any other social and environmental justice issue, or for peaceful protests seeking change, is not just a fundamental right but a fundamental duty of a conscientious citizenry. Yet, these activists ‒ and numerous others in recent months ‒ have been targeted for exercising those very rights.

This is the most serious attack on the climate movement in this country. It has led to a lot of fear and anxiety among youth activists, students, and other young people. As a group of teachers, writers, and researchers from across the country engaged with the climate crises and other environmental challenges, we are not just proud of our conscientious youth, we draw inspiration from them. We unequivocally stand by them in their demand for more urgent climate and environmental action, and a safer, more just, and sustainable future. We forcefully condemn the Indian government’s unlawful and misguided attempts to criminalize the youth and environmental activists of the country.

“Ms. Disha Ravi is one of the best among us” The Alumni of Mount Carmel College

330 alumni members of the Mount Carmel College have issued a statement of support to Disha Ravi who is an alum of the College. Ms. Ravi was arrested by the Delhi Police on February 14, 2021 and now she is facing charges of sedition against her, reportedly for supporting the ongoing farmers’ movement.

We, the alumni of Mount Carmel College, condemn the arrest of our fellow alum Disha Ravi by the Delhi Police. The blatant targeting of a young woman citizen expressing her support with the nation’s protesting farmers is horrifying and completely unacceptable.

We demand that the Delhi Police release her and the Bangalore police and Karnataka government act to protect the constitutional rights of a woman resident of the state of Karnataka. Ms. Ravi is one of the best among us, fulfilling her duties as a citizen of India, and indeed of the world, through her activism in the field of climate change. As co-founder of Fridays for Future in India, she has coordinated with climate activists across the world to get politicians and corporations to act and undertake measures to prevent the world from getting worse.

Her participation as a young woman of colour in climate change activism has been important in bringing attention to the vulnerabilities faced by marginalised communities in countries of Global South. As we all know, the terrible impact of climate change cannot be ignored as evidenced by the ongoing disaster at Uttarakhand where hundreds of people are believed to be buried dead. It is these kinds of environmental disasters, enabled by the weakening of the provisions of the Environment Impact Assessment, that Ms. Ravi has worked to bring to public attention. Her sense of history is remarkable as she has drawn not only from her personal, familial history of farmer-grandparents and the difficulties they suffered due to the impact of climate change on agricultural practices. She has also drawn her inspiration to protest and lend her voice to farmers’ protests in the country from the greatest of people’s movements in India—the Independence struggle.

Through her work, Disha stands as a model to emulate. Her arrest, we believe, is a way to browbeat young, articulate women—which Mount Carmel College has produced for generations—into silent submission. We unconditionally express support to her and her family in this time of distress and are proud of the work she has undertaken in the field of climate change activism.