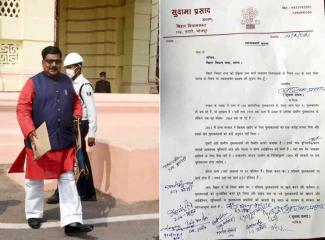 (Text of a letter by Bihar MLAs calling attention of the Bihar Assembly to the state of public libraries in the state, followed by a letter to one of the MLAs, Comrade Sudama Prasad, by a student, responding to his calling-attention motion.)

I hereby give notice for a calling attention motion under the Bihar Vidhan Sabha procedure and rule No. 104 in the conduct of proceedings manual.

Meanwhile, the condition of village libraries is quite appalling. They have a shortage of basic reading and study material, necessary basic infrastructure, and professional and qualified librarians. Indeed, they lack money even for purchase of newspapers. As per Planning Commission directives, there should be one library per 1000 persons.

Kerala State (with a literacy rate of 95%) spends 3% of its Budget on libraries, while in our State this expenditure is 0.01%.

Therefore, we draw the attention of the government through this motion for allotting 3% of Bihar's education budget to libraries, revitalization of the 51 existing libraries, opening new libraries at District and Block levels, and appointment of librarians, cataloguers and library publicists.

-- Sudama Prasad
and other MLAs

I saw a letter of yours which has gone viral on Facebook, in which you have called the attention of the Bihar government to issues related to libraries.

As a student, I am amazed to see this letter. Once in a while we get to hear ruling party and opposition leaders' statements on issues related to education, though there may be no action or decision taken later. But this is the first time in my life that I am seeing a leader discussing the issue of libraries seriously. After reading your letter I was astounded that even in the days when our country had relatively fewer resources compared to today, Bihar had thousands of libraries whereas currently the well-known libraries in Bihar are practically on their death-bed.

Presently I am on a scholarship from the Russian government and am studying Russian Literature and doing research work at the St Petersburg State University. Libraries have been a very important part of my life's journey. Our government schools and colleges in those days used to have libraries. We used to do hours of self- study in the library. I studied for a few months at the Sinha Library in Patna. In fact, it was after I saw some Russian language books in that library that I started learning Russian by myself. We used to prefer libraries to teachers because whereas teachers taught us only their particular subject, we could choose and read books of our choice in the library. Also, many of our friends were from poor families whose homes did not have suitable study place. As such, they used to spend long hours in the Patna University library from where they studied and secured good posts in life.

It is my belief that the more the culture of reading is developed in people, the more progressive they will become, understand their responsibility to society, and become aware of their rights. At the same time this give also strengthen democracy in our country.

I have been in Russia for about two years and have seen many states and various libraries here. I like the libraries here very much and often wish that such libraries existed in our Bihar also. The population of Russia is only slightly more than that of Bihar and Jharkhand put together. Russia had 62,700 public libraries in 1985 and the number of public libraries today is 39,800. People are also using digital libraries these days. In comparison, Bihar-Jharkhand have only 213 (192+21) public libraries. Reference: Raja Ram Mohan Rai Library Foundation, Government of India.

From this we can get an idea how committed our government is towards developing libraries. I have found that as a result of this reading culture not only the middle class in Russia but also the working class and sanitation workers have a deep understanding of literature, culture, society and science. The miserable condition of the government education system and dearth of libraries in Bihar is the reason for the abject lack of education in the working-peasant class due to which they are unable to write or speak against the exploitation to which they are subjected. It is pointless to expect adequate libraries in Bihar government schools when there is a dire shortage even of teachers.

The questions you have raised for the betterment of libraries fills me with enthusiasm. I have full confidence that you will succeed in bringing education and library culture back on track in Bihar, so that progressive consciousness will awaken in the people of our State, youth will understand their responsibility to society and become the voice for marginalized and oppressed people.

Nowadays it is even possible through technology to make e-libraries reach the villages. A revolutionary step can be taken in education by making available e-book readers (like Kindle) to children and youth at low cost. Bihar has an ancient tradition of libraries. The libraries of the ancient Nalanda and Vikramshila Universities were world-famous. My wish is that you are successful in bringing back the culture of learning and libraries in our land.