Protests and Protest Toolkits Are Essential To Democracies 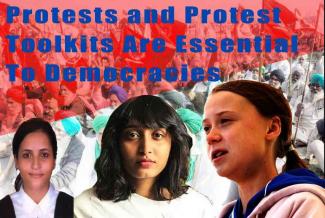 What Is A Toolkit?

A protest “toolkit” is a set of materials a) explaining the key issue succinctly and addressing doubts and misinformation; b) suggesting what an individual person can do to support the cause; c) suggesting reading materials; d) offering drafts for letters to authorities asking them to support the cause or heed the demands of the protest; e) suggesting hashtags and so on for social media campaigns.

The Black Lives Matter (BLM) protests in the US for instance used a toolkit with material about the hashtags, process, and slogans related to the protest. Similar toolkits have been used successfully in the  Occupy Wall Street protest (2011), and the pro-democracy protests in Hong Kong (2019). In fact, many Indian celebrities also tweeted using hashtags in support of Black Lives Matter, following the killing of George Floyd.

Governments and NGOs also use similar toolkits to popularise their campaigns (like Swacch Bharat or Beti Bachao for instance).

What Was In The Greta Thunberg Toolkit?

The toolkit tweeted out by 18-year-old climate change activist Greta Thunberg is the latest pretext for a crackdown by India’s Home Ministry and its Delhi Police on activists like Disha Ravi and Nikita Jacob. According to the Delhi Police, this “toolkit” is sinister and seditious because “The main aim of the toolkit was to create misinformation and disaffection against the lawfully enacted government. The toolkit sought to artificially amplify the fake news and other falsehoods and also sought to precipitate action on 26 January, that is, India’s Republic Day.” They accuse Disha Ravi of conspiring with Khalistani outfits and Greta Thunberg to prepare and disseminate the toolkit. They have invoked the draconian sedition law - Section 124A of the Indian Penal Code – against Ravi. This law defines sedition as an offence committed by whoever “attempts to bring into hatred or contempt, or excites or attempts to excite disaffection towards the government established by law in India”.

What exactly is in the “toolkit” tweeted out by Greta Thunberg?

The toolkit described itself as “a document meant to enable anyone unfamiliar with the ongoing farmers protests in India to better understand the situation and make decisions on how to support the farmers based on their own analysis.”

It offered a background note on India’s agrarian crisis, and explained why farmers in India are protesting the new farm laws. In a section on “Urgent Action”, the toolkit asked people to organise a ‘Twitter storm’ on 4 and 5 February, using hashtags they suggested, share solidarity messages in photo/video format, call/email their local representatives to take action or sign online petitions to “divest from oligopolies like Adani-Ambani”.

The toolkit stressed that global attention on the protests is important for “preventing more State-sponsored violence in India”. In a section entitled “How Can You Help”, the toolkit said:

“On 26 January, a major day of globally coordinated actions, show your support at local physical locations, wherever you are. Either find protests happening in our city/state/country and participate in large (or small) numbers or organise one. In addition to the options below, you are encouraged to organise solidarity protests either at/near Indian embassies, near your local govt. offices or offices of various multinational Adani and Ambani companies. While we are focusing on the 26th, you are encouraged to continue organising gatherings as and when possible — for this is not going to end anytime soon.”

Is The Greta Thunberg Toolkit Illegal?

The toolkit merely suggests social media campaigns peaceful protest demonstrations to support farmers. How can this be illegal, let alone “sedition”, in a democracy? The Modi Government is equating any form of dissent, or protest, with “sedition”.

Moreover, there is no link between the toolkit and the incident involving a small group of protestors at Red Fort during the Tractor Rally on Republic Day. The toolkit makes no mention of any ‘tractor rally’ or ‘diverting route towards the Red Fort’.

The “toolkit” is like any social media post or leaflet creating awareness about an issue, encouraging people to get involved, and suggesting how they can do so.

In Modi’s India, WhatsApp groups and other basic forms of organising protests in support of the anti-CAA movement and the farmers movement, are being outlawed.

Nothing Seditious About It: Former Supreme Court Judge

“Every citizen of this country has a right to oppose the government so long as the opposition is peaceful. I have gone through the documents of the toolkit, and I see that there is nothing in the toolkit which says anything with regard to violence or anything with regard to inciting people. It does support the farmers’ protests. The toolkit is much before the agreement before the farmers’ leaders and the police. I don't see what is seditious about this document. There is the Balwant Singh case, where slogans were raised in Chandigarh – “Khalistan Zindabad” and “Raj Karega Khalsa”, but the Supreme Court held that just raising the slogans did not amount to violence as long as there was no incitement to violence.

“One may or may not agree with the protestors, that is a different matter. But to say that this is sedition is totally not understanding the law.

“The sedition law was framed by the imperialistic, colonialist ruler, the British empire, who wanted to rule over India. Even at that time, the law made sedition a grave crime, punishable with life imprisonment…I was hoping that with our experiences of Bal Gangadhar Tilak and Mahatma Gandhi being sent behind bars for sedition, we would have abrogated this law, or at least toned down this clause. But, unfortunately, this law is being misused.

“I've seen many cases where they (judges) seem to have forgotten that bail not jail is the rule. At this stage, they don't even read the documents. They just see what the police asks them. I know a detailed scrutiny at this stage is not required, but at least they should apply their mind. The police may not have read the Supreme Court judgement, but I would have expected the judge to have at least read it.” - Justice Deepak Gupta, former judge of the Supreme Court to NDTV

It is in fact the manner of Disha Ravi’s arrest that is illegal.

As pointed out by Justice Gupta above, the police and the magistrate violated clear Supreme Court guidelines on use of the sedition law.

The Delhi Police violated the law by barging into Ravi’s home in plainclothes, taking her away on pretext of interrogation, and then bringing her to Delhi without obtaining a “transit remand” after producing her before a Bengalore judge; and by hiding her whereabouts from her lawyer. All these acts flouted a 2020 Delhi High Court division bench ruling on inter-state arrests.

The Delhi judge  who remanded her to five days police custody also violated the “spirit of the law” – failing to ensure that Ravi was legally represented; and failing to do due diligence in enquiring if the sedition law could indeed apply.

“Magistrates must take their duties of Remand seriously and ensure that the mandate of Article 22 of the constitution is scrupulously followed. If the accused was not being represented by counsel at the time of the hearing, the magistrate should have waited till her counsel arrived or in the alternate, provided her with legal aid. Were the case diaries and the arrest memo examined? Did the magistrate ask the Special cell why she was being produced directly from Bangalore without a transit remand from Bangalore courts? If you are a duty magistrate, sitting on a Sunday, you should at best remand for a day, so that the regular court takes up the matter the next day. Duty magistrates should never send an accused to 5 days police custody.”