Skip to main content
Cover Feature 24 February 2021
Why No Action Against Hindu-Supremacist Toolkits and Organised Violence? 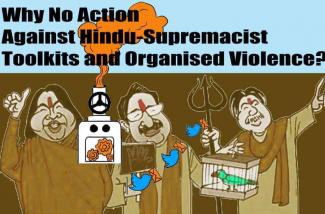 The Newslaundry portal did an investigative story on a “Hindu Ecosystem” group on Telegram formed on November 16 2020 by BJP leader Kapil Mishra, notorious for inciting the February 2020 Delhi violence with his hate-speech, including calls to “shoot the traitors” (“traitors” being code for Muslims and anti-CAA protestors). Two journalists infiltrated the group and studied how it worked. They gathered proof that the group systematically prepared and disseminated materials inciting hatred against Muslim, Christian, and Sikh minorities, amplifying the hatred through toolkits producing automated Twitter storms with divisive hashtags, and spreading fake conspiracy theories designed to poison minds. Mishra recruited members for his hate ecosystem on Twitter – openly. The hate-filled Twitter storms also aired openly, repeatedly. Yet, why did Home Minister Amit Shah’s Delhi Police which filed an FIR based on a tweet by Greta Thunberg sharing a farmers’ protest advocacy document, not act against the vile, violent, dangerous ecosystem?
The Newslaundry report observed:

“A key point that is being made to denounce the Greta toolkit as an “international conspiracy” against India is that it contained dates for when to conduct online and offline activities to draw attention to the farmer protests. The Hindu Ecosystem does the same, but where Greta shared one document to support a legitimate cause, Mishra’s group shares multiple documents a day to increase hate towards different minority communities….

“If you don’t yet fully grasp the gravity of what’s being done through groups such as the Hindu Ecosystem, allow us to spell it out: they are fountains of misinformation, propaganda, directed hatred. They create and spread, in an organised way, Hindu supremacist and anti-minority bile, and incite communal hatred.

“Over 20,000 people are working in a coordinated way to incite communal hatred; it doesn’t matter what event pops up on their radar they quickly give it a hateful spin and turn it into a conspiracy theory, complete with readily shareable images, videos, and forwards to tap into the hate-network effect.”

Kapil Mishra’s is just one of thousands of such hate factories run online and offline by the Sangh outfits. An investigative report by the Article-14 portal exposed direct links between online hate and the February 2020 Delhi violence targeted against Muslims. The story (Shweta Desai, ‘The Hateful Facebook Adventures of Ragini Desai and Friends’) says, “The Delhi police claim there is no evidence Hindu groups allied with India’s ruling party were part of the February riots ‘conspiracy’. Our investigation found widespread evidence of incitement and planning by Hindutva groups on Facebook in the days leading to the riots. The incendiary messages and videos stream on, as Facebook India drags its feet about implementing its own policies.”  In particular, the story focused on videos by one Ragini Tiwari, boasting of having instigated murderous violence against Muslims in Jaffrabad and Maujpur areas of Delhi. The Delhi Police has not taken any action against Tiwari in spite of the ample evidence of her leadership of rioting mobs. Instead, it has booked anti-CAA protestors and feminist activists under the UAPA, claiming that their WhatsApp group supporting non-violent women-led protests against the Citizenship Amendment Act amounted to anti-India conspiracy.

Likewise, the Delhi Police has, a full year after an ABVP mob launched a murderous attack on JNU teachers and students, failed to arrest a single one of them. The mob had been escorted out of JNU by the police after they had completed their violent assault, and the police had not stopped or sought to arrest any of them. When students and investigative journalists exposed the identity of Komal Sharma, an ABVP leader in the act of rioting inside a hostel, Delhi Police looked the other way.