Skip to main content
Cover Feature 24 February 2021
In Modi Regime: Protest Toolkit Is Sedition, But Hate Toolkit Is Not 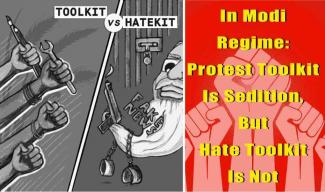 The arrest of Disha Ravi, a 21-year-old activist working for environmental and social justice, is evidence that the Modi regime has all but thrown away democratic pretences and has openly embraced authoritarianism. Disha and other young women are the victims of a Delhi Police witch-hunt because they sought to mobilise domestic and international opinion in favour of India’s farmers protesting Modi’s three pro-corporate farm laws.

The farmers movements – as one of the world’s largest mass movements - gathered much international support. The pretext for the Delhi Police crackdown is a Google document tweeted out by 18-year-old Swedish climate change activist Greta Thunberg. The document in question is a “toolkit” – a very common tool of protests all over the world, explaining the key issues, and suggesting ways in which the global community can support the movement. Simply put: protesting is not a crime, and WhatsApp groups and documents which are tools of organising campaigns, are not crimes. Any regime which equates organising protests with sedition, is not a democracy but a dictatorship.

In the manner of its arrest of Disha Ravi, the Delhi Police violated every rule intended to protect the constitutional rights of citizens. Men in plainclothes took Disha from her home in Bangalore, ostensibly for questioning, and then brought her to Delhi and produced her before a magistrate without informing her family or her lawyers. With no lawyer present to represent her, the magistrate abdicated his duties, failed to provide state-appointed counsel, and instead sent her to five days of police custody.

What needs to be acknowledged and curbed by the same Courts is the Modi regime totalitarian toolkit, which it uses over and over again to curb dissent and people’s movements. In the JNU students’ movement, the Bhima Koregaon case, the anti-CAA protests, and now the farmers’ movement, the Modi regime has deployed the same tools from its totalitarian toolkit. These tools include: using its pet “Godi” media houses to demonise protesters and brand them seditionists; using either planted documents or innocuous tools of organising protests (such as WhatsApp groups, emails, and protest toolkit documents) as a flimsy peg on which to hang a fantastic tale of conspiracy against the state; and then launching a campaign of interrogations, arrests and prolonged incarceration of seasoned, senior activists as well as young student activists; and invoking draconian laws like UAPA under which it is, with the help of some dereliction of duty by Courts, possible to indefinitely jail prisoners without bail or trial.

The Modi regime’s toolkit also contains several tools to suppress facts and retain control of the narrative in the public sphere. First, they cultivate a large, willing tribe of propagandist media actors masquerading as “journalists” and occupying much of the space of electronic and print news media. Then, they deploy sedition and defamation charges against journalists who investigate either the regime or its corporate masters (the cases against the editor of the Wire, and various journalists investigating the death of a farmer protestor who is suspected to have succumbed to police bullets on Republic Day, and the defamation case filed by the Adani corporation against journalist Paranjoy Guha Thakurta are recent instances). The latest instance of open intimidation and assault on the freedom of the press by the Modi regime has been the Enforcement Directorate raid on the offices and the portal Newsclick and the homes of its editors. Newsclick’s editor is a Marxist who, in his student days, was imprisoned during the Emergency imposed by Indira Gandhi. Newsclick is a portal which distinguishes itself by its sterling reportage on people’s movements.

The manner in which the Delhi Police deals with organisers of peaceful, democratic protests is in stark contrast to its approach towards those politicians and organised Hindu-supremacist groups that incite and carry out armed violence against Muslim minorities and critics of the Modi regime. Komal Sharma, the ABVP leader who, last year, led a mob to enter the JNU campus and crack skulls of students and teachers, has not been arrested or charged by the Delhi Police. BJP leader Kapil Mishra, infamous for stoking the Delhi riots last year with his abusive calls to “shoot traitors” was never interrogated, let alone arrested by the Delhi Police. A recent investigation by Newslaundry has revealed that Mishra heads a “Hindu Ecosystem” group which systematically radicalises Hindus by spreading Islamophobic hatred and fabricated content. This group also uses Google documents, to spread conspiracy theories and train its followers to amplify hateful and false messages. If a news portal could infiltrate and investigate this nationwide ecosystem of Hindu-supremacist terror, surely the Delhi Police too is aware of it? Why, then, has the Delhi Police failed to act against Kapil Mishra and his hatekit that actively stokes misinformation and hatred, while it acts against persons who run WhatsApp groups or edit Google documents to support non-violent movements against the Modi regime’s policies?

The police force that answers to India’s Home Minister believes non-violent dissent and protest against the Modi Government is unlawful and seditious, while violent Islamophobia and Hindu-supremacist thuggery is lawful and patriotic. This means that the Modi regime can no longer claim to be a democratic one: it must be counted amongst the world’s bigoted, fascist totalitarian regimes. It is not just the right, but the duty of every Indian citizen to speak up and stand up against this regime with all its might.