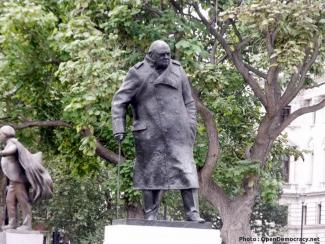 A recent article in the Guardian by the historian William Dalrymple calls for the removal of the statue of Robert Clive, once known as ‘Lord Vulture’ for his crimes in India, which stands outside the Foreign Office. Echoing similar thinking elsewhere in the liberal media Dalrymple opines that ‘…through ‘education and atonement…we can finally begin to face up to what we have done and so begin the process of apologising for the many things we need to apologise for. Only then will we properly be able to move on, free from the heavy baggage of our imperial past’.

But to suggest that the removal of statues can free ‘us’ from ‘our’ past is precisely to forget who is pulling them down already and why. When Black Lives Matter protestors pulled down the statue of Edward Colston, when a black protestor knelt on the neck of the statue for 8 minutes and  46 seconds symbolically recreating the actions of the police officer who murdered George Floyd, when the statue was thrown in the river as so many living breathing black men women and children were thrown overboard and drowned, this was not enabling ‘us’ to move on from, or even ‘come to terms’ with or ‘face up’ to, Britain’s long murderous history of enslavement of people and colonial plunder.  These actions were not about creating a situation where ‘we’ British people (assumed to be white) can be ‘free’ from the past forever, or even as Dalrymple recommends, relegate it to a disturbing, guilt-inducing and cautionary history taught in schools, like that of the Nazis is taught in Germany. On the contrary, these actions are an expression of the knowledge that the violence of racialised imperialism is alive and well, and the resistance to it which has been there from the outset, is entering a new phase.

Just as the pulling down of Confederate statues in the southern US in the midst of protests against police violence is an expression of the continuities between the contemporary racialised police and prison system and racial slavery and is essential to an abolitionist practice for today, the targeting of statues of slave traders and colonial white supremacists in Britain reflects that this wave of protests is connecting the horrors of police racism in North America, the UK and Europe with how the violence of race and white supremacy has been and remains today embedded in global structures of capital accumulation. ‘Race’ – a concept both invented and horrifically real in its effects - and capital were inseparable at their inception and remain so. These protests are about expressing deep pain but also simultaneously about fighting for a different world and this is why they are inspiring others across the world.

Of course it is essential to know -and to teach in schools - that not only cities like Bristol and London, Glasgow and Manchester, but the whole edifice of British capitalism was built upon the profits of slavery and colonialism. And as Guyanese Marxist thinker Walter Rodney’s seminal ‘How Europe Underdeveloped Africa’ explained, it was built on reverse processes of impoverishment, extraction, the destruction of diverse livelihoods, thriving cities - and in some places pre- existing global centres of industrial production - creating unprecedented global inequalities. Colonialism also irrevocably changed relationships among those it colonized, producing new categories of gender, sexualities, class, community, and creating and entrenching the power of the classes who collaborate with imperialism, whom Fanon describes in The Wretched of the Earth.

But we also need to remember, that while the organized resistance of the enslaved (not white abolitionists) ended slavery, and multiple anti-colonial movements and struggles (not just elite-led ‘non-violent’ ones) drove out colonial rulers from Africa and Asia, this edifice of British capitalism continues today to perpetuate itself through racialised processes of plunder, mass death and dehumanizing exploitation, which make up contemporary imperialism. Black Lives Matter protests in Britain connect the lives captured and stolen and thrown overboard by Colston’s men with those drowned in the Mediterranean, with Joy Gardner who was bound and suffocated to death in front of her five-year-old son by those who police the racialised imperial borders.  They connect those millions condemned to mass starvation deaths by Churchill with those burnt in the locked death traps which manufacture garments for global brands, with those whose lands are seized, poisoned and destroyed for corporate profit. They connect the white supremacist plunder of Southern Africa of Cecil Rhodes with the racialised devaluing of African lives by the World Bank which enforces continuing plunder through debt and neoliberal restructuring, by the WTO and the pharmaceutical corporations which denied millions of people in the continent access to HIV treatment, with those who were murdered by corporate callousness three years ago in Grenfell, and those who today are dying disproportionately from Covid-19.

A few on the left are suggesting that statues, and in particular Churchill’s statue which has become such a bone of contention, are somehow a distraction. But it is the fact that protestors who are talking about police murders - and increasingly putting forward the critical structural demand of defunding the police and prisons - are also talking about statues which represent a history which continues to reproduce itself, which makes the significance of this political moment inescapable. Churchill was the knowing perpetrator of the horror of the 1943 Bengal famine, (Clive’s East India Company created the first in 1770, in which 10 million died) but he was also one particularly vile individual actor in an ongoing global system of surplus extraction and accumulation which still ensures that the working people of Eastern India are one disaster away from starvation, as Cyclone Amphan reminded us. The fact that Indian billionaire capitalists have been incorporated into the highest echelons of this system does not make it any less racialised. Newly powerful fascisms like Modi’s Hindutva, which is simultaneously deeply colonial and rooted in its own much longer dehumanizing hierarchy of caste, only embed this racialisation deeper and add new layers to it.

And we cannot shy away from exposing the myth of Churchill on the grounds that he is too well-entrenched as an icon of Britishness – rather we have to confront head on that it is an imperialist, racist scion of the upper class - who also viscerally hated the working class in his own country and was hated in return -  who encapsulates best what British nationalism means today. It cannot be re-appropriated or reframed – it must be replaced by the vibrant anti-racist, anti-imperialist, revolutionary abolitionist solidarities which are growing across the world. The draconian penalties proposed for the agents of history by both the Tories and a Labour Party now freshly embracing its own long imperial past under Keir Starmer only underline why all of us who believe in a different future must stand together and insist: Rhodes Must Fall – Churchill Must Fall- Black Lives Matter!