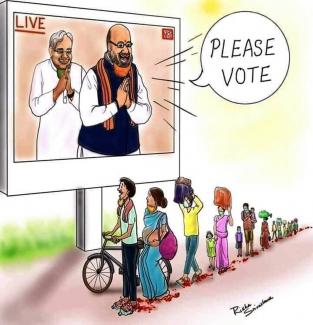 INDIA's Home Minister Amit Shah, who remained invisible for most of India’s prolonged lockdown so far, addressed a digital rally for Bihar on 7 June. Though Shah called it only a ‘Jan Samvad’ or ‘communication with the people’, for all purposes it inaugurated the BJP’s poll campaign for the Assembly elections due later this year. The rally was also part of the Modi government’s mega campaign to celebrate the sixth anniversary of Modi’s prime ministership and pat its own back in the name of what it calls the Modi success story of combating the Covid19 pandemic. While Amit Shah held his virtual rally, Nitish Kumar also launched his campaign on the same day by holding digital interaction with JDU leaders and activists. In other words, both the Union Home Minister and Bihar Chief Minister were addressing the people not in their official capacities but as leaders of their respective parties.

Let us now look at the situation in Bihar. Like all other states in India, Bihar too is reeling under the twin blows of the epidemic and the lockdown. The Covid19 challenge is particularly tough in Bihar because of the crisis-ridden state of the healthcare system in the state, but it is the lockdown which has hit Bihar really hard. Bihar perhaps accounts for the biggest contingent of migrant workers in India and with the central and state governments paying no attention to the plight of the migrant workers, migrant workers from Bihar find themselves left to their own devices – whether walking or cycling back home, or travelling in the scandalous Shramik Specials or, on arrival, being trapped in torture chambers masquerading as quarantine centres. 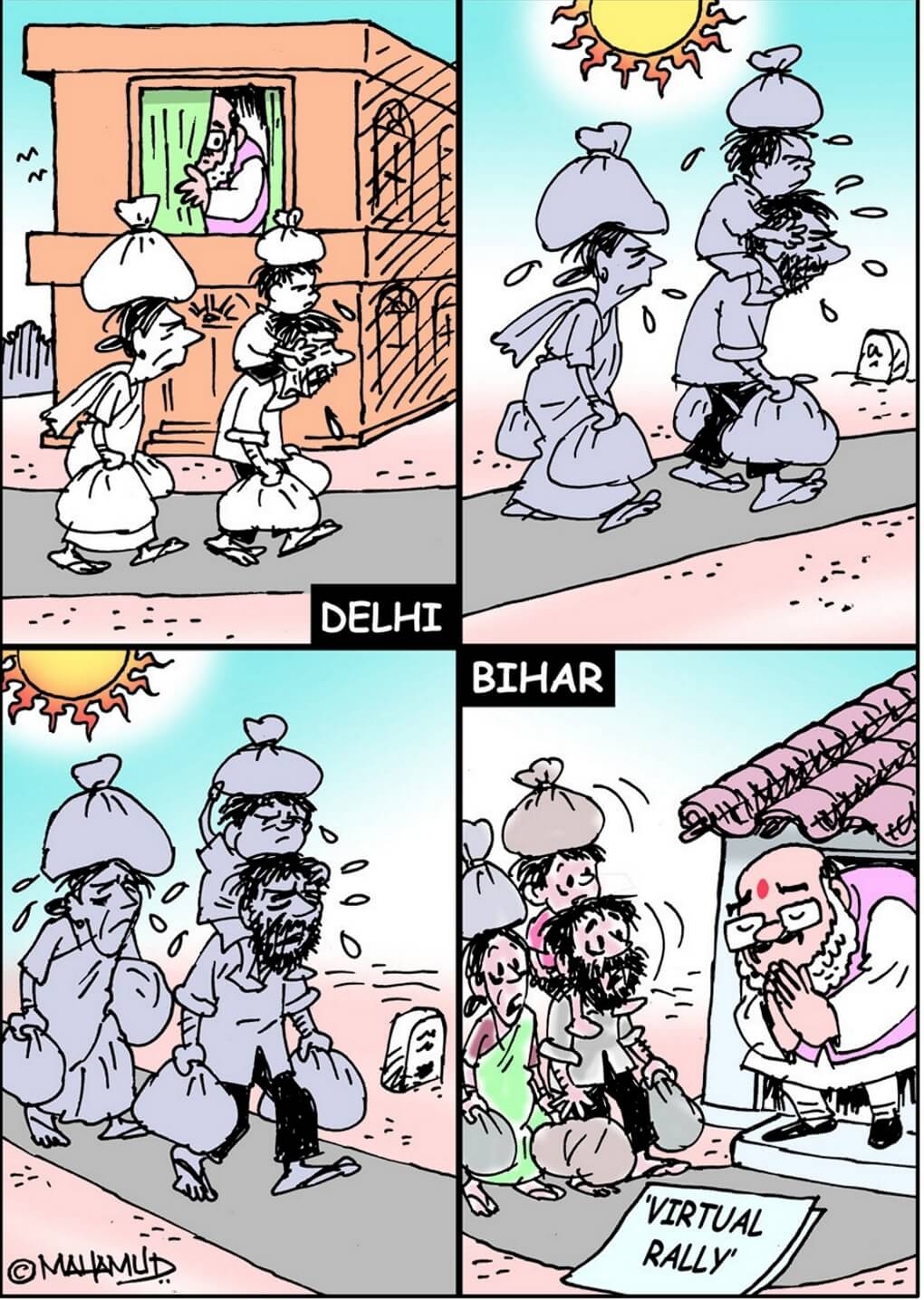 Additionally, Bihar under lockdown is also experiencing a heightened wave of crime against opposition activists, Dalits, Muslims, other oppressed social groups and women, and in most of these reported cases of crime, the feudal-communal-criminal nexus has the active patronage of the ruling BJP-JDU combine. The main accused in the Gopalganj triple murder case is none other than JDU MLA Amarendra Pandey, but instead of arresting him and dismissing him from the Assembly, the Nitish government is busy filing cases against CPI(ML) leaders who visited the massacre site to speak to the local people. In the Madhubani Dalit murder case that followed, BJP leader Arun Kumar Jha is the main accused.

The people of Bihar have been vocal on all these issues all through the period of the lockdown. In fact, the digital rallies of Amit Shah and Nitish Kumar were also greeted with statewide cries of condemnation. Be it the issue of ration and relief for the starving, facilities in quarantine centres, safe return of stranded workers and students, PPE and pandemic pay for scheme workers and Corona warriors, income support for lockdown-hit workers and peasants, and loan waivers for women belonging to self help groups, microfinance schemes and livelihood mission, there have been continuing mass protests within the lockdown restrictions. Bihar has truly turned ‘stay at home’ into a powerful assertion of the spirit of ‘protest from home’.

Predictably enough, Amit Shah and Nitish Kumar remained conspicuously silent about these burning issues that are haunting Bihar. One can see the glee in their faces as they have smelled an opportunity in the crisis. Senior BJP leader and Nitish Kumar’s deputy, Sushil Modi has been hinting for last two weeks that Bihar may have digital elections this time with voters not having to reach polling booths to cast their votes. Amit Shah says DBT has put an end to scams, Sushil Modi says digital polling will put an end to booth capturing as there will be no polling booths! These claims and suggestions are not just utterly untrue, they are thoroughly mischievous and ominous. 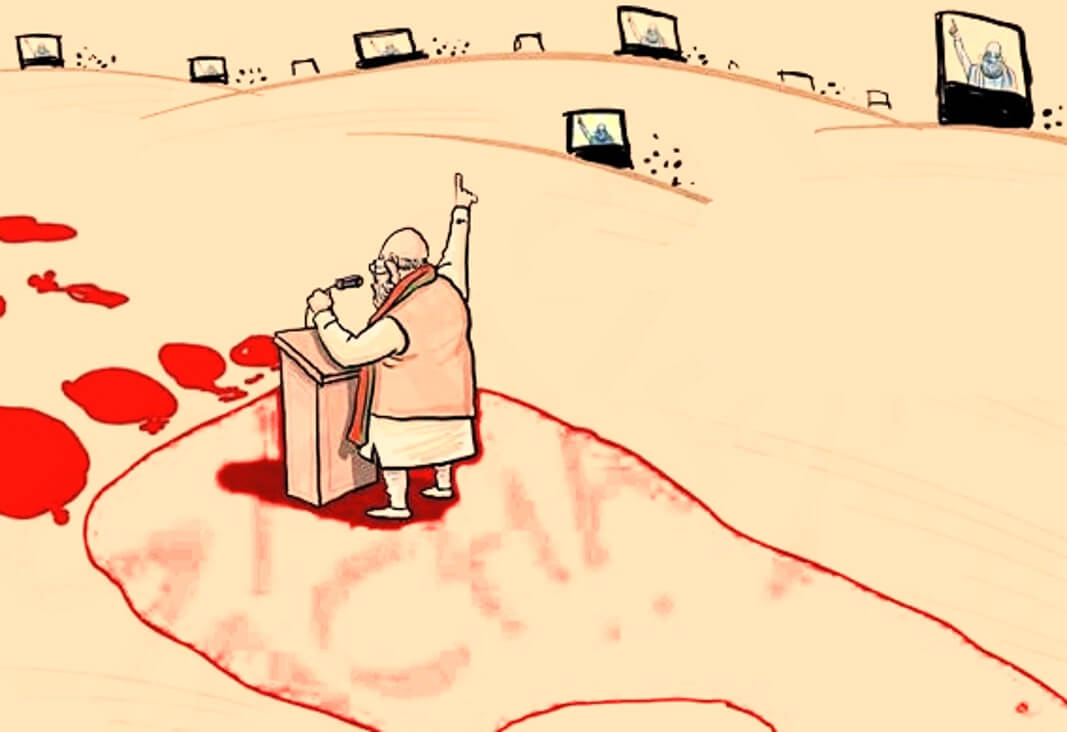 Actually, DBT or direct benefit transfer exists only in budget speeches and election rallies. In real life, now when India is demanding DBT for all common Indian households – monthly cash transfer of Rs 7,500 to all families outside the IT bracket for six months to support income and boost mass consumption and demand has emerged as a key suggestion to combat the present crisis – the government is only promising loans for some enterprises. And scams have not stopped, they have only grown bigger. The Srijan scam has been way bigger than the fodder scam, the difference lies only in smarter scam management! Now we do not have probes, and when inconvenient truths start emerging, whistle blowers and RTI activists are routinely eliminated, cases and judges are swiftly transferred and media is manipulated and headlines managed. The system of EVMs and VVPATs, which according to the BJP stopped booth capturing and other electoral malpractices, has been suffering from a major crisis of credibility and transparency. And now the BJP wants to make the elections even murkier by turning elections into a digital exercise that can only be much less credible and participatory and hence hugely more dubious and undemocratic.

The signals are loud and clear. The forces which used to capture booths and stop the poor from voting till a few decades ago, which hijacked the mandate after the last Assembly elections, are now plotting to steal the elections themselves. The BJP-JDU government in Bihar knows very well that it is up against massive anger of the people over its chronic non-performance and serial acts of betrayal and failure. From Muzaffarpur shelter home rapes and Srijan scam to communal violence and serial killings of Dalits and other activists and brutal repression of popular agitations of various sections of Bihar workers and women, to the ongoing ‘corona war’ on the people, the Nitish-Modi government has been thoroughly exposed as perhaps Bihar’s cruelest and most anti-poor regime.

If the regime thinks it can steal the elections by keeping the people unprepared and excluded, it is the responsibility of Bihar’s irrepressible democratic spirit and glorious legacy of people’s movements to prove the regime wrong.