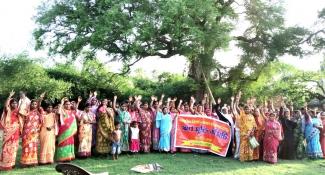 IN 2006 Bangladeshi banker and social entrepreneur Muhammad Yunus got the Nobel Peace Prize for his pioneering role in promoting microcredit and microfinance. He got the award jointly with the Grameen Bank he had founded in October 1983. The idea was to free rural women from the tentacles of usury by giving them small loans and helping them with collective entrepreneurship. Since then Micro Finance Institutions (MFIs) have emerged as a major lending vehicle among rural women across the developing world. And today these MFIs are functioning like a cruel moneylending network trapping women in tentacles of renewed usury. The demand for freedom from debt is therefore fast emerging as the biggest rallying point among indebted rural women. In several pockets of Hooghly district, the demand has turned into a powerful debt cancellation campaign drawing hundreds and thousands of women in demonstrations despite the ongoing lockdown restrictions.

The MFIs provide easy credit to rural women organized as self-help groups. Women usually hand over the credit to men in the families to fund agriculture or small trade, house construction or to meet routine consumption needs or emergency expenses. The MFIs have a very high recovery rate because of collective group pressure, even though the borrowers often to take fresh loans to service their current debts and thus land into a debt trap. 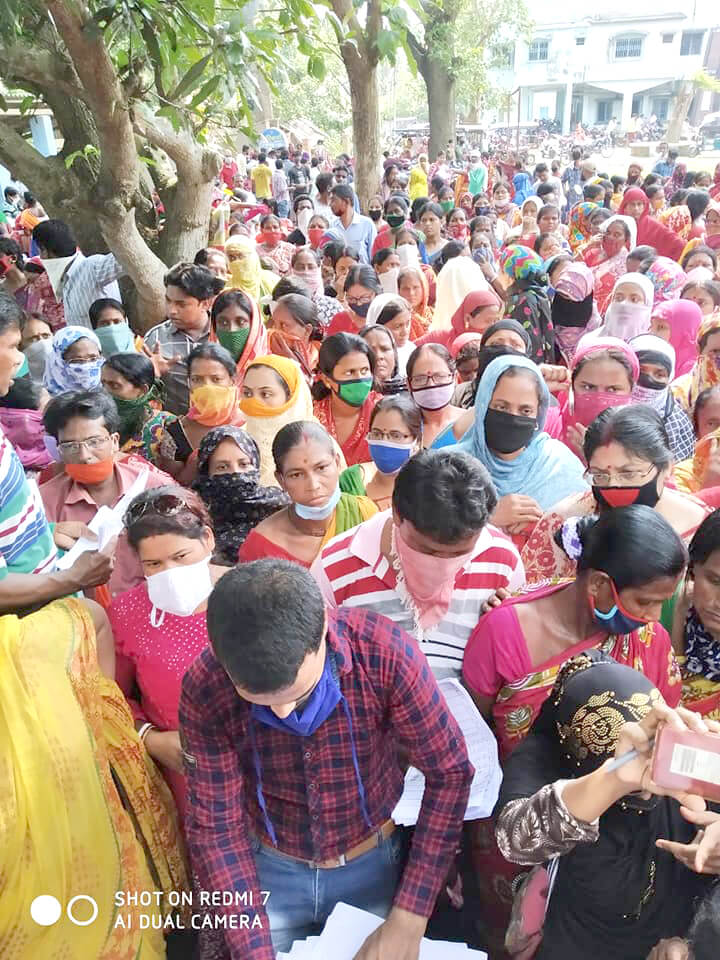 Let us look at a few examples to understand the nature of the problem. Asma Begum of Dadpur has taken a loan of INR 40,000 from Bandhan (the leading MFI in the district) to be repaid in 18 months. She has to pay a monthly instalment of INR 3,024 which works out to a total interest payment of INR14,432 over the principal amount in18 months. She also has to take a mandatory life insurance premium of INR 2,500. The annual interest rate is as high as 24%. Rehana Sultana of Goaljod has loaned INR100,000 from Bandhan. She has to pay INR 1150 every week for two years. Tumpa Patra of Akhna village has taken loans worth INR 30,000 from Ujjivan, INR 30,000 from Samasta, INR 35,000 from Village, INR 18,000 from SKS, INR 40,000 from Bandhan and she has to pay weekly instalments to repay all her loans.

The lockdown has suddenly disrupted this cycle. The incomes from various sources, including remittances from migrant workers working in cities, on the basis of which these MFI borrowers used to pay their weekly or monthly instalments, have all dried up. The Supreme Court did announce a three-month moratorium on payment of EMIs during the lockdown period, but the borrowers will have to apply for it and in many cases they just did not get this information and the MFIs are continuing to coerce them for loan repayment. 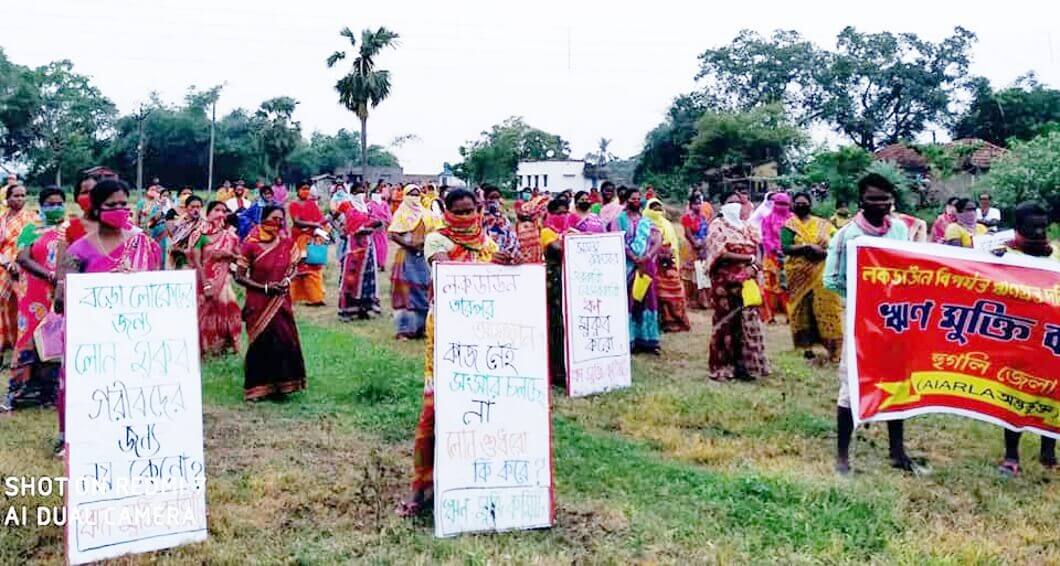 Against this backdrop, the call for freedom from debt or debt cancellation had an electrifying effect on the borrowing women. At the initiative of the All India Agricultural and Rural Labour Association, a debt cancellation committee (DCC) has been formed and it is organizing village level meetings. Keeping the lockdown restrictions and the Covid19 situation in mind, the demonstration in Polba-Dadpur block was supposed to have been attended by only two representatives from every SHG, yet more than 3,000 women turned up in the demonstration. The DCC has asked all borrowers to fill up forms with their loan details and some thirty thousand forms have already been deposited to the committee. A memorandum backed by this data base is being submitted to the finance ministries of state and central governments. Postcards are being sent to the Chief Minister and Prime Minister.

The DCC has come out with three basic arguments in support of the demand for cancellation of debts: (i) with no flow of income, there can be no repayment, (ii) when the government routinely writes off big corporate loans and announces bailout packages for big borrowers, why should microcredit borrowers be treated differently, and (iii) the SHGs have always been prompt and regular in repaying their debts, but since the government announced lockdown has stopped all incomes, the responsibility for loan repayment should also be borne by the government. The movement is spreading like wildfire in the villages of Hooghly. Many peasant households in Hooghly district have also been affected badly by the crop damage caused by Cyclone Amphan. Women from these aggrieved peasant families are joining hands with the MFI-indebted women and a broader unity is being forged through the freedom from debt campaign. 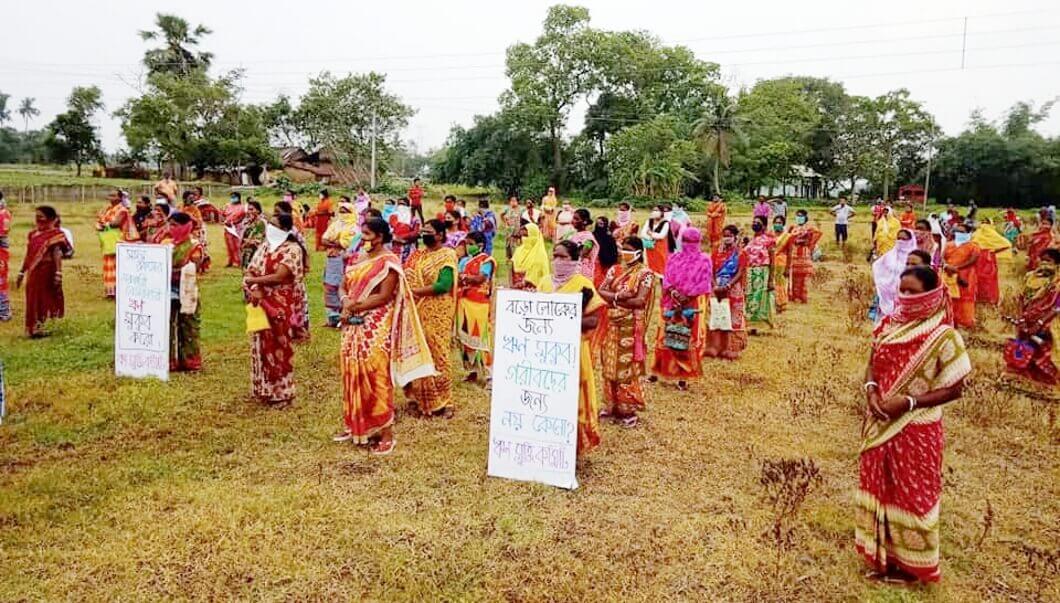