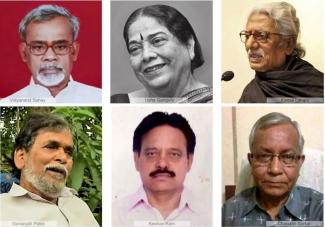 Patra got his degree in chemistry from Ravenshaw College (now University) of Cuttack.  In the late 1960s, he was a college teacher in Parlakhemundi of the undivided Ganjam district (now Gajapati). Parlakhemundi was a centre of the revolutionary peasant uprising that was fast spreading from Naxalbari to Srikakulam. Patra left his job and joined the Srikakulam movement. A close associate of Comrade Nagbhushan Patnaik, he was a Marxist thinker and writer, and tirelessly devoted to movements against land grab in Assam. He was committed to forging unity between the various people’s movements in Assam.

Comrade Patra was a moving force in the Baliapal movement in the 1980s against the establishment of India’s first missile test range in Baliapal and Bhogari blocks of Balasore, (his home district). Comrade Patra was an effective organiser, helping to mobilise thousands including women and children against displacement and environmental devastation. He was also very active in in the anti-liquor and land rights movement in Narayanpatna in Koraput district in the 1990s and 2000s. He was a mentor to the Chasi Mulia Adivasi Sangathan – an organisation of adivasis and farmers resisting land grab that was falsely framed and harassed by the Government and police. After the police firing on protesting adivasis at Narayanpatna police station in 2009 (in which two adivasi youth were killed), Patra was jailed for two and a half years under a slew of charges ranging from the draconian (sedition) to the ridiculous (theft of a cow and a bicycle). He was falsely accused of being associated with the banned Maoist party. He was acquitted and released, but his health suffered as a result of his incarceration.

Comrade Gananath Patra’s courage and conscience will continue to be an inspiration for all democratic and Left mass movements. Red Salute!

Keshav Ram (47) passed away on 4 June in All India Institute of Medical Sciences, Delhi. He was suffering from Covid-19. He has been an office bearer of Delhi's major transport sector union DTC Workers Unity Center and member of CPIML's Transport Sector committee. His contribution in building DTCWUC is unforgettable and he will be remembered always as very hard working and committed comrade. His live association with common DTC workers at the grassroots made him one of the pillars of the Union.

CPIML pays him tribute and condolences to his bereaved family.

Ranjeet Kumar Sarkar (fondly called Chandan da), passed away on 14 June after a long bout with brain cancer. He was 73. An advocate, he was a member of the CPIML’s  Alipurduar district committee in West Bengal. In the early 1990s he left CPIM to join Indian People’s Front, and later joined the CPIML. He remained active in various people’s movements and campaigns right till the end. He contested elections for the West Bengal Assembly from CPIML once.

He is sorely missed and mourned by CPIML comrades as well as by all people’s movements in West Bengal.

CPIML pays tributes to Vidyanand Sahay, well-known progressive cultural personality of Bihar, who passed away in Jamshedpur on 25 June 2020. He was a member of the Bihar State Committee of CPIML in 1996, and remained a member of the party till the end.

Born in a landowning family in Bhojpur, Sahay chose to ally himself with the struggle of dalit and landless poor. Active in his student life, he threw himself into the 1974 movement, later aligning with the Janata Dal and later the Samta Party. He was active in negotiations to secure a seat adjustment between the Samta Party and CPIML in 1995. But when Nitish Kumar, then leader of the Samta Party, went for an alliance with the BJP after the 1995 polls, Sahay immediately cut himself off from the Samta Party, and joined the CPIML. He played an especially vital role in the campaign for justice for the victims of the 1996 Bathani Tola massacre committed by the feudal militia Ranveer Sena.

Stricken by cancer in 1999, he nevertheless continued to remain active in the party. He left Patna for Jamshedpur in 2002, and had lived and worked there ever since.

CPIML pays tribute to the legacy of veteran theatre person Usha Ganguly, who passed away on April 20 at the age of 75.
Born in Rajasthan, and trained as a Bharatanatyam dancer, Usha Ganguly made Kolkata the stage for her life in theatre, helping to nurture Hindi theatre in a city known for its vibrant Bengali theatre.  She is known for the roles she performed as well as the plays she produced. Among her most memorable productions is Rudali, her 1992 Hindi play adapted from Bertolt Brecht’s Mother Courage, where she played the leading role of Himmat Mai. She founded the theatre group Rangakarmee, and wrote several plays, and also translated and adapted a large number of international scripts. She was the only theatre director in India to have directed a play for a Pakistan theatre group called Ajoka Theatre under their Theatre for Peace project.

CPIML pays tribute to Kamal Lohani, the noted Bangladeshi leftist, cultural activist and journalist who succumbed to Covid-19 at the age of 68.

As a student activist in the 1960s, Lohani was active in the movements against the authoritarian Ayub Khan regime of Pakistan. In 1967, he formed Kranti, a leftist cultural organisation. He was jailed several times, sharing jail life with Sheikh Mujibur Rehman and other freedom fighters.

During the Bangladesh Liberation War, Lohani came to Kolkata and worked as a journalist with the Shadhin Bangla Betar Kendra, reporting on the liberation struggle. So it turned out that in December 1971, the people of Bangladesh heard the declaration of their victory in a news bulletin read by Kamal Lohani.