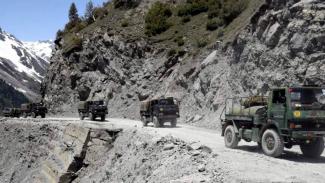 EVEN as India is faced with the enormous public health emergency caused by the Covid19 epidemic and the massive socio-economic crisis triggered and aggravated by the lockdown in force since 25 March, Chinese and Indian troops clashed in the Galwan valley area in the Ladakh sector of China-India LAC on 15/16 June resulting in the death of twenty Indian soldiers including one colonel and reportedly also some unspecified and unconfirmed casualties on the Chinese side.

Reports of a standoff between the two sides have been doing the rounds in the media since early May. On May 5-6, 2020, a face-off between Indian and Chinese troops took place near Pangong Tso lake in which a few soldiers on both sides reportedly received injuries. On 28 May, MEA spokesperson for India invoked existing bilateral mechanisms for India and China to resolve disputes diplomatically. Meanwhile military level talks continued over several rounds on different levels culminating in the June 6 Lt General level talks after which the MEA said “the two sides will continue the military and diplomatic engagements to resolve the situation and to ensure peace and tranquility in the border areas.”

Viewed against this backdrop of continuing talks through military and diplomatic channels to resolve the standoff, the Galwan Valley clash clearly marked a setback to the process. Amidst talks of de-escalation, suddenly we witnessed a major escalation claiming a number of lives. In terms of the historical record, this was the worst incident since 1967 and the first instance of military casualty since 1975. Two days after the clash, the MEA issued its first reaction. Ironically, even as the MEA statement of 18 June blamed China for the clash, it did not admit that Indian soldiers had been taken into Chinese custody, and the people of India came to know about it only when China released ten Indian soldiers including four officers the same day.

If this was not shocking enough, what followed has been truly inexplicable. The MEA statement said that the clash had taken place on the Indian side of the LAC where China was trying to erect a structure, but only the next day Prime Minister Modi told the ‘all party meeting’ point blank that there was no incursion or intrusion and no loss of land or post. His statement was so clear and blunt that there was no question of misunderstanding it, but next day the PMO issued a long clarification while  removing that clear denial from his video address. Meanwhile, China is using Modi's video in a big way to substantiate its own position and has staked its claim over the entire Galwan valley even though military analysts say the area has been largely under Indian control since 1962. There has been no specific official rebuttal of the Chinese claim yet from the Indian government.

While the official statements coming from the government of India, including Narendra Modi himself, appear uncharacteristically muted, especially when contrasted with Modi’s aggressive rhetoric in 2013-14 in the run-up to his 2014 victory or the Modi government’s loud ‘surgical strike’ posturing against Pakistan, and in fact suggest a virtual acquiescence to the Chinese claims, the Sangh-BJP brigade is making up for it with their jingoistic hyperbole and virulent propaganda, much of which is directed against the opposition and especially the Left in India. The Sangh-BJP campaign revolves around three big mischievous and false planks: (i) hypocritically targeting small traders and common consumers for selling and buying Chinese products (when all through the Modi era India's economic dependence on China has kept growing with China emerging as India's number one trading partner and Indian big corporates forging close ties with Chinese companies and Chinese capital), (ii) accusing the opposition of being pro-China to silence every inconvenient question that the government cannot answer, (iii) making false claims of military-diplomatic strength and success when in real life we are seen to be paying such a high price.

While the regime remains silent about the actual state of affairs on the LAC front, it has also started peddling a new narrative about the role of the Indian Army. Modi claims to have given a free hand to the Army and a well-known anchor of a leading channel said the government should not be questioned for any lapses on the part of the Army which is entrusted with the job of patrolling along the LAC. This is so different from the Pulwama-Balakot phase when Modi was busy claiming all credit and hogging the  limelight all along. Is it to insulate the political leadership and blame the Army for any setback and adverse development?

The other sinister angle emerged when Modi asked every Bihari to be proud of the gallantry of the Bihar Regiment. The soldiers who fought hand-to-hand combat with the Chinese troops belonged to the 16th Battalion of Bihar Regiment, but the regiment comprises soldiers from all over India. Of the twenty fallen soldiers from this regiment, as many as fifteen were from other states. It is not difficult to understand why Modi, whose government is otherwise busy undermining federalism in every possible way, is projecting the Indian Army through the prism of regionalism. Bihar is going to the polls later this year.

With so many unanswered questions about the Galwan valley clash still awaiting clear and credible answers, the two sides have gone back to the negotiating table to resolve the standoff through talks. Any war between two nuclear powered countries in the middle of a pandemic and major economic crisis can only be a recipe for disaster. It must be ensured that the clash does not lead to a war and all issues are sorted out through negotiations. The border dispute cannot have a military solution, it can only be resolved diplomatically. And while the two countries address the issues through diplomatic negotiations, the Modi government must issue a White Paper on the Pangong Tso and Galwan valley stand-offs to take the Indian people into confidence about the real state of affairs.

Any conflict between China and India is also bound to have major global ramifications. A key difference between the earlier phase of China-India tension and the present phase comes from the shift in Indian foreign policy from the non-alignment era to the current phase of growing strategic identification and integration with the US and Israel. India’s own tension or conflict with China thus gets subsumed in America’s global design of targeting China and this can only aggravate bilateral tension between India and China. Trump never misses an opportunity to offer to mediate between India and China. Even as the Modi government drags India deep into the US-Israel nexus, India stands badly isolated from almost all neighbouring countries. Friendly relations with neighbours are a prerequisite for making our borders secure and peaceful. Clearly, Indian foreign policy needs a major course correction. Peace and cooperation with all neighbours must be the basic objective and foundation of our foreign policy to enable India to play a more effective role in the international arena.