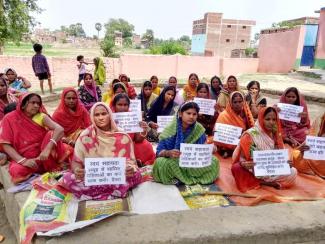 RURAL society in Bihar has seen a big change in recent times, and rural women have an important role in this change. ASHA workers, Rasoiyas, Anganwadi Sevikas-Sahayikas, Jeevikas and other sec-tions of working women have changed the structure of rural life. Earlier, they used to have no work other than work in the fields, but now they are engaged in other work also. Their organizations and movements are mostly led by Left organizations, but unfortunately the Jeevika SHG has only a single organization and that is the BJP-run BMS. According to one estimate, more than 3 crore women in Bihar are associated with SHGs. JDU had made a strong place for itself amongst rural women through the SHG Jeevika.

Women working in SHGs face many kinds of problems just like ASHAs and Rasoiyas, and the lockdown has further worsened their situation. It is said that micro-finance companies and private banks help to strengthen rural economy but the lockdown has exposed the shallowness of these claims. Group loans given by these private companies are not making rural women self-reliant; on the contrary, they are now caught in a new kind of debt-trap in addition to the moneylender’s trap. There are reports from several villages in West Champaran to show that whatever little the migrant workers were able to bring back home has also been plundered by these companies.

The Corona relief package announced by the Central government is nothing but a cruel joke on women working with SHGs. They have got no exemptions; they have only been given a one-year time period during which they need not pay loan installments. But given the terrible crisis caused by the Lockdown, how can these women repay the loans after one year? Clearly, the noose around their neck is being further tightened. The Bihar government had announced that they would give each family 4 masks. The work of making these masks should have been given to the SHGs but all SHGs did not get this work. Even those who got the work find that their masks are not being procured. The masks are purchased at Rs 9 per piece but the Mukhiya, in cahoots with the administration, prepares a bill for Rs 20. If this kind of employment was genuinely given to the women, their condition would have improved a little. 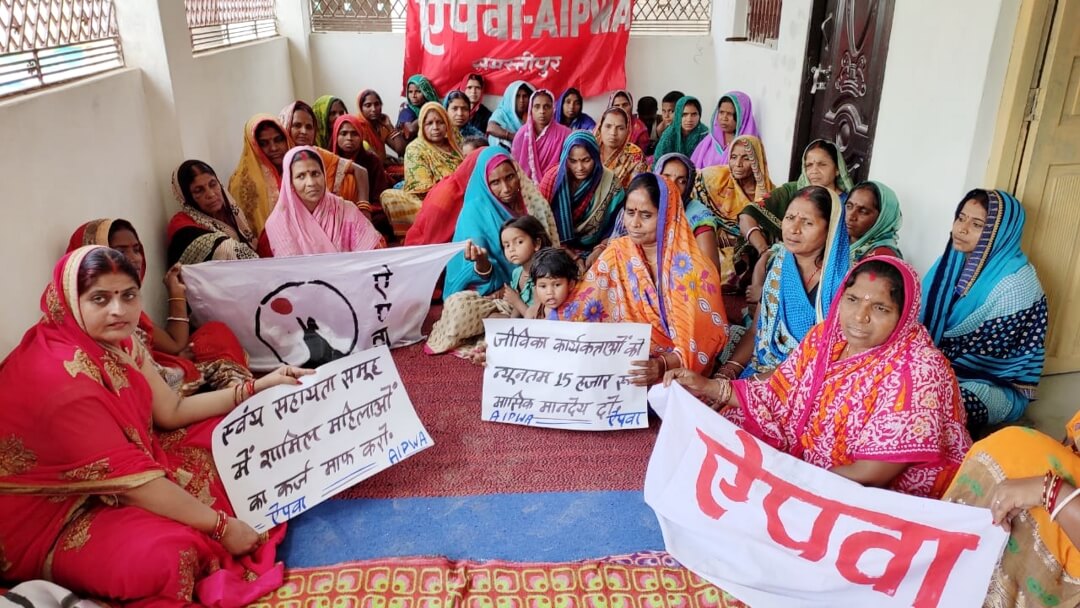 Keeping loan waivers as the central point, the Swayam Sahayata Samooh Sangharsh Samiti affiliated to AIPWA is organising SHG women in Bihar. On 29 May countrywide protests were organized for a 6 point charter of demands: loan waivers including micro-finance company loans; each SHG or clusters of SHGs should be given employment according to their skills; the government should ensure procurement of products made by SHGs; interest free loans for SHGs; Rs 15000 per month for Jeevika workers.

Women working in SHGs gave extensive support to this call and participated in the protests at Pat-na, Bhagalpur, Jamui, Eastern Champaran, Siwan, Muzaffarpur, Gopalganj, Bhojpur, Katihar and many other Districts. A rural convention was also organised in East Champaran on the day of the protest. Protests were also held at 92 places in Patna, 27 places in Jamui, 11 places in Nawada, 28 places in West Champaran, 25 places in Muzaffarpur, 45 villages in 12 Blocks in Bhojpur, and 20 places in Arwal. Protests were also held at Gaya city and many rural parts of the district.

After the program on 29 May, Panchayat level meetings were organized between 5 and 15 June in hundreds of villages to form Sangharsh Samitis at Panchayat, Block and District levels. A convention was also organized at Dhanrua on 18 June for loan waivers. 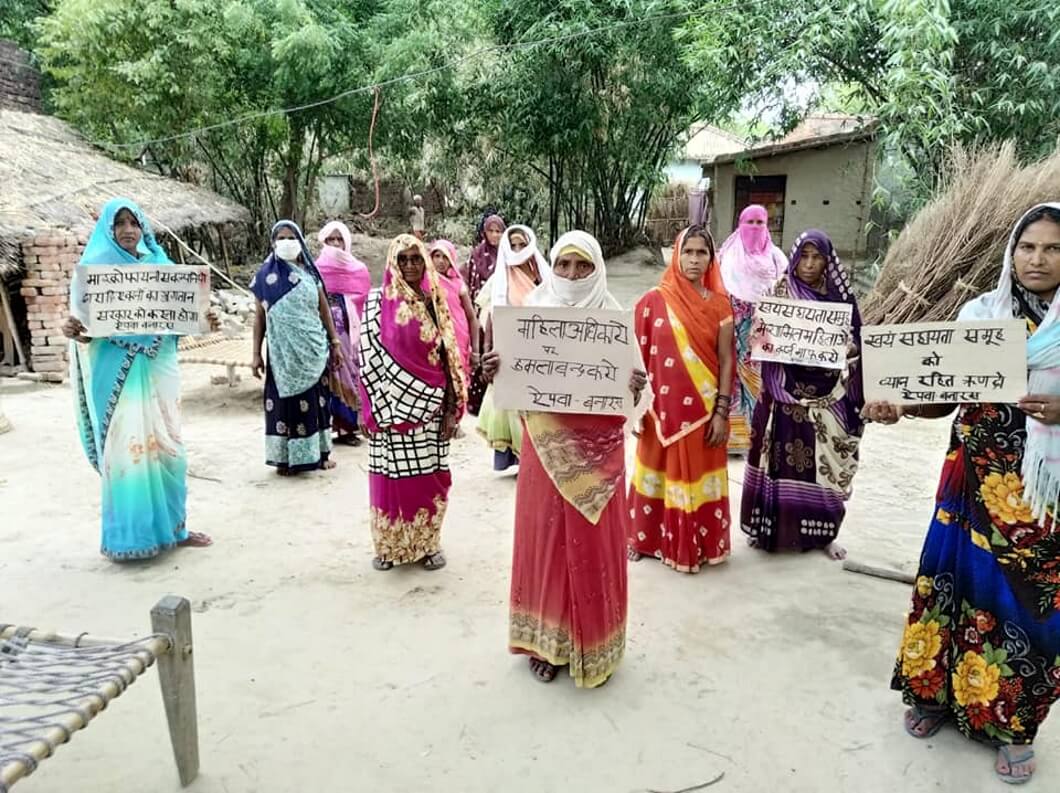 Case Study of a Village

More than 900 families live in Behra village in Sikta Block of West Champaran District. Women from about 400 of the poorest of these families have taken group loans from micro-finance companies and private banks amounting to Rs 3 crore 29 lakhs. But nobody has been able to make a livelihood through these loan amounts so far. The money got spent for essential home expenses in times of need. If there had been no Lockdown, more than Rs 60 lakhs would have had to be paid to private companies as installments during these 3 months. These companies have now come knocking on doors to demand the money. The burden of debt is constantly growing. The families have no income. Family members who are migrant workers and could have helped repay the loans, are no longer in a position to do so because of the lockdown. In order to repay the loans, many women are forced to join with women of other groups and borrow from other banks and companies. Thus women from 400 families have joined with many groups and have taken loans equaling the number of 1079 women and are constantly laden with the pressure of debt as a result. In Behra village alone, there are 10 micro-finance companies to whom the village owes Rs 3 crore 29 lakhs. These companies loan the money at an average interest of 11% to 14%, but as they go on they actually collect an interest of up to 36% (that is, Rs 3 per month as interest on Rs 100). After strong protests by the village women, the bank personnel are now not coming home to demand the money, but they have filed a case against women associated with the SHGs. 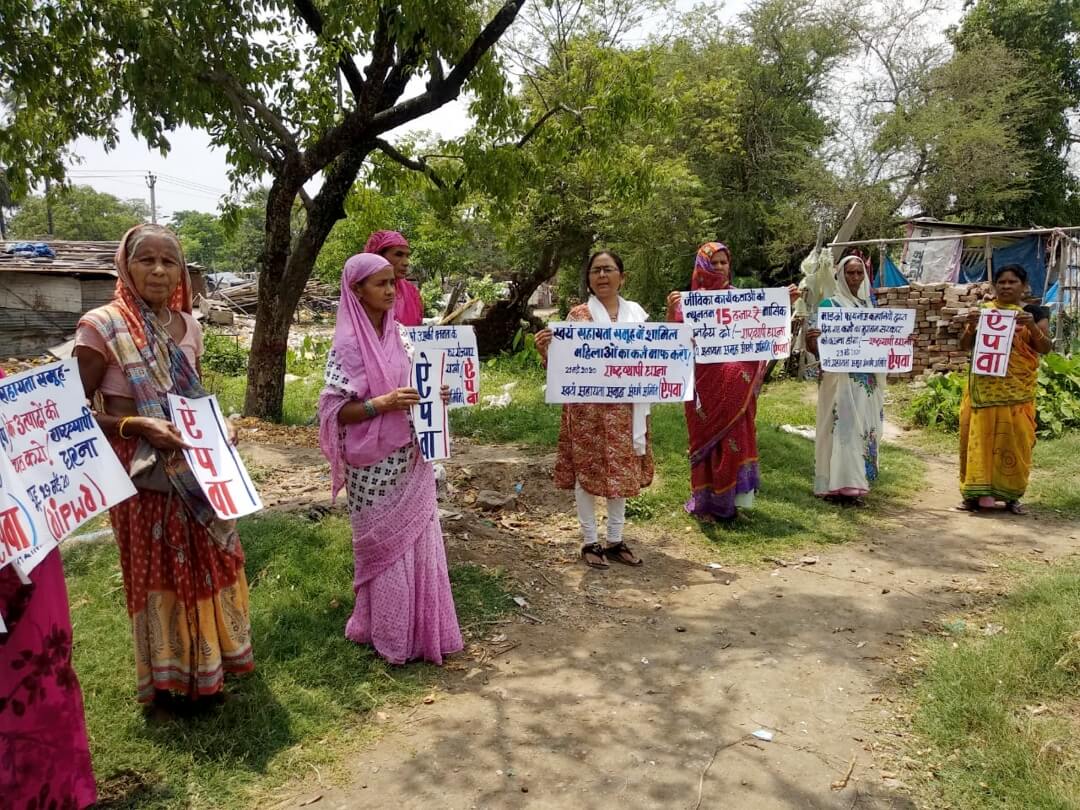 At one time the people of the village were bowed down by private usurers’ debts. In addition, to-day they are burdened with company debts which are nothing more than modern time legalized usury. Things have come to such a pass that sometimes if one member of a group is unable to repay the loan, the other members of the group come to their home to force the debt ridden members sell their household belongings. Bank personnel threaten women who are unable to repay loans with lawsuits and cases, black listing of Aadhaar card and bank accounts, and banning all government benefits and subsidies.

Thus, it is a very important task to ensure that SHG women are saved from the debt-trap of micro-finance companies. The issue of loan waivers for them is a very just demand raised by AIPWA and the Sangharsh Samiti. In addition, serious consideration must be given for the employment and livelihood of these women. If the women fail to start a means of livelihood with the loan money or if the government fails to guarantee procurement of the products made by the women, the loan money will be spent for day to day household expenses and they will never be able to come out of the debt-trap.