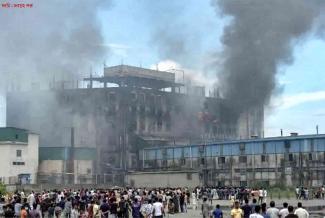 Bangladesh’s economic growth has been branded a miracle in South Asia, growing from one of the poorest countries in the world to one of the fastest developing economies comparable to the ‘Asian Tigers’. Recently the per-capita income of Bangladesh surpassed that of India. Much of this growth has been driven by export in garments. However much of the working class has been deprived off the benefits of its own labour as the recent factory fire in Narayanganj demonstrated.

At least 52 children have perished in a fire at the Hashem Food Factory triggering memories of the deadly Rana plaza collapse in 2013. The factory is alleged to have employed children at least as young as 14-years-old. Locals have further alleged that the factory had used padlocks on the floors, which prevented the children from escaping the floor when the fire broke out. A dozen children jumped from the second and third floors to escape the fire suffering grievous injuries in the process. An appalling lack of fire safety measures is the clear reason for the death of these children. The owners of the factory were however granted bail by the district court of Narayanganj.

The economic ‘success’ in Bangladesh is being built upon the corpses of workers, who are forced to work in hazardous conditions. The Awami government has suppressed the voice of civil society and workers alike by unleashing violent repressive machinery. The children at the Hashem Food Factory will no doubt be cast aside as ‘collateral damage’ in the story of economic growth in Bangladesh.