Skip to main content
Editorial 25 July 2021
The Call of August 2021: Freedom from Tyranny, Freedom from Devastation 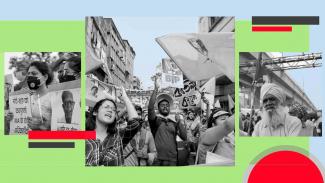 On August 15, 2021 India will enter the seventy-fifth year of independence from British rule. Ironically, far from celebrating the gains of independence, today Indians are increasingly being reminded of the cruelty and coercion of the colonial era as the country reels under the combined offensive of Covid 2.0 and Modi 2.0. In fact, it was none other than CJI NV Ramana who recently had to ask the Union Government why it still needed the Sedition Law of the colonial rulers even after all these years. The Sedition Law, or Section 124 A of the IPC, is however no isolated example of a colonial law that the British rulers used to suppress India’s freedom fighters being invoked by the current rulers to silence critical dissenting voices.

More than laws, it is the cruel nature of contemporary governance, the attitude of India’s current rulers towards citizens who are increasingly being treated as dispensable subjects, that is today reigniting the colonial comparison. The UAPA law, which has a post-colonial chronology, would perhaps put even the colonial era to shame. An octogenarian priest and human rights activist who spent the best part of his life fighting for Adivasi rights in Jharkhand, against displacement and for dignity, for release of prisoners languishing for years in jails without basic amenities and rights, was displaced from Jharkhand to Maharashtra and made to die in jail. The Parkinson’s afflicted Father Stan Swamy was even denied for days the use of a sipper and a straw to drink water and his last wish of spending his last days in Ranchi amidst familiar faces was repeatedly rejected. It was one of his bail hearings that was greeted with the news of his death.

The case of Father Stan Swamy is again not an isolated example, but illustrates only a larger pattern. He was one among the sixteen detainees arrested in the thoroughly fabricated Bhima-Koregaon case, and there are several such ‘conspiracy’ cases being built up against rights activists and dissenting citizens, the ‘Delhi riots case’ in which Natasha, Devangana and Asif recently got bail from the Delhi High Court, but a number of others continue to languish in jail being another particularly brazen one. Each of these fabricated conspiracy cases remind us of the cases the British rulers built up to persecute Indian freedom fighters. And while the British rulers had to rely primarily on draconian laws and repressive measures, the Modi government has also got its most sinister surveillance arsenal to snoop and plant electronic evidence at will.

We now know that an Israeli company has been selling cyber-surveillance spyware in the name of combatting terrorism and crime (it openly admits to selling to ‘vetted’ governments) and more than 50,000 phones are already being targeted globally. The list in India revealed so far includes opposition leaders and election strategists, investigative journalists and human rights activists (among them Father Stan Swamy), an election commissioner (Ashok Lavasa, who had found Modi guilty of model code violation in the 2019 elections), family members of the woman who lodged a sexual harassment complaint against former CJI Ranjan Gogoi, and even sitting judges and Modi’s own ministers. It clearly gives us an idea of the kind of super-invasive surveillance and blackmail on which the Modi-Shah regime has built up its architecture of statecraft.

While the entire repressive apparatus of police, prisons and spying technology is being directed against journalists and activists, and activism is being equated with terrorism, terrorists who lead hateful and violently anti-Muslim mobs are given a free pass. A week before Independence Day, a mob of 5000 Hindutva supremacists led by BJP leader Ashwini Upadhyay gathered at Parliament Street in India’s national capital shouting calls to slaughter Muslims. The gathering demanded that “foreign” laws be replaced with Indian ones. But by “foreign laws” the RSS, fountainhead of Hindutva supremacist mobs like this one, has never opposed colonial-era laws like sedition, UAPA or AFSPA. Rather, the RSS has always declared the Constitution of India to be “inspired by Western secularism and democracy”, and has wanted it replaced by the Manusmriti – the document of slavery for women and oppressed castes.

And then we have the reality check inflicted by the Covid19 pandemic, especially the lethal second wave in which the whole world saw Indians die of oxygen shortages and corpses floating in the Ganges and being buried and burnt en masse without any dignity. Now the government tells Parliament that nobody has died for lack of oxygen in India. From testing and treating people to counting the dead, we only see a shocking disregard for human life. The message that the super-arrogant and super-callous regime is constantly sending out is that it is least bothered and could not care less. True to Modi’s dictum of discovering opportunity in disaster, the government is treating the pandemic only as a series of opportunities to promote corporate profit and plunder and rob the people of their resources and rights, and even lives.

In 1947 India had emerged with a dream of a modern democratic republic and the goal of a welfare state. Today India has turned into an elected autocracy and Indians are living the nightmare of tyranny. A second freedom movement is the urgent call of the hour: freedom from tyranny, freedom from state-sponsored disaster and devastation, freedom from fascism.