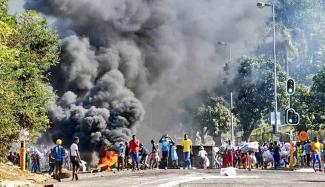 The arrest of former President Jacob Zuma on the charges of corruption has resulted in a wave of violence and unrest in South Africa. What is even more concerning is the fact that the violence has resulted in increased ethnic tensions in a country where apartheid was ended less than 30 years ago. This has led to divisions regarding the fundamental cause of the violence as well as what responses should be given to it.

Jacob Zuma, who served as the president of South Africa between 2009 and 2018, was a widely divisive figure. He had already faced multiple charges of corruption by the time of his presidency and was even accused of rape. The most significant charge of corruption against Zuma seems to be in his dealing with the Gupta family. The Guptas, who migrated from Saharanpur in Uttar Pradesh to South Africa in 1993, were accused of running a ‘shadow government’ during his rule . It was also revealed that the Guptas had run an extensive disinformation campaign in order to deflect the focus on their engagement with the government and stir up ethnic tensions .

Zuma was removed from the post of president by his party, and Cyril Ramaphosa was elected to replace him. Soon after his removal, the Zondo Commission was established to investigate the corruption allegations against Zuma and specifically the charges of ‘state capture’, i.e. that Zuma had effectively allowed the Guptas to run the state. Zuma accused the commission of conspiracy against himself and hinted that foreign forces were involved in the conspiracy. Subsequently he refused to appear on testimonies for which the court sentenced him to 15 months in prison. This has since led to violence all over South Africa mainly unleashed by the supporters of Zuma.

The violence has left over a hundred people dead with more than 3000 arrests. The South African government has deployed 10,000 soldiers on the street and has sanctioned a further 25,000 reservists to be deployed if necessary . The provinces of KwaZulu-Natal and Gauteng have been the worst hit by the protests as en-masse looting of stores and homes resulted in insecurity in various communities. In many places the task of ‘community defence’ has been taken up by self-organized militias in white, Indian and coloured communities. This has resulted in further acts of vigilante violence where these militias have been involved in the shooting of those whom they have suspected of being looters.

Mohammed Jameel Abdulla points out that there are systemic roots to the violence . He points out that “Impoverished communities with limited prospects, rejoice as they leave megastores with stolen food and essential resources”. South Africa is the country with the highest levels of inequality in the world, with a Gini coefficient of 63 . In many South African cities the wealthiest and the poorest communities are often separated by a single street or a fence. Any violence must be seen through the lens of the effects of this inequality, further compounded by the economic crisis imposed by the COVID19 crisis. Ayanda Kota points out that the high levels of corruption and inequality are facilitated by the country’s apartheid past .

Heavy deployment of military and law enforcement as proposed by the ANC leadership cannot provide solutions to systemic problems of material inequality. What is clear is that South Africa is deeply requires redistributive justice for the violence to come to an end. The sooner such reforms are enacted by the Ramaphosa government, the faster South Africa can start the process of healing from the wounds of apartheid.