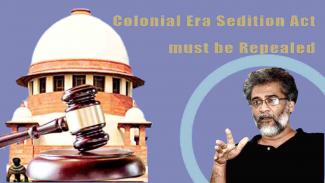 Agreeing to examine the pleas filed by Editors Guild of India and Major-General S.G. Vombatkere (Retd), challenging the constitutionality of section 124A (sedition) in the IPC, a bench headed by Chief Justice N V Ramana posed strongly worded questions in open court to the Central Government.

The plea, contending that the sedition law “is wholly unconstitutional and should be unequivocally and unambiguously struck down”, argued that “a statute criminalising expression based on unconstitutionally vague definitions of ‘disaffection towards Government’ etc. is an unreasonable restriction on the fundamental right to free expression guaranteed under Article 19(1)(a) and causes constitutionally impermissible ‘Chilling Effect’ on speech.”

In response the SC bench observed:

“Mr Attorney (General). We want to ask some questions. This is the colonial era law and the same law was used by the British to suppress freedom movement. It was used by British to silence Mahatma Gandhi, Gokhale and others. Is it still necessary to keep this in statute even after 75 years of independence? We do not know why the government is not taking a decision. Your government has been getting rid of stale laws.

“If we go see history of charging of this section, the enormous power of this section can be compared to a carpenter being given a saw to make an item, uses it to cut the entire forest instead of a tree. That's the effect of this provision.

“We not blaming any state or government for misuse of the provision but unfortunately, the executing agency and particularly the authorities misuse it. Take example of 66A which was struck down but people were arrested. There is misuse of these provisions, but there is no accountability!

“The situation is so grim that if some State or a particular party doesn't want to hear a voice, they will use this law to implicate such groups of people.”