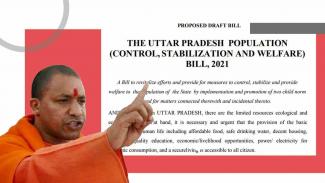 (Text of a memorandum submitted by women’s groups including AIDWA, AIPWA, and NFIW to the President of India on the UP Population Bill)

We, the undersigned women, women's organisations, health networks, academics, health and legal rights activists, and concerned individuals, express our dismay, concern, and protest at the proposed Draft Uttar Pradesh (UP) Population Control, Stabilisation and Welfare Bill, 2021, which forms part of its Population Policy 2021-2030. The Draft Bill was made public on 11 July 2021.

At the outset, we would like to state that the proposed Bill is a violation of Reproductive Health and Rights, which are considered basic human rights of women. These rights have been well defined and duly recognised within varied International Human Rights Commitments that India is a signatory to, as well as the national policy level processes in the country to advance India’s compliance to reproductive rights of women.

Reproductive Rights are well defined in the 1994 International Conference on Population and Development’s (ICPD) Programme of Action (POA) in Cairo- declaration was adopted by 179 countries including India.

As per paragraph 7.1 in Programme of Action, reproductive rights are defined as a state of complete physical, mental and social well-being and not merely the absence of disease or infirmity, in all matters relating to the reproductive system and to its functions and processes. Reproductive health therefore implies that people are able to have a satisfying and safe sex life and that they have the capability to reproduce and the freedom to decide if, when and how often to do so.

This approach was further reflected in the National Population Policy 2000 adopted by India under Prime Minister Vajpayee, which committed the government to a target-free approach based on informed and voluntary choice of citizens. It is well understood since then how ‘two-child norm’ or any such restrictive policies are coercive in nature and work against the development agendas and goals set for the nation to achieve both nationally and internationally. The UP government, with a complete lack of understanding of this, takes us a step back by proposing this rejected, anti-development, anti-women, and coercive approach in the form of the proposed Bill.

This Bill is also in violation of the Declaration adopted at the conclusion of a colloquium on population policy, organised by the National Human Rights Commission (NHRC), the Ministry of Health and Family Welfare (MoHFW), and the United Nations Population Fund (UNFPA) (2003) . The Declaration explicitly recognised the two-child norm as a violation of human rights-

“Population policies framed by some State Governments reflect in certain respects a coercive approach through [the] use of incentives and disincentives, and are violative of human rights. The violation of human rights affects, in particular, the marginalised and vulnerable sections of society, including women; [and] the propagation of a two-child norm and [the] coercion or manipulation of individual fertility decisions through the use of incentives and disincentives violate the principle of voluntary informed choice and the human rights of the people, particularly the rights of the child.”

As recently as December 2020, in an ongoing petition in the Supreme Court, the Ministry of Health and Family Welfare (MoHFW) stated in its Affidavit (in response to a petition) that "the Ministry will not implement a mandatory two-child policy by denying government jobs and subsidies and has reportedly remarked in its that Programme of Action of the International Conference on Population and Development 1994 (ICPD) to which India is a signatory, is unequivocally against coercion.  The MoHFW pointed out that there is a decline in India's total fertility rate as per NFHS 4."

Evidence in the past has clearly shown how such a norm is discriminatory and threatens people’s civic-political rights to participate in electoral democracy. It also poses tremendous barriers to accessing reproductive health information, care, and the benefits of social welfare particularly for women. Some states, after implementing such a policy, have also withdrawn the ‘two-child norm’ such as Madhya Pradesh (MP) in 2004. Over the past several years, many of us have strongly opposed the two-child norm policy that continues to be implemented in several states. Many studies on the two- child norm in the past highlighted that any enforcement of the two-child norm on Panchayat representatives had encouraged sex selection, increase discrimination against the girl child, and worsened the already declining sex ratio, given the strong son-preference in the society. It begs the obvious question as to why are we proposing a law despite of the proven worse outcomes for women, children and marginalised communities; instead of taking learning from this policy led mistakes in the past.

The ICPD Programme of Action (POA) had clearly stated in 1994 itself that "Over the past century, many Governments have experimented with such schemes, including specific incentives and disincentives, in order to lower or raise fertility. Most such schemes have had only marginal impact on fertility and in some cases have been counterproductive. Governmental goals for family planning should be defined in terms of unmet needs for information and services”.

It is critical to understand that the recent references to “population explosion” and the need to ‘‘control” completely ignore the robust evidence that the total fertility rate (TFR) in the country is already down to 2.2 in 2015-16, marginally above the 2.1 replacement rate in almost 24 States. The Desired Fertility Rate is 1.8, which also indicates that women in India prefer to have no more than two children. Further, the Census data also showed that the decadal growth rate during 2001-2011 had reduced to 17.7 per cent from 21.5 per cent over 1901-2001.

The Bill also directly contradicts the ruling under Justice K. S. Puttaswamy (Retd.) and Anr. vs Union of India and Ors (August 2017) which clearly states – “Privacy includes at its core the preservation of personal intimacies, the sanctity of family life, marriage, procreation, the home and sexual orientation. Privacy also connotes a right to be left alone.” [Page 263] The judgement held the right to privacy as a constitutionally protected right emerging from the right to life and personal liberty under Article 21 of the Constitution of India.

Sir, as you may also fully understand that in complex socio-economic and political realities such as of Indian society, the proposed Bill raises several concerns on range of aspects. Following are some examples to mention for your kind reference --


We unequivocally oppose the proposed Bill, and register our concerns for any such policy level thinking which are extremely-anti poor, anti-women as they adversely affect both the democratic rights and reproductive choices of women, who are at the receiving end.

We are concerned that young women of the reproductive age group becoming tool to achieve demographic goals. This ideological position of the Bill is geared to control (and reduce) women’s fertility rather than improving women’s health and promoting women’s reproductive rights. Such policies disempower women, treat them as objects of control and surveillance, and violate the basic feminist tenets of reproductive choice and bodily integrity.

The proposed Bill should be deemed unconstitutional since they violate the right to equality guaranteed to all citizens of the country under Article 14 of the Constitution of India, it is a gross violation people’ human, reproductive and sexual health and rights as committed within India’s compliance towards International Human Rights Conventions and Treaties as well.

We strongly believe that incentives and disincentives will not improve quality and address the problems of equity and access to health services and they will not enhance the accountability of service providers to the community, especially to women and poor. These incentives and disincentives completely impinge on rights of women, poor and marginalized. Additionally, social protection as a form of incentive or disincentive by itself is a violation of human rights. All citizens of the country should fundamentally have the right to food, education, employment, health, and more regardless of the number of children they have.

The timing of the Uttar Pradesh Population Control, Stabilisation and Welfare Bill, 2021 in the context of an on-going pandemic that has led to social and economic devastation in the form of loss of livelihoods, hunger, escalation of domestic violence, and more completely dismisses the lived realities, needs, and concerns of the population at such a time.  The proposed Bill will further exacerbate these experiences through its proposed conditionalities and disincentives to ration, health care, education, employment, etc., creating deeper deprivation, loss of health and lives.