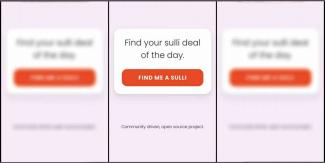 On 4th July this year, a twitter account holder by the name “k” tweeted about an App created for the “public auctioning”  of Muslim women. When this incident came to light, it led to an outrage on various platforms, as concerned citizenry spoke out in protest. The App was named 'Sulli Deal' and was available on Github; a platform for open source software. Through this App, Muslim women were being 'auctioned and sold' as 'deals of the day'. The photographs, twitter account information and other details of more than 80 Muslim women, including journalists, activists, students and artists, was shared on the App without their consent or knowledge. It is important to note that these women featured without their consent on this App were amongst those Muslim women active on social media and regularly share their opinion on the current socio-political situation around us. This act of auctioning off women is clearly an attack on their identity as Muslims and as women, even as it is sadistic sexual harassment and targeting.

Earlier this year, on the occasion of Eid, photographs of Pakistani and Indian Muslim women were stolen and auctioned on YouTube and Twitter by the 'liberal dodge' account. For instance, the National Convenor of the Congress Party, Hasiba Amin, was 'auctioned' for  77 paise (approx 0.010 USD). Haseeba Amin, in an interview with Feminism in India  says "I had lodged an FIR in this matter. I have full faith in my police Investigating Officer, but after talking to him, it seemed that he had little knowledge of social media. He asked me to change my phone, which I refused. I don't understand on what basis the investigation of cyber crime cases is handed over to officers who are not aware of social media? Had any action been taken in this matter earlier, it might not have been an incident of Sulli Deal and people would have had some fear of the law."

The result of the lackadaisical attitude then is that we are seeing a repeat of such incidents. A few months later, once again this App was created with the same intention of harassing, bullying, intimidating and trolling Muslim women. Not only this, the App was once again re-registered on Godaddy platform, even after strong protests and its temporary removal from Github.

The Modi led BJP government is a proponent of Hindutva (an extremist ideology which falsely claims itself to be a true carrier and adherent of Hinduism). After it came to power in 2014, there has been a drastically sharp increase in the cases of violence against Dalits and Minorities.

Being a former member and activist of the RSS, Narendra Modi is a believer and proponent of the ideology of the RSS  and propagates it through the government he heads.

The RSS's apologist icon Vinayak Damodar Savarkar appears to favour the use of rape as a political weapon against Muslim women. Many reports also confirm this. According to a Newsclick report, Vinayak Damodar Savarkar, in one of his books Six Glorious Epochs of Indian History clearly explains why “raping of Muslim women is justifiable and not to do so when the occasion permits is not virtuous or chivalrous but cowardly''. This report further bolsters its argument by sharing an excerpt from Savarkar's book which says “Once they are haunted with this dreadful apprehension that the Muslim women too, stand in the same predicament in case the Hindus win, the future Muslim conquerors will never dare to think of such molestation of Hindu women (para 451).”

The Prime Minister Narendra Modi himself follows people on Twitter who propagate the ideology  of extremist Hindutva and troll women as they support lynching by mobs and majoritarian violence. BJP leaders Kapil Mishra, Anurag Thakur, Parvesh Verma and many others have given anti-Muslim and anti-minority statements on which no action has been taken yet. In the recently held panchayat in Haryana's Pataudi, Rambhakt Gopal, the same person who fired a gun at the Jamia students during the anti-CAA movement last year, exhorted the people present in the panchayat to "kidnap Muslim women" in revenge for the alleged abduction of Hindu women. All these incidents cannot be seen in isolation from the ‘Sully Deal’; all of them are part of the same ecosystem of hate, bigotry and toxic masculinity that characterise Hindutva politics.

While talking about this issue in Feminism in India, Afreen Fatima Khan whose profile too was created on Sully Deal said, "this incident shows that Muslim women will get the status of 'sex slaves' in what has been envisioned for a complete Hindu Rashtra". The online harassment, trolling and abuse against the Muslim community has significantly  increased after the anti CAA-NRC movement in 2019, a movement that was in a big way led by Muslim women. Many women have pointed out that this trolling is Islamophobic. An Amnesty International report also states that "For Muslim women politicians in India, the abuse is more frequent and severe. 55% of the most aggressive trolling was directed at Muslim women leaders. In terms of types of abuse, Muslim women received 94.1% more ethnic or religious slurs than women from other religions.” Clearly, there is a pattern here which needs to be identified and acknowledged.

After the anti CAA-NRC movement, Muslim women have been the target of right wing Hindutva extremists. Even during the Shaheen Bagh movement, many sexist and misogynistic campaigns against them were run on the mainstream media and social media. Muslim leadership started becoming a part of mainstream politics after the anti CAA NRC movement. In particular, the participation of Muslim women increased. Sulli Deal is an attempt to stop these women from entering politics and from being able to shape public discourses through voicing an independent and assertive politics. Campaigns such as the Sulli Deal and other such Apps and platforms are a direct violation of the fundamental rights, such as the right to equality enshrined in Article 14 of the constitution, the right to live with dignity and the right to bodily autonomy protected under the Article 21 of the constitution.

Women are already deprived of using public places because of routine misogyny prevalent in the society. Social media is probably the only alternative present these days for women to be able to voice their opinions in relative ease thanks to the partial, anonymity offered by online spaces. Many reports affirm that such attacks against women exclude them from socio-economic political participation.

These figures of discrimination are likely to have increased during and after the CoVID lockdown. According to the National Commission for Women, in April 2020, 54 cyber crime complaints were received online, in comparison to 37 complaints received online in April 2019. In June, NCW received 100 cybercrime complaints. In January 2021, NCW chairperson Rekha Sharma stated that online harassment cases have seen a five-fold increase since the outbreak of the COVID-19. She said “While earlier we would record 300 complaints of online harassment, this shot up to 1,500 post the Covid-19 pandemic”. Plan International, a global survey revealed that 60 per cent of women have faced harassment on social media and one-fifth of them have either quit or severely reduced the use of social media.

'Sulli Deals' is a case of systematic intimidation, trolling and exclusion of Muslim women. Not only Hindu extremists but Muslim fundamentalists have also blamed the victims for this incident.So far, various organizations and its victims have filed cases in the Sulli Deal case. The victims of Sulli Deal continue to fight back, saying that they will not be afraid because the intention of the hate campaign was to scare them.