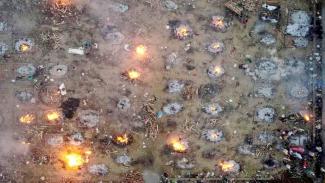 During India's deadly Covid second wave, Dainik Bhaskar was one of the only Hindi daily newspapers that did its job of truthfully covering the horror of oxygen shortage, overflowing crematoriums, and dead bodies floating in the Ganga. Likewise, the UP based TV channel Bharat Samachar also had diligently covered the crisis of oxygen shortage and resulting Covid deaths in UP. Dainik Bhaskar also covered the Pegasus political spying scandal. Predictably, the Modi regime, which tolerates only propagandist and sycophantic media channels and papers, has sought to punish real journalism. Offices of Dainik Bhaskar all over India, and the Lucknow office of Bharat Samachar were subjected to "IT raids" under the pretext that they were accused of "tax fraud".

In solidarity with the Dainik Bhaskar and Bharat Samachar, here is an excerpt from an op-ed in the New York Times on June 17, 2021, by the editor of Dainik Bhakar, Om Gaur.

The Ganga Is Returning the Dead. It Does Not Lie.

I am the national editor of Dainik Bhaskar, a Hindi-language newspaper that sells about five and a half million copies a day across India, mostly to readers in small towns and villages. To get a clearer sense of the devastation caused by the pandemic among them, we sent 30 reporters and photojournalists to walk the banks of the Ganges in major cities and districts in Uttar Pradesh.

Our reporters counted 2,000 bodies on May 12 and 13 alone as they traveled 700 miles along the river. The bodies weren’t only floating in it; on some days, 65 or 70 were washing up on its shores. Yet by our calculations, based on official data, the state authorities claim that just 7,826 people died from Covid-19 from April 1 to May 13. After more reporting, we estimated that between mid-April and mid-May some 4,000 corpses had been placed in shallow pits by the river along a stretch of less than one mile.

Uttar Pradesh has been governed by the Bharatiya Janata Party of Prime Minister Narendra Modi since March 2017, under Chief Minister Yogi Adityanath, a Hindu monk turned politician. Mr. Adityanath’s response in April to grave shortages of oxygen, ventilators and beds in intensive care units throughout the state and to the images of overcrowded cemeteries and crematories was to issue denials and threats. He directed state officials to invoke antiterrorism laws against and seize property from people he accused of spreading rumours.

Rural poverty has exacerbated the effects of the second wave of infections, but it was the Modi government’s callous disregard that triggered the latest surge. The authorities allowed the Kumbh Mela pilgrimage, one of the world’s largest religious gatherings, in the spring, as well as elections in several states, including Uttar Pradesh.

When Mr. Modi campaigned to become prime minister in 2014, he ran for a parliamentary seat from Varanasi, a holy city on the Ganges in Uttar Pradesh. He said then, “I feel Mother Ganga has called me to Varanasi.” Today, the Ganges is calling him out.