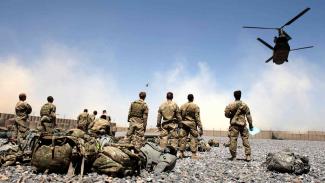 As the two decades of imperialist war waged by the US on Afghanistan come to a close, millions of Afghans were confronted with a tragic Eid ul-Adha with a bloody ongoing war between the Taliban forces and the Government of Afghanistan and its allied groups. While the end of imperialism should have been cause for celebration and jubilation, most Afghans seem to believe that the US withdrawal has been facilitated by a back-channel understanding between the Taliban and the US administration. The lives of millions of Afghans hang in the balance as many are forced to flee into neighbouring countries as a result of the fighting.

Gunar Olsen points out that the US state department maintains a myth that the war in Afghanistan is a ‘good war turned bad’.  This myth is perpetrated by the fact that while most of US acts of imperialism have been justified by events that have been proven to be false (think WMDs in Iraq or the Gulf of Tonkin incident in Vietnam), the horrific reality of the 9/11 attacks and the anger felt by the American public justified the US invasion of Afghanistan. Olsen points out that the opportunity to enact justice was rejected by the Bush regime when the US rejected the Taliban’s offer to extradite Bin Laden. While many Americans did oppose the war, the spectacular nature of the terrorist attacks made serious political opposition to the war untenable. Even ideological opponents of the conservative presidency of George W. Bush found themselves invariably supporting an imperialist war. ‘Feminist’ groups like the Feminist Majority Foundation justified the war in the name of ending ‘gender apartheid’ in Afghanistan.  Even former anti-imperialists like Christopher Hitchens turned into vocal champions of imperialist destruction in the name of opposing ‘totalitarianism’.  These trends coalesced into the so-called ‘War on Terror’ that became the foundational principle of global Islamophobia.

The Watson Institute for International and Public Affairs at Brown University estimates that over 800,000 people have been killed in the course of the war, with even more deaths unaccounted for.  We are forced to confront the question, why is the US withdrawing from the war at this point? The more conventional answer would be that having spent $ 6.4 trillion, in an ‘unwinnable’ war the US has realized its folly and is now withdrawing. The fundamental folly is the belief that ‘winning’ was ever the objective of the conflict rather than perpetuating an endless cycle of violence that would generate enormous profit for the Military-Industrial Complex. Peter McLaren pointed out as early as 2003 that the key motivation for the US was to secure oil and gas reserves in Central Asia by building a pipeline through Afghanistan.

The Taliban was propped up by the US in order to secure a compliant regime, who would facilitate the construction of the pipeline. The US withdrawal from Afghanistan is facilitated by a number of factors. The first is the growing demand for Green Energy, which means that over the next few decades, non-renewables would start to lose value, meaning that the US imperialist efforts would better be directed towards securing resources towards that end (Latin America having the largest reserve of Lithium being an obvious target). The second is that the US sees the increasing foothold of China in the region through the Belt and Road project in Central Asia and CPEC in Pakistan as a threat, and a war-torn Afghanistan could potentially throw in a wrench into the process. It would therefore be a grave error to mistake the reorganization of imperialist priorities for a ‘defeat’ of imperialism in Afghanistan.

The Taliban have claimed that they control 85% of the country, though certain areas seem to be putting up an obstinate resistance. Kabul seems to have been turned into an active battle zone, with a video emerging of the country’s president Ashraf Ghani offering prayers on Eid as rockets are fired all around. However, the Taliban sensing that their return to power may not be met with enthusiasm on the part of the various ethnic minorities in the country, have promised that they will not return to their old ways once in power. Its conduct so far has failed to inspire confidence. The killing of Danish Siddiqui demonstrates that its commitment to the freedom of expression remains flimsy and its contempt for even the rules of conflict.